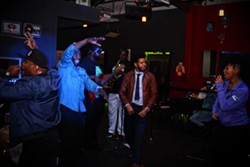 Culture Cinematic has existed since at least 2010, shifting musical identities at least once or twice in the process. But only in the last few months has the Oklahoma City-based jazz fusion band honed in on the identity that might be its truest form yet.

A recent lineup change and shift in approach saw its proper debut in November, when Culture Cinematic acted as the house band for the Oklahoma Hip-Hop Festival-sponsored event The Next Movement: A Tribute to the Legendary Roots Crew, which paid homage to the Philadelphia hip-hop band and Jimmy Fallon support group.

“That was really fulfilling,” said TJ Haverkamp, Culture Cinematic’s keyboardist and founding member, “because if you look at the history of jazz and hip-hop and just live instrumentalism, The Roots have been relevant for 25 or 30 years now. It was fun to step in those shoes a little bit.”

Haverkamp has a hard time defining Culture Cinematic’s sound, which is exactly the point of the group. The band represents elements of traditional jazz, funk and hip-hop with a special emphasis on merging the old with the new. Haverkamp said the band sounds like something different almost every time they play.

“What we’re trying to do now is always push the boundaries,” he said. “What we’re doing now goes with some of what we wanted in the beginning, which is a combination of technique — being proficient on your instrument — and technology.”

Connally, who has known Haverkamp since the two studied jazz theory together at the University of Central Oklahoma, said a person once described the band’s sound to him as “deep jazz” — a term that, in this case, has less to do with a certain type of sound and more to do with the Culture Cinematic concept.

“When you think of jazz,” Connally said, “you think jazz is very improvisational — it moves and it flows. If you took jazz and thought of it as more of a concept, it’s that we are evolving and moving and changing.”

The saxophonist said he wants to keep fans and audience members in suspense, wondering where the band will go next.

“I never wanted to be categorized or pigeonholed into one type of music,” he said. “Keep it moving; keep them guessing.” 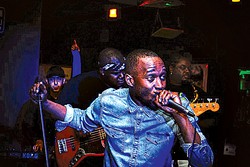 Haverkamp was once a member of the band Ice Water, which also featured local guitarist Jeff Mims. After that band split, the two wanted to keep up their working relationship, so they began throwing together collaborative gigs that combined their instrumental playing with laptop samples for a unique, new-meets-old aesthetic.

“Instead of always advertising TJ and Jeff, we decided we would be Culture Cinematic,” Haverkamp said.

Mims eventually got married and left the project to focus on other things. Haverkamp kept pushing and eventually met Eric Harris while the two were both teaching at UCO’s Academy of Contemporary Music (ACM@UCO). They became the new core of Culture Cinematic for several years.

Harris started a metal-jazz fusion side project called Local Man Ruins Everything, which began to pick up more and more steam locally. Eventually, Harris left Culture Cinematic to put all his attention into Local Man, leaving Haverkamp with another opportunity to reform.

When Haverkamp was ready to relaunch Culture Cinematic in 2016, he reached out to Connally, with whom he had previously played in the band Brother Enoch.

Though Connally is nearly 50 and has been playing saxophone since he was in high school, he is fairly new to the local music scene. Connally served in the military for 14 total years — six in the reserves and eight in active duty. In 2004, he started taking classes and going to school full-time at UCO, getting his undergraduate degree in music education. He met Haverkamp while working on his graduate degree, which he earned in 2008.

Connally said Haverkamp is responsible for getting him his start in local gigging, suggesting he play shows with him while they were going to school together. When he was invited to join Culture Cinematic, he was excited about the group’s open musical potential.

“I was able to explore a different side of things that was more diverse in many ways,” he said. “There are no restrictions on what we do. We just kind of explore music from a standpoint of jazz and we expand from there.”

Some bands have one clear leader who steers the group’s musical direction. In Culture Cinematic, each member has their own artistic visions that they would like to realize through the band, and Connally said everyone tries their best to accommodate that. They approach every new idea like it has merit.

“If one person takes the lead,” he said, “it’s not a compromise for us to follow after what they’re doing because all of us are interested in exploring.”

Culture Cinematic has recorded one EP and one LP. Haverkamp said he has come to realize that neither is a good representation of the band’s live sound.

“That’s caused me to really retool the equipment I use and the approach I’m taking to sound design,” he said.

In a general sense, Culture Cinematic is like the meeting of hip-hop producer J Dilla and traditional, instrumental jazz. Haverkamp’s digital effects, samples and keys are textured and anchored with skilled live performances. A lot of the band’s past recordings have been mixed in a way the band feels was too smooth and polished.

“If you hear us live,” he said, “we get into a lot of frequencies and upper harmonics that might pull the ear in a way you’re not going to hear on either the EP or the LP that we’ve released.”

Culture Cinematic is in the process of recording new material that more closely resembles its ideal sound. As of now, the planned album has no scheduled release date.

Culture Cinematic is, if nothing else, versatile. Band members are as comfortable putting their own spin on classics by The Roots as they are playing corporate company Christmas parties. But moving forward, the band would like to make sure each show they play is, in some way, fulfilling.

“We’re not just trying to be a cover band or a reading band, which is not a knock against anybody in the city,” Haverkamp said. “I’ve lived here seven years, and I told myself I’m not going to be in my 50s and 60s playing those types of gigs.”

With a talented group of players armed with their own creative visions, Culture Cinematic now has a lot of new tricks up its sleeve. Haverkamp wants to pull each and every last one for fans to see.

“The idea is to play shows where art is first and foremost,” he said.

Print headline: Grand Theatrics, OKC’s Culture Cinematic returns to its jazz roots with an eye on art and experimentation.