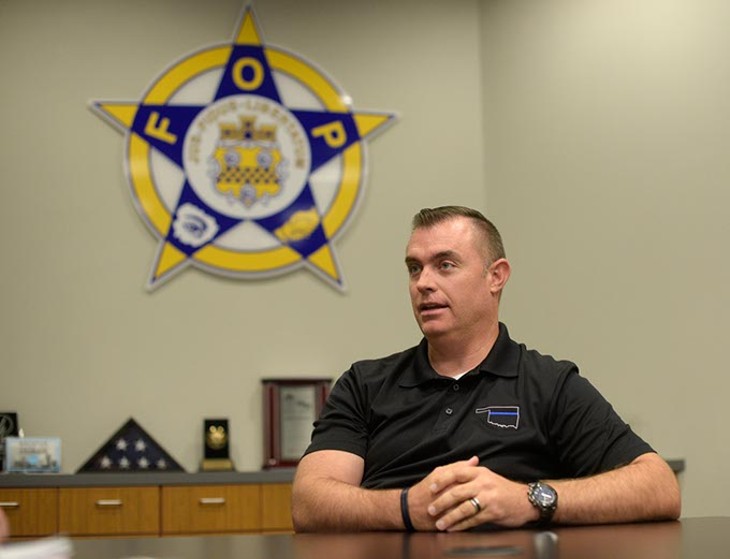 On July 1, the first day of the City of Oklahoma City’s new fiscal year, fire department officials removed Engine 51 from service at downtown’s Fire Station 1, relocating 15 firefighters to stations across the city.

Weeks earlier, after months of dwindling sales tax collections due in part to a reduced sales tax base as residents’ online shopping habits increased, the Oklahoma City Council passed a $1.38 billion budget for the 2018 fiscal year with slight cuts. The fire department, which was forced to cut spending six months earlier in mid-year budget cuts, was forced to remove its second engine from a station serving an ever-growing downtown community.

“We are in need of Engine 51 more now than ever with all the downtown development,” Scott VanHorn, International Association of Firefighters (IAFF) Local 157 president, told Oklahoma Gazette from inside the union’s downtown headquarters. “Since the first of this year, they have been what we call ‘browning out’ fire trucks. Sometimes the brush rigs. Sometimes the rescue ladders. We desperately need for that to cease. We need all of our trucks in service.”

Oklahoma City, like many other Oklahoma cities, relies heavily on sales tax dollars as a source of revenue for its general fund, which acts as a catchall fund for day-to-day city operations. Public safety, which also includes the police department, makes up 64.6 percent of the general fund. Diminishing sales tax revenue has resulted in city hiring freezes, which impacted public safety greatly in recent years.

A proposal before voters on Sept. 12 stands to reverse those hiring freezes.

An analysis ordered by the council on police department staffing suggested the city maintain at least 1,300 officers. Currently, the city has approved 1,105 police positions but employs between 1,070 and 1,075 officers, Nelson said.

“We are anywhere from 200 to 230 officers below what the department says we need in order to effectively police the city,” he said. “Council had made it a priority to fund positions. … Then the revenue started declining and those positions were not funded.”

This past spring, the FOP filed two grievances with the city after obtaining records that revealed patrol shifts hit below minimum staffing requirements. When a police force is pared down, like a fire station placing fire engines out of service, response times increase, negatively impacting public safety.

This past spring, as council members heard less-than-ideal budget projections, murmurings of potential answers to the expiring 1-cent MAPS (Metropolitan Area Projects Plan) began to surface in city hall. By April, it was clear that Mayor Mick Cornett wanted a solution for restoring public safety funding.

The council sends three proposals, including extending the 1-cent MAPS tax for 27 months to benefit street infrastructure, before Oklahoma City voters on Sept. 12. Voters will also be asked to weigh a quarter-cent permanent sales tax to contribute to the city operations fund with an emphasis on benefiting public safety positions. If approved by voters, the new sales tax would send $26 million into the city’s budget and result in the hiring of 129 officers and 57 firefighters.

Both the police and fire unions are backing the quarter-cent permanent sales tax, along with the continuation of the MAPS tax and the $967 million General Obligation Bond package.

For the fire department, 15 of those 57 additional positions are designated for Engine 51 operating from Station 1. The remaining 42 positions will be split among two new fire stations, which are proposed in growing parts of south Oklahoma City and will be financed by remaining 2007 general obligation bond funds, VanHorn explained.

If passed by voters, the city would increase its patrol officer positions, said Nelson, who explained that despite the city’s growth over the past two decades, the department continues to employ the same number of patrol officers.

Both the police and fire departments stand to benefit from the proposed 2017 General Obligations Bond program, which utilizes property taxes for infrastructure projects ranging from streets and bridges to drainage and parks. Proposition 12 earmarks $30.8 million for the police department with funding distributed among infrastructure projects, including a new police aviation facility. Proposition 13 would send $45.3 million toward fire department facilities, including the replacement of three fire stations.

Both the propositions contribute to constructing a police and fire training center to replace the aging facility utilized by both departments at Oklahoma State University-Oklahoma City (OSU-OKC). A new facility is proposed for land near Interstate 240 and Air Depot Boulevard.

“It’s a good facility,” said VanHorn, who joined the fire department 28 years ago and trained at the OSU-OKC site. “There are lot better and newer ways to train firefighters now.”

Both unions are confident their members’ needs will be met through the proposals. The two joined the Yes Safer Streets Better OKC coalition, a grassroots group in favor of the three proposals.

“This will get us a long way down the road in a really responsible manner,” Nelson said. “We are excited to potentially have the tools and resources available to do what we need to do.”

What’s on the Sept. 12 ballot for Oklahoma City voters?

» A 10-year, $967 million general obligation bond package to invest in city facilities. Voters will decide on 13 propositions, each to be voted on separately.

» A permanent quarter-cent sales tax for city operations. The tax is expected to generate $26 million annually to fund police services, fire protection and other critical services.

If OKC voters approve the 27-month continuation of the expiring 1-cent MAPS tax and a quarter-cent permanent sales tax, the city’s sales tax rate would rise from 3.875 to 4.125 percent. Since counties can collect an additional sales tax, the total for local and state sales tax is as follows: