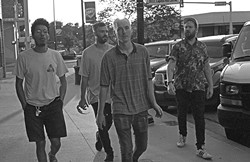 It took nearly two years for Sex Snobs to get its newest album Emotional Stuffing out to the masses.

The actual recording process for Emotional Stuffing took just two days, but Hammontree and Barnard said in a recent Oklahoma Gazette interview that getting their analog-recorded album mastered and picked up by a label (the album was released July 26 on Kansas City’s High Dive Records) took much longer.

Hammontree and Barnard elaborated to Gazette about working with Albini, the themes within Emotional Stuffing and Sex Snobs’ future plans.

Oklahoma Gazette: On the new album Emotional Stuffing you worked with producer Steve Albini. How did you get to working with Steve and how was that experience?

James Hammontree: We were looking at new places to record and were wanting to do something pretty hi-fi and as good as we could possibly get. I always knew smaller bands recorded with him, but it’s kind of hard to tell. Some big studio engineers will record smaller bands, but you never really know. I just sent him an email and he called me 45 minutes later. It was really weird.

OKG: You always hear about how he works with some of the smaller bands, but you never know what’s going on behind the scenes.

Alex Barnard: Yeah. He’s kind of like a mechanic or something, he gives you different rates. We got kind of a lower rate because it was slower and it was winter. He had a cancelation.

Hammontree: Yeah, we drove up there [to Chicago] I think in February and [the weather] was pretty terrible. But he was a blast to work with. I think we did our whole session in two days — we really squeezed it tight. We could have done more, it could have been longer, but while he will record anyone, it is definitely expensive. We were eating rice and beans. It took us a little bit to recover from all of that. But at the same time, it was one of the first times recording an album that I felt totally comfortable with an engineer that I could completely trust. So it was easy and you were able to focus on what you were doing as opposed to worrying about how it will turn out, because you know it’s going to turn out good.

OKG: In the recording process, was there anything he had you all doing that was revolutionary or different to you all?

Barnard: We did live tracking, which we’re all used to and comfortable with. That wasn’t anything that different. But it was more about listening to what it was able to sound like in that high-end [studio]. Just his methods and stuff were more inspiring. We were just like, “Wow! We sound pretty good.” But as far as going about recording, it wasn’t anything too alien to us or anything.

Hammontree: It was more just kind of his specs and knowledge and gear. Just on the drums alone he used 12 mics maybe. The whole entire drum setup is over $150,000. It was a lot of modern stuff, but also a lot of stuff from like Russia in the ’50s. He has a pretty odd mic setup when it comes to drums. It’s sort of what he’s known for. Just watching him work and how fast he would be at editing — it was pretty no frills. Just a lot of knowledge and nice equipment.

OKG: In terms of lyrical themes on the new album, is there anything specifically that you all were going for?

Barnard: Whenever we write lyrics or I write lyrics, I kind of have this rule that they can be personal, but not autobiographical. I don’t want it to sound like you’re hearing a story about a person. They need to be more universal in that way and more appealing. But I don’t know, I’m trying to think about where I was at when I wrote it. A lot of the stuff on that record had to do with sort of feeling alienated with very mundane, normal, day-to-day things — going to work or paying rent or whatever. But then, honestly, some of the songs on there were written like, “Holy shit, I need to get this done; I’m going to Chicago!”

OKG: One good song on the album is “Black Friday,” which talks a lot about malls. Do you all have any mall memories or connections to the mall? Were you the types of kids who spent hours aimlessly wandering around?

Barnard: I can’t speak on behalf of anyone else in the band, but as far as me and James are concerned, James, when he was a kid, grew up on the south side of Oklahoma City and then his parents moved to Edmond during the middle school-high school time of his life. I grew up in Norman and my parents moved me to Edmond in the same time. We got moved to suburbia and that’s where we met when we were teenagers. So yeah, lots of walking around the mall.

OKG: Are there any other projects with this band or anything else you all are associated with that we should know about?

Hammontree: Really, just this tour. I think it’s 17, 18 shows. That, the Wavves show and, whenever we get back, working on the next album. We’re trying to pitch that to labels. Maybe a West Coast tour in February. It depends on how much money we’ll have, how well this tour goes and how the recording comes along. A lot of it is just finding the next beneficial thing as far as who’s going to put the next album out. Going on tour is a nice way to pitch that to people. But, really, we’re focused on finishing the record.