Getting your higher point alcoholic beverage in Oklahoma might be a bit cumbersome thanks to the state’s antiquated liquor laws. We can’t buy vodka after 9 p.m. or on Sundays, just to name a few of the restrictions. However, to make your venture for bourbon (or anything with more than 3.2 percent alcohol) less annoying, here are a few places to help you find your fix. Now the only real hassle left for you might be navigating through a hangover and that stabbing lump of regret.

Pancho’s Liquor Town 6801 N. Meridian Ave. 721-7351 Pancho’s cares about its patrons. It has been family-owned and operated since September 1959, and Joyce Shadid, the matron of the family, still takes care of the store with the help of her daughter, her son-in-law and her grandson. Pancho’s — named after the patriarch who died in 2010 — boasts a dedicated 4,000 feet of space to their wine selection, more than 50 single-malt scotches and small-batch bourbons. And they try their hardest to keep their prices as low as possible, manager Brenda Wilson said.

Pancho’s Liquor Town offers senior discounts every Tuesday and Lady’s Day discounts every Thursday. On those days, qualifying patrons receive 12 percent off any wine and 5 percent off of any beer. The store also offers party consultation, so if you need help deciding how much booze you need for your bat mitzvah or wedding, just ask the owners. 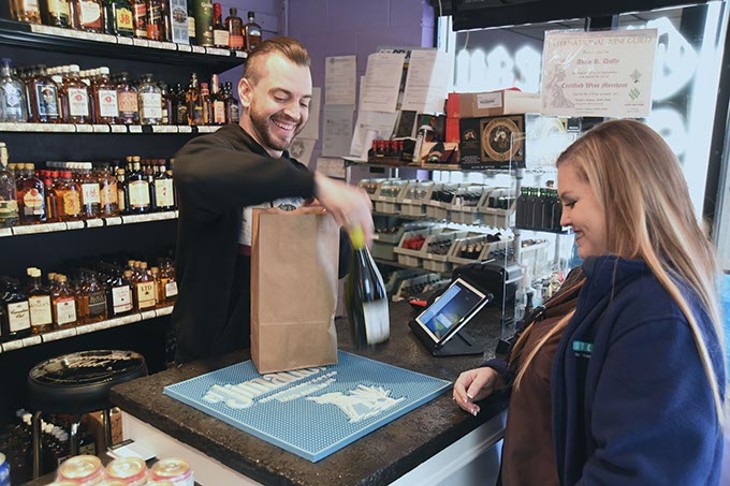 The Wine Gallery 12000 S. Western Ave. 735-8700 Adam Duffy, owner-operator of The Wine Gallery, personally researches the wine selection that is available in Oklahoma. He spends a great portion of his time reading magazines and online sources to find his wine selection. The Bourbon and Scotch selection at the store is huge, with more than 100 craft whiskeys that retail for more than $30. Duffy also provides a pick six that allows patrons to choose what their six-pack is made of so they don’t have to risk buying beer that they don’t care for.

Andy’s Liquor Store 2720 S. Midwest Blvd. 737-5085 Serving Midwest City since Prohibition ended in 1959, this package store specializes in customer service. Andy’s is currently selling half pints of Hornitos tequila for half price ($3.99) and has specials on Jose Cuervo Cinge half gallons for $20. The store has a running special of 10 percent off any case of wine and 5 percent off any case of liquor. Get your Irish beer and whiskey at a discounted price for St. Patrick’s Day.

In Good Spirits 12233 N. Council Road 470-5819 In the spirit of good booze and great times, In Good Spirits wants its patrons to have an experience they won’t forget when they come to the store. With a helpful and friendly staff, the store offers more than 700 wines and 50 local and domestic craft beers. It’s offering 15 percent off any wine through March. It also holds wine tastings and 12 new scotches. It also takes requests; if there is something you need that they don’t keep in stock, just ask and they will get it for you.

Broadway Wine Merchants 824 N. Broadway Ave. broadwaywinemerchants.com 231-0031 Artisanal drinks abound at Broadway Wine Merchants. Located in downtown OKC, this 3,500-square-foot package store focuses on offerings from small-production wine and spirit facilities that have less than 1,000 case productions. This means that more obscure beverages can be found there. The store offers 650 different craft beers, from local to domestic and international breweries. The store has around 70 different bourbons and more than 100 different scotches in stock.

Modern Liquors 2918 N. Pennsylvania Ave. 528-6995 This family-owned liquor depot was once a grocery store but has been selling nothing but booze for more than 30 years. It offers more than 200 brands of brews and 1,000 types of wine. The abundance has the little shop crammed from floor to ceiling with bottles of social lubricant. To remedy the tight space, the family behind Modern Liquors is looking to expand its shop.

Sean’s Wine & Spirits 6969 Northwest Expressway 728-7300 Every Tuesday, this 18,000-square-foot panacea of social engagements has 20 percent off of every bottle of regularly priced wine. It also has special craft beer and a large selection of regular beer. The store singles out its beer packages so customers can try the beer without having to fully commit to a six-pack. With the largest beer wall in the state, you can find the beer you know and love while also experimenting.