An after-school job to pay for a broken BMX wheel extended into a three-decade career in bike shops.

Steve Schlegel of Schlegel Bicycles found his calling back in 1980 when he was a bruised-up kid pushing his busted BMX bike across northside Oklahoma City. A nearby bike shop named House of Wheels was still under construction, but Schlegel needed to get mobile again as soon as possible. Twelve at the time and an expert rider in the 12-16 age range, Schlegel had bent his front wheel while propelling himself over dirt mound after dirt mound as he prepped for a run at Grand Nationals. This was three years before fellow Okie Mat Hoffman would begin his revolutionary career and six years before the movie Rad would cement BMX as one of the decade’s mainstream legacies.

“I, arguably, had the first quarter pipe in the city for bikes,” Schlegel said with a wry smile. “I remember that, right as we were pulling that portable ramp out of our driveway, our mailman showed up with the newest issue of BMX Action magazine, and on the cover was the first image I’d ever seen of bikes on a quarter pipe.”

So young Schlegel was ahead of the curve but also down a wheel. When he finally arrived at House of Wheels, he peered inside for signs of life, knocked on the door and was startled when a gruff and imposing figure emerged: Jim Mueller, Schlegel’s future mentor.

“I was nervous, and my hands were shaking. He took the wheel from me and said, ‘Come back in a couple days,’” Schlegel said. “When I went back to pick up the wheel, I realized I’d been a bit naïve about how much it was gonna cost. I asked if I could work it out, and he said, ‘Show up after school tomorrow.’ I’ve worked full-time in a bike shop ever since.”

Schlegel’s career took him from House of Wheels to The Bicycle Store on the north side to opening Bicycle Store Too on the south side in partnership with Mueller. Schlegel Bicycles, 900 N. Broadway Ave., opened in Automobile Alley in 2007, and Schlegel will celebrate his 38th year of fixing busted wheels for other ambitious racers of all disciplines, whether road, mountain or track. 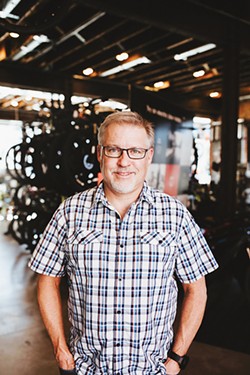 He said the move downtown was to appease the clientele he’d collected across the metro and beyond.

“You get these different mentalities from the north-siders and the south-siders; there is this distinct dislike they have of each other, so when we moved downtown, it was this neutral ground between them,” Schlegel said. “The average bike shop usually draws the bulk of their business from a five-mile radius. We proved ourselves to be a destination. Customers were driving in from Tulsa, Lawton, sometimes even Texas and Kansas for some of our high-end business.”

A lot has changed in the sport since Schlegel started fixing flats in 1980, and it’s now driven by technology and high-end accessories.

“There are so many electronics that go along with bikes now like Garmin cycling computers and multisport running watches that go for $500,” Schlegel said. “They are going for about what people used to spend on an entire bike.”

And like all retailers in the modern era, online shopping has shifted Schlegel Bicycles’ focus so it relies on service rather than just volume selling. That service begins with the first step of finding the right bike.

“People don’t come out of cookie-cutters, which is why quality bikes come in an array of sizes,” Schlegel said, explaining the shop’s Fit First Philosophy. “When I hear from people who tried cycling but didn’t stick with it, I ask them what got them out of it. Generally, it is they didn’t feel comfortable on the bike or didn’t feel safe.”

Schlegel said that customers at a bike shop can have a conversation with the staff about the kind of bike they need, how frequently they’ll be using it and how they’ll be using it, which will then narrow the options, making the decision more manageable. If someone is just looking to pedal around the lake a few times a month, they don’t need a bike designed for a completely different purpose, say screaming down a mountainside at 80 miles per hour.

Schlegel’s promotion of cycling extends beyond the store and to helping with organizations and events across the state, including DNA Racing and the Oklahoma City Pro Am Classic that takes over downtown in early June. Schlegel said that the Pro Am is meant to pair up with the Tulsa Tough, which is three days of races, including Cry Baby Hill, which he describes as one of the biggest races in the country in terms of fanfare.

“It’s gotten kind of bad, like an out-of-control frat party,” Schlegel said, laughing. “Tons of people show up just for the party but don’t really care about the race.”

Though Schlegel has continued competing in various forms of cycling over the years and wants to continue promoting the development of sport within Oklahoma, BMX remains his first love. He said the shop looks for opportunities to try to support BMX but is also dependent on local support.

“You’ve gotta have people doing it,” Schlegel said, noting that the sport is susceptible to ebbs and flows in popularity because of the higher risk of injury. “You name it, I’ve touched it, but BMX was the foundation. Bike-handling skills and sprinting are difficult to teach older people, so I’m fortunate to have that background. I revisited BMX two or three times but realized I don’t heal quite as well so had to back away, but you see that a lot. It becomes more of a transition. Us old BMX guys don’t really quit; we just become mountain bikers or road racers.”