Faith and begorra, is it already St. Patrick’s Day again? Whatever your heritage, it’s fun to celebrate the day when everyone is at least a little Irish. If going old-school by converting some druids to Catholicism and allegedly driving all the snakes off an island is too much work, you can still get in on a few decidedly American traditions. Wear green to ward away pinches, enjoy a mug of green beer or sit down to a meal of corned beef, potatoes and cabbage. Here are a few local retailers happy to make St. Patrick’s your lucky day.

Whether they’re native to Oklahoma or Ireland, it doesn’t matter — potatoes and cabbage (aka colcannon) is a hearty, healthy meal for anybody. The combination isn’t exclusive to St. Patrick’s Day, but there really is no bad day in which to enjoy this dish. Cabbage is especially good for the body, with lots of vitamins K, C, B1, B2 and B6. Native Roots Market has plenty of potatoes and cabbage (and other fresh, local produce) waiting to spend some time in your skillet or stockpot before enriching your diet.

Since its inception in 2013, Oklahoma Shirt Company’s Shirt of the Month Club has sent Oklahoma-themed tees to subscribers across the state and all over the U.S. Every March, it dedicates a shirt to both the Sooner State and St. Patrick’s Day. This year’s design features a four-leaf clover dreamcatcher inset with tiny Oklahoma outlines on a bright green shirt, perfect for shutting down unwanted pinching and filtering out bad dreams.

Okay, shush. It’s very loud all of a sudden, and maybe, just maybe, we all went a little crazy last night. If you’re nursing a post-party hangover, kill two birds with one stone (they’re very loud birds) and grab some coffee at Leaf + Bean. The water is good for hydration, and the caffeine will help knock that headache out of commission. Plus, when you get your coffee from Leaf + Bean, you know you’re helping support Oklahoma City’s vibrant coffee culture. Three birds! Was that too loud? Shh. Three birds.

Nobody wants to “Irish down” a cup of coffee. Irish-ing always happens upward, which is a good reason to head uptown to Byron’s Liquor Warehouse for any boozy St. Patrick’s Day beverages. The store sees an uptick in traffic for the holiday, so it will be having a few sales on Baileys Irish Cream, Jameson Irish Whiskey and Guinness beers, among others. Having a Leprechaun-sized gathering? Byron’s will put together some small packages of Irish-themed liquors, as well.

Bambino is definitely Italian for “baby,” but Green Bambino staff isn’t exactly checking IDs at the door to find provenance of the store’s infant clientele. Though the green in its name refers more to an environmentally friendly approach to parenting, Green Bambino does carry a lot of literally green items, including bamboo baby blankets, diapers and baby dishware. 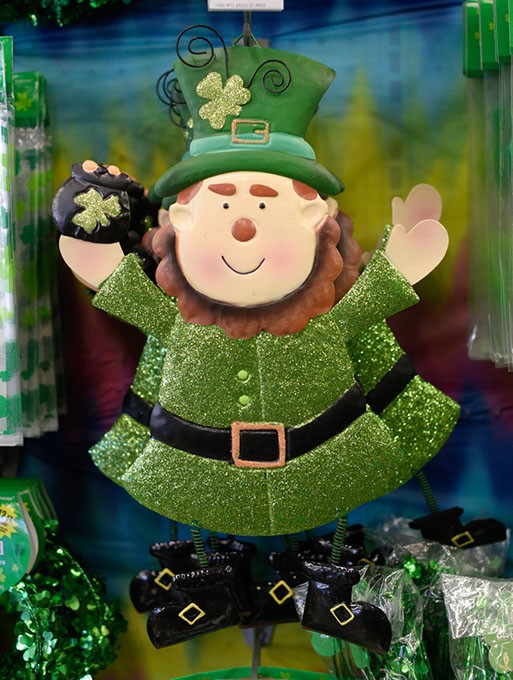 If you like to party like it’s 14th-century Ireland, Party Galaxy has you covered — literally covered if you’re talking about glittery hats, leprechaun beards and shamrock-printed clothing of every sort. While you’re there, it’s probably a good idea to stock up on future holiday party supplies, too. Easter is in April, and Cinco de Mayo is in Mayo, so grab some plates and a bunny costume and start partying.