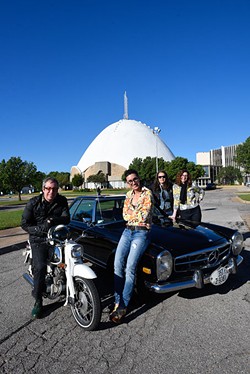 Last month, the Gold Dome at NW 23rd Street and Classen Boulevard found a savior when Natural Grocers, a Colorado-based organic grocery chain, agreed to purchase the property while maintaining the architectural integrity of the landmark bank building with the anodized geodesic roof. What was described in 1958 as the “bank of tomorrow” soon will be the health food store of the near future.

But while the Gold Dome survived, many other examples of Oklahoma City’s midcentury modern architecture have succumbed to redevelopment projects or were bulldozed for parking lots or oil wells.

Okie Mod Squad, a group of architecture and design enthusiasts, celebrates the aesthetic and pushes for its preservation during its inaugural Oklahoma Modernism Weekend, a series of parties, tours and other events highlighting the sleek lines of Oklahoma’s great monuments to modernism May 20-22 at First Christian Church, 3700 N. Walker Ave.

Terri Sadler, an Okie Mod Squad leader who works for fitzsimmons architects, said the group’s goal for the event is to inform and celebrate as well as preserve and protect an important part of the state’s cultural history, one that was forged by legendary Tulsa-raised architect Bruce Goff and his students at the University of Oklahoma.

“He was the mastermind genius of everything that is cool in Oklahoma,” Sadler said.

The term “genius” unequivocally applies to Goff. At age 22, he designed Boston Avenue United Methodist Church, an ecclesiastical art deco masterwork in downtown Tulsa. As post-World War II tastes moved toward a sleeker, space-age aesthetic, Goff became one of the brightest lights in modernism. Examples of his influence are seen throughout Oklahoma City, including First Christian Church at NW 36th Street and Walker Avenue, architect R. Duane Conner’s 1956 design and engineering marvel that also is the centerpiece of Oklahoma Modernism Weekend.

Events kick off 7 p.m. May 20 at the church with the Mod Market preview party, where early shoppers can find art, design elements and furniture before the official Saturday opening. Also, local vintage clothing retailers will host the Flashback Fashion Show, where models showcase classic attire from the 1950s through ’70s.

Guests also can take an architectural tour of the church 1 p.m. May 21 for $10, followed by a presentation of the venue’s history and its architects. The event wraps up noon-5 p.m. May 22 with the Okie Mod House Tour. A chartered bus tour makes several stops at old and new modern homes in neighborhoods such as Quail Creek, The Greens, Plaza District and Edgemere Terrace, among others.

Robyn Arn, event co-organizer, said that the buildings on the tour are indications of how Oklahoma strongly bought into the aesthetic. The “Arrows to Atoms” marketing campaign of the 1950s helped push the style, including many of the buildings at State Fair Park, and coincided with the golden anniversary of statehood.

“When we had the 50th anniversary of the state, we were wanting to be positive, futuristic and forward-looking,” said Arn, a director, actress and Okie Mod Squad co-founder. “So a lot of the businesspeople were wanting to embrace that.”

Bank buildings were particularly common and included the Gold Dome, 1959’s Central National Motor Bank at NW Fifth Street and Classen Boulevard and 1964’s Founders National Bank at 5613 N. May Ave. However, many of these structures are listed as “threatened” by Okie Mod Squad, which monitors the status of midcentury landmarks.

“You know, a lot of us were involved in trying to save the Gold Dome, so that is in our background as well,” Arn said.

Demolitions of midcentury modern properties like Stage Center, 66 Bowl and Continental theater received much press attention, but others disappeared with little fanfare. Recent losses such as Classen Terrace Building and Norman’s Goff-designed Bavinger House underline the threat to this generation of architecture.

“There are a lot of history buffs in this group, and we want to promote the history and support the future for these structures. Stage Center and Bavinger — if you want to get this group’s blood boiling, just mention both of those,” Sadler said. “It’s a travesty.”

While Mad Men and the smooth lines of Sterling Cooper & Partners’ Manhattan office space did wonders to re-popularize modernism in the past decade, Okie Mod Squad’s affinity for the form predates Don Draper.

Sadler was living an entirely different lifestyle when a furniture bargain caused her to re-evaluate her tastes.

“I used to live in a log cabin, an original log cabin out by Lake Arcadia that had very mountain-man furnishings,” she said. “One day, I went to an antique store on Western and saw an Adrian Pearsall sofa and fell in love with it. It was, like, 14 feet long, and it looked so good in that log cabin. That was in ’86. I probably paid $125 for that sofa. Now, you couldn’t touch that for less than four grand.”

These days, Sadler surrounds herself with midcentury modern furnishings. She, along with Arn and Lynne Rostochil, Conner’s granddaughter, started Okie Mod Squad when their shared affinity for the design became evident after a series of cocktail parties.

But Arn said that there are real estate developers in the city who respect these properties and will find ways to preserve OKC’s futuristic history.

“There are some that really do say that these older building are who we are,” she said. “They are beautiful, and we shouldn’t tear down who we are.” 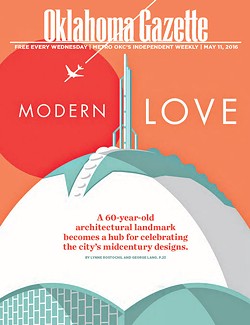 Editor's note: The online version of this story was updated May 16, 2016, to clarify the First Christian Church address.

Join the party All events are free and located at First Christian Church, 301 NW 36th St., unless otherwise noted.