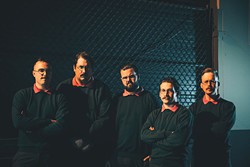 Somewhere along the United States’ intricate highway system is a lonely, late-night breakfast stop. Around 2 a.m., a large, unmarked van pulls into the parking lot. From the vehicle emerges a crew of five men dressed as clones of each other. Almost all of them wear the same glasses and bushy moustache. They’re sporting identical pink collared shirts, green sweaters and gray pants as they walk through the restaurant’s front door.

It’s a familiar scene for Head Ned, the vocalist, songwriter and cofounder of Okilly Dokilly, a screaming, intense hardcore metal band with a theme based on The Simpsons’ unfailingly cheery and devoutly religious Ned Flanders character. But for the diner’s other patrons, it can be quite a spectacle.

“You get a lot of looks,” Head Ned said during a recent Oklahoma Gazette interview. “Sometimes I forget how it looks to others seeing these five guys pop out of a van like this.”

The Phoenix quintet bills itself as a “Nedal” band. The unlikely genre has transformed the medalcore act into an internet phenomenon. It launches a short, two-week tour with a June 30 show at 89th Street - OKC, 8911 N. Western Ave.

Head Ned said his experience in Okilly Dokilly, founded in 2015, has been truly unique. The first official band purchase was a complete The Simpsons DVD box set. Each member owns multiple duplicates of Flanders’ trademark outfit. Nobody steps onstage without a green sweater.

“We are kind of like cartoon characters,” Head Ned said. “You look at our closet in our hotel room and it’s just polo, sweater, polo, sweater and five pairs of gray pants just hanging up there.”

Though clever, band members keep pseudonyms so their real names are not forever associated with a project that Head Ned admits is a novelty.

It should surprise few to learn that Okilly Dokilly is the byproduct of an inside joke. Head Ned and his friend Bled Ned pitched funny band concepts back and forth until the band name and concept took shape.

“We never intended on actually making it a band,” Head Ned admitted. “We were just making ourselves laugh with the concept of a band that was really heavy visually, the music is all crazy and aggressive but then they just had a crazy nickname — something that didn’t fit.”

They told some of their other musician friends about the idea, and they were surprisingly enthusiastic.

Head Ned soon began taking steps toward making the band a reality. They took band photos in complete Flanders costume and put up a Facebook page.

To the vocalists’ surprise, the page garnered around 500 likes in one night, far surpassing the popularity of any other bands he has been involved with. By the next day, they had close to 7,000 likes. They had around 20,000 Facebook fans by the end of the week.

“We were caught completely off guard,” Head Ned said. “We thought we would be playing tiny local shows in bars and things. The fact that this caught on was definitely not according to any plan.”

Head Ned said his favorite thing about the band’s unexpected rise on social media was that it soon became a trending news story on Facebook.

“Usually, all the trending stories in the news are just something depressing or terrible,” he said. “To be something goofy that made people laugh and being considered news, it was nice to be a little break from all the sad stuff out there.”

Head Ned’s musical background heading into Okilly Dokilly is quite different from the dense metal he plays now. He has jumped around punk and alternative subgenres within Phoenix’s DIY (do-it-yourself) music scene. He said a lot of his past bands have been compared to Weezer.

Okilly Dokilly self-released its debut studio album Howdilly Doodilly in November. It was preceded by the video single “White Wine Spritzer,” which now has more than 2 million YouTube views.

Head Ned said he is taking a break from writing new material for the band but hopes to begin work on a second album soon. The writing process for Okilly Dokilly might be a little easier than other bands he has written for, but it is also a lot different.

Usually, he starts with some internet research or an idea of his own, extrapolating a certain Flanders quote into lyrics or a song theme, he explained. Many of the band’s tunes are comprised entirely of quotes from Flanders and other Simpsons characters.

“You kind of have a box to work within,” Head Ned said. “You don’t have to conjure lyrics or really delve deep into any huge poetics, and you get to watch a whole lot of The Simpsons, which makes it great.”

Okilly Dokilly has experienced a fair share of haters and critics. Some claim its music is too gimmicky or not heavy enough. He said he does not mind getting feedback, even if it is negative.

“That’s great,” he said, “because what’s a Ned Flanders band without a bunch of Homers?”

Head Ned grew up with The Simpsons and has seen nearly every episode, albeit over the course of the series’ incredible 28-year run. He might not know everything there is to know about the show, but there are few things about the Flanders character in particular that he does not know, especially since launching Okilly Dokilly.

Constantly performing as the Flanders persona has also given him a new appreciation for the Simpsons’ obsessively cheery neighbor. Because of the band’s absurd theme and style, fans sometimes feel free to heckle the group. Remaining placid in the face of mockery is more difficult than it looks.

“One thing about Ned is how constantly friendly he is and how unfazed by criticism he is,” he said. “When we’re living and embodying the Ned character, you realize how difficult that is for a lot of people.”

Other bands might not gig while emulating cartoon characters, but Head Ned said that does not make Okilly Dokilly any less authentic.

“Every time you’re onstage, you’re some kind of character,” he said, “even if the character is just yourself with a guitar.”