If Robert Taylor has a favorite painting he has made, it is probably included among the more than 60 pieces collected for his career-encapsulating exhibition at Fred Jones Jr. Museum of Art.

“An old joke among artists is that when you get asked, ‘What’s your favorite painting?’ a real honest answer is, ‘My next one,’” he said.

Taylor is the sixth artist to be featured in the art museum’s Jerome M. Westheimer, Sr. and Wanda Otey Westheimer Distinguished Visiting Artist series, which highlights the career work of a select artist. Past honored artists have included James Surls, Christine Nofchissey McHorse and Hung Liu.

The exhibit will be on display through Dec. 30 at the University of Oklahoma’s Fred Jones Jr. Museum of Art, 555 Elm Ave., in Norman. Admission to the museum is always free.

The exhibit’s works include a 30-year swath of pieces from Taylor’s career. Going through his work and picking out what he wanted to display, the artist could not help but notice certain progressions.

His vibrant palette has remained more or less consistent over his career, but he can look at the imagery in an individual painting and recall where his thoughts were when he made it.

“I think I’ve gotten a lot better,” he said. “When you look at the older pieces, you can see why artists often retouch their older work, because you never really finish with it. You always think you’re better or you want to do this or that.”

A museum committee selected Taylor as a distinguished artist. Some of the artist’s work is already included in the museum’s collection, but Taylor said that is the extent of his past work with Fred Jones. The artist has exhibited in and received awards from the Los Angeles Contemporary art fair, Red Earth Festival and Smithsonian Institution, among others.

Still, Taylor said he is honored for his inclusion in the series and that the exhibition is the likely pinnacle of his career. 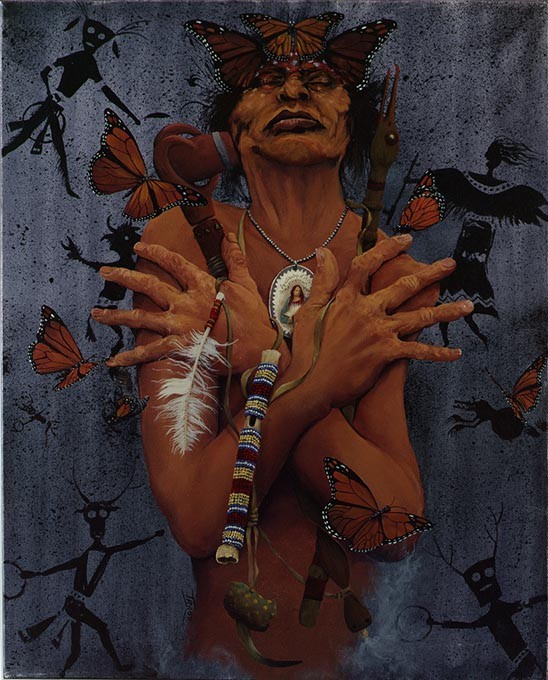 Taylor’s earliest interest in art can be traced back to early childhood sketches he would do of eagles and other animals. His uncle was a wildlife artist and showed him a few techniques.

“I still remember at one of our family get-togethers, at 6 years old, him teaching me to doodle this bald eagle’s head,” Taylor said. “To this day, I still doodle it.”

He drew for years but always imagined himself as more of a writer than an artist.

In 1970, Taylor was drafted into the U.S. Navy, where he served through 1972. At the time, he was stationed near Chicago.

The heat of the Vietnam War and general social-political unrest across the country proved a fertile environment for underground newspapers. While in the Navy, Taylor would submit columns he’d written to underground papers but never got anything printed. One day, he decided to try submitting a cartoon instead.

“Lo and behold, they actually used some of my illustrations and cartoons,” he said. “But still not a word I ever wrote.”

When Taylor left the military, he knew he wanted to pursue art full-time.

Though he is Native American and paints Native imagery, Taylor said he has never thought of himself as a Native artist, but an artist who just happens to share that ancestry.

Taylor avoids labels to keep his art free from outside expectations. He is not as concerned with upholding an established legacy as he is exploring his own ideas and feelings.

Still, artists paint what they know, and what Taylor knows is Native imagery. He was raised by his grandparents; his grandfather was Osage and Cherokee. Taylor grew up in a community surrounded by Native people and attended many weekend powwows.

When he got out of the military, he began taking an art class at Tulsa Community College. That did not last long. The teacher of the class, who happened to be the head of the school’s art department, walked up to him and asked him why he always had to draw Indians. The public wants to see more than that, the teacher insisted.

“I just dropped out of the class,” Taylor said.

Aside from purely Native imagery, Taylor incorporates a lot of Christian and religious symbolism into his work. His goal in including Native images with Christian symbols is to show that the traditions are similar in a lot of ways.

“I try to show that tribal beliefs have just as much weight and that this symbology equates to that symbology,” he said. “That’s the crux of my whole career, basically.”

Taylor currently resides in Claremore, where he paints from his home nearly every day. His hours vary, but he ends up spending a lot of time by himself.

“As an artist, you’re an observer,” he said. “That means at times, you participate, so you really get the emotion of it. But then you have to draw back and observe, and that position is a lonely position.”

Taylor worked hard to get where he is today, but no one is completely a product of his or her own work. At some point, everyone needs a helping hand. Taylor credited friend Susan Leggett and Doris Littrell, former owner of the Oklahoma Indian Art Gallery.

Part of Taylor’s inclusion as a distinguished artist is the chance to talk to the university’s art students. There is some irony in the privilege, as Taylor never graduated from college. Still, he hopes to impress upon those students a sense of what it is like to work as a professional artist. He also hopes he can help them find their creative purpose.

It is Taylor’s hope that through this process, he can help a student as others have helped him.

“Regardless, this [exhibit] is an honor for me,” he said. “That’s all I know to say about it.”