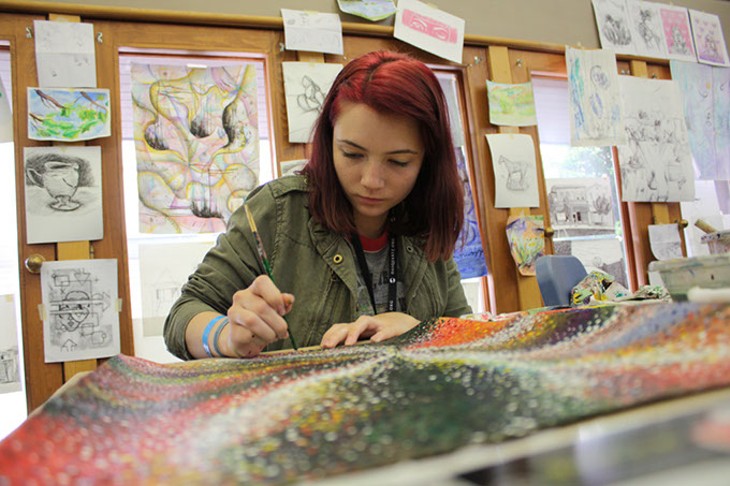 Preceding the evening’s performance of Czech composer Bed?ich Smetana’s “The Moldau,” a symphonic poem from Má vlast, conductor Timothy Long asked the musicians who had not played in an orchestra before to stand.

Connor McCain was one of a handful of youth musicians who stood. In August, McCain begins his senior year at Moore Public Schools’ Westmoore High School. The bass trombone player is one of 100 Oklahoma high school students selected to train and perform in Oklahoma Summer Arts Institute’s (OSAI) orchestra this year.

McCain learned about auditions for the institute, an intensive, two-week residential June academy for earnest and dedicated high school artists, through a flier at a regional band competition. Youth ages 14 to 18 train under renowned artists from across the United States. Eager to improve his abilities and pursue music professionally, McCain auditioned.

Since he arrived June 11, McCain’s music stand held music he never imagined playing as a high school player. His sheet music included three excerpts he was familiar with from a low brass section album by Chicago Symphony Orchestra.

“It’s their job to make you better,” McCain said of OSAI faculty, including Long.

More than 30 years ago, Long attended OSAI as a youth from Holdenville, a Hughes County town of about 5,000 people. Now, he resides in Brooklyn, New York, and has worked as a musician at The Juilliard School, New York City Opera and Boston Lyric Opera.

“At school, for example, it is a teacher’s job to run a classroom and get you to pass the class. It’s less personal,” McCain said. “Here, when we finish up rehearsal, a bunch of us crowd around [Long]. He will sit and talk to us as we ask questions. One of the things he told us, which I think about a lot, living in Oklahoma, we sometimes underestimate ourselves. [Long] told us that really we are as talented as everyone else.”

Like McCain, Long’s first time playing in an orchestra was in 1983 as a violin player at OSAI. An audience of 800 people inside Robert M. Kerr Performing Arts Center on June 18 heard Long relate his own OSAI experience. He arrived at Lone Wolf’s Quartz Mountain Resort for OSAI knowing one other teen who enjoyed classical music. After the first day, he knew he had found a home at Oklahoma’s School of the Arts.

The poet credits the program, now in its 40th year, for instilling in him an appreciation of fine arts and a providing a launching pad for his career.

“Being an artistically inclined kid from small-town Oklahoma, the best part of OSAI was being around other artistically inclined students,” said Myers, who was raised in Chandler. “I grew up in a world dedicated to high school football and little else. It was a new world for me to discover there were many other young people in Oklahoma interested in writing and other arts.”

During his third year as governor, David Boren, now University of Oklahoma president, listened as arts leaders advocated for an Oklahoma School for the Arts, a program designed to educate and enhance the skills of the state’s artistically gifted youth.

Boren endorsed the idea, and with a few days remaining in June — the end of the state’s fiscal year — he transferred about $5,000 of unused funds from the disaster fund to the newly established Oklahoma Arts Institute, to be led by Mary Frates.

“We were excited about that first pilot program because it proved that we had fabulously talented young people in Oklahoma and there were artists who were willing to come to Oklahoma,” Frates said during the June 18 Oklahoma Arts Institute 40th anniversary dinner.

Boren and Joy Hofmeister, state superintendent of public instruction, joined her as the event’s speakers.

The talented youth and the interest of prominent artists propelled the institute onto a prosperous path. In year two, it relocated to Quartz Mountain Resort, situated on Lake Altus in western Oklahoma. Over time, the program increased student and faculty participation as well as length of stay and support. Today, Oklahoma Arts Institute is funded through a unique public/private partnership. Funding comes from Oklahoma Arts Council, Oklahoma State Department of Education and Oklahoma Tourism and Recreation Department as well as private donations.

For Oklahoma Arts Institute visionaries, much of what happens at Quartz Mountain was the intent when the camp launched four decades ago. Students appreciate the the diverse talent that surrounds them in a natural setting.

“I think one of the unique features about this experience is you don’t just come to study music, dance or photography,” Boren said. “Yes, you come to specialize in the field you are most drawn to, but you are with others from other arts disciplines. You realize there are so many creative ways in which to express the same constant and to do it with the same spirit of creativity.”

In mid June, the Oklahoma State Board of Education approved $38.3 million in mandated cuts to the public school activities fund. Oklahoma Arts Institute was one of 13 line items to be reduced. Beginning July 1, the organization will receive $100,000 in funding compared to $349,573 appropriated the year before.

With free time between dinner and practice before the June 18 performance, Connor and fellow students gathered at a wooden table outside the lodge.

The institute offers what is absent at Connor, Taylor Dawkins and Tristan Van Allen’s schools. For one, students surround them with a shared passion for their fine arts discipline.

Evening performances allow students to see the work of their peers.

The trio explained that the faculty treats the high schoolers as colleagues. Student and faculty interactions closely resemble mentor relationships rather than teacher-student relationships. Additionally, the faculty encourages youths’ passions.

“The faculty talk about their past and how they were just like us,” said Dawkins, a senior at Putnam City North High School and a double bass player. “If they are that successful, I can be that successful too.”