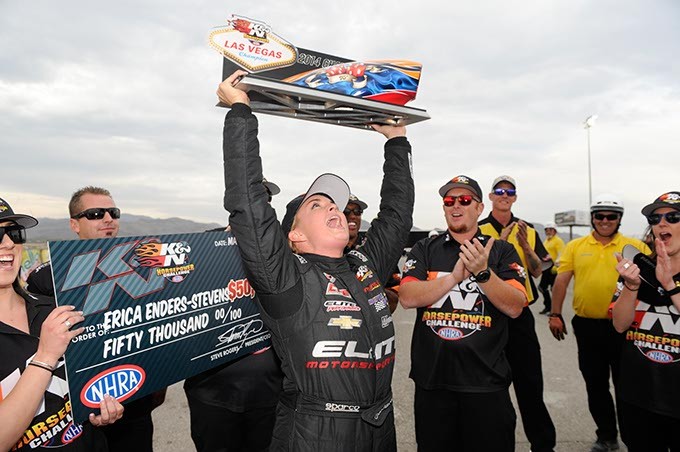 Professional drag racer Erica Enders-Stevens was back in Wynnewood recently, preparing for next year.

Enders-Stevens began drag racing in the NHRA Jr. Drag Racing League when she was 8. She and younger sister Courtney Enders watched their father race in the amateur Sportsman class.

“My sister and I grew up at the racetrack,” Enders-Stevens said. “It was never something that was forced on us.”

Ender-Stevens won 37 junior races in her first eight years. The sisters’ story was turned into a wildly popular Disney Channel movie, Right On Track, which debuted in 2003.

“Now, over 50 percent of the junior drag racers are female. So that’s really cool, because when I started in 1992, I was the only one,” she said.

Ender-Stevens raced Pro Stock for several teams and dabbled in team ownership after turning pro in 2005, running partial schedules at times and struggling to find sponsors. She performed well, however, notching three top-10 season finishes. She became the first woman ever to win a national Pro Stock event when she won in Chicago in 2012.

After the 2013 season, she signed a deal to drive Elite Motorsports’ new Camaro, with father/son duo Rick and Rickie Jones as crew chiefs and in-house engines built by veterans Nick Ferri and Jake Hairston.

“It was like the pieces of the puzzle were coming together,” Freeman said.

Enders-Stevens won six times in 2014, setting two new national Pro Stock speed records and winning the pole six times. She won the K&N Horsepower Challenge in Las Vegas in March after being voted into the competition through a fan vote. The team also picked up sponsorships, including Purple Royal and Oklahoma City-based United Mechanical, Inc.

Enders-Stevens lost the points lead late in the season after missing two events due to budget constraints, but she won the season’s next-to-last event in Las Vegas, setting up a showdown between her and rival driver Jason Line in the Auto Club NHRA Finals.

Enders-Stevens reached the finals on Nov. 16 after winning a semi-final against Jonathan Gray in which both drivers had perfect starting reaction times. That set up a winner-take-all final against Line, who red-lit at the starting line, giving Enders-Stevens the championship.

She joined drag racing pioneers Shirley Muldowney and Angelle Sampey in becoming only the third woman in history to win an NHRA world championship.

“It’s a very awesome accomplishment,” Enders-Stevens said. “But, as any girl racer will tell you, they just want to be the best racer. They don’t want to be looked at as anything different. You put your helmet on and everything’s equal. The car doesn’t know the gender.”

Now, young girls bring their fathers to the races. Enders-Stevens advises aspiring dragsters to join the Jr. Drag Racing League, drive as much as they can and work on the marketing side early.