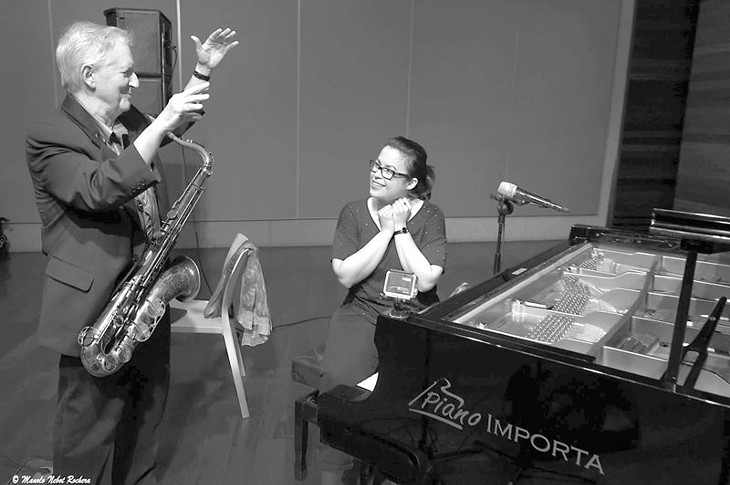 When it comes to collaborative live albums, it is usually assumed the involved performers have spent days — if not months or years — working together and learning each other’s styles in order to ensure a cohesive project. Sometimes, however, creative cohesion can come as instantly as a handshake.

Norman-born jazz pianist and vocalist Champian Fulton had been a fan of saxophonist and tenor Scott Hamilton (no relation to the American figure skater) before they did the live recording of their new album The Things We Did Last Summer, released July 14, while on tour together in Spain. Despite an eight-song project that sounds natural and effortlessly smooth with moments of inspired improvisation, the two musicians first met only hours before the concert in which the album was recorded.

“We met, we had lunch, we talked and then we went and we made the record,” Fulton said in a recent interview with Oklahoma Gazette.

At the beginning of the year, Fulton’s agent had contacted her about possibly going on tour with Hamilton, a longtime jazz performer who toured with legendary bandleader Benny Goodman in the 1970s and was a studio musician for singer and actress Rosemary Clooney. Fulton, an admirer and fan of Hamilton’s work, was immediately excited about the possibility. Her excitement increased after plans to record a collaborative album on the tour began developing.

The Things We Did Last Summer was recorded in April during a concert in the small Spanish city Benicàssim, which is near Valencia. Its tracklist is filled with Fulton and Hamilton’s favorite jazz and pop standards, but Fulton said a few tunes were products of the moment and not anything the pair had discussed performing beforehand.

One of the record’s standouts is “The Very Thought of You,” the album’s last track. Fulton, whose vocals are often compared to bluesy contraltos Billie Holliday and Sarah Vaughn, said she grew up listening to Joe Williams’ 1959 version.

“It was always moving to me,” she said. “I felt a connection to that song, and I played it all the time. It’s sort of odd that I hadn’t recorded it before.”

Another highlight is the instrumental title song, a tune that Fulton said she regularly played with her own band that Hamilton also enjoyed but had never recorded before.

“The live recording you hear is actually the very first time we played it,” she said. ‘We all agreed that it just came out so well. It also makes a nice title for the record because it’s sort of wistful and nostalgic.”

Fulton and Hamilton had to record their album during the first concert of their short Spanish tour for scheduling reasons. Though live albums are often recorded toward the end of a tour, when the musicians are in a firm rhythm, Fulton said she was unrattled about the prospect of recording a project within hours of meeting Hamilton.

“Just from hearing Scott’s music I knew that we would get along,” she said. “When we met, he was just so easygoing and we were friends immediately.”

Fulton traveled to meet Hamilton in Spain from New York, where she has lived for the last 14 years. Hamilton, a native of Rhode Island, now resides in Italy. Fulton usually makes three or four performance trips to Europe each year. She loves the warm Spanish people and the country’s diverse landscape.

“I’ve visited this area [near Benicàssim] in Spain quite a lot,” she said, “so I have some really nice friends and fans there in the area.”

The theater in which the live album was recorded seats around 200 people. Fulton said the intimate show featured a friendly crowd familiar with the performers’ work.

“It was full and full of people who already knew my music and already knew Scott’s music,” she said. “They were already excited to be there and it gave a really nice energy.”

Fulton’s last concert in Oklahoma was in April 2016 at Oklahoma City Community College’s Visual and Performing Arts Center. She spent a few days in the area, holding a few clinics for music students and attending the University of Oklahoma’s spring football game.

Fulton lives in New York, but she has never left behind her past with the state or her family. Her father, Stephen Fulton, still plays trumpet and flugelhorn in Fulton’s live band. Her grandmother (Stephen’s mother) was also a great piano player.

Music was an inescapable part of growing up as a Fulton.

“There was always music in the house, and the music was something fun,” the pianist said. “My dad and his friends were having fun playing and listening to music, and I wanted to have fun. It became such a hang. You play music, and then you make friends with the musicians.”

Fulton spent her high school days regularly performing downtown in venues like Mickey Mantle’s Steakhouse and the former Maker’s Cigar Lounge. She went to college at the State University of New York at Purchase but would continue her regular local performances when she came home for the summer.

She said Oklahomans have not only a great appetite for jazz, but for many kinds of music.

“I really think Oklahomans love live music, and they’re very eclectic, I think, in their tastes,” she said. “They love jazz; they love country; they love rock. I think they really just appreciate the aspect of a live band.”

Fulton said she knew for a long time that she would eventually move to New York, but not because she was trying to leave her home state behind.

“Being a jazz musician, there are so many opportunities here in New York,” she said. “I wanted to come here to play and to be a member of the jazz community, which is sort of centralized in the New York area.”

She said she always carries Oklahoma as a part of her, no matter where in the world she is staying.

“It’s a very special community there, especially in central Oklahoma,” she said. “I definitely miss that feeling of belonging to it.”

Fulton currently has no concerts scheduled in the state, though she plans on returning sometime in the spring. She is scheduled to release a new Christmas album in November.