Oklahoma cities score poorly for LGBT equality in a new study, but Freedom Oklahoma believes gains, even small, are coming 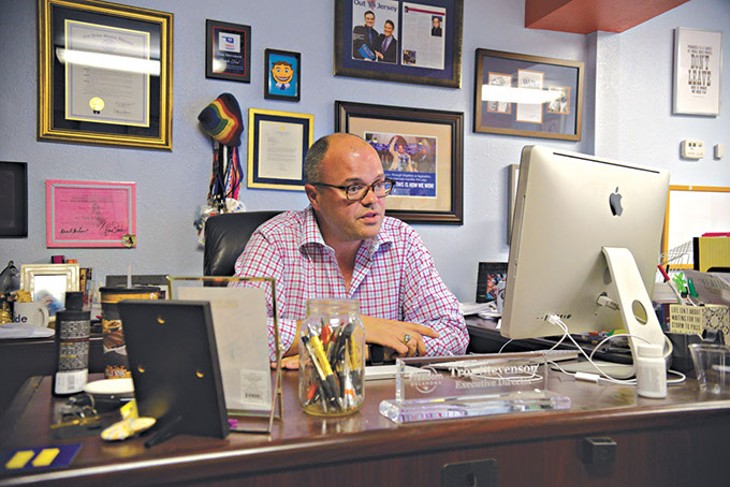 The inclusion of sexual orientation among the classes protected was added to the statement over the last year.  By including sexual orientation as a protected class, Edmond is stating its commitment to protecting lesbian, gay and bisexual people in its workforce. The change garnered little public attention, except among those who knew to look for it, explained Freedom Oklahoma’s Troy Stevenson.

“It didn’t take much,” said Stevenson, the executive director of a statewide political advocacy organization that advocates for lesbian, gay, bisexual and transgender rights. “It wasn’t even a change with how they treated their employees. It was a change in what was written down in their policy. They were already doing the right thing, but it wasn’t in writing.”

By municipal leaders expanding their commitment to treating employees equally, Edmond’s score on the Human Rights Campaign’s 2017 Municipal Equality Index rose to 20. Since 2013, the civil rights organization has examined the laws, policies and services of municipalities and rates them on the basis of their inclusivity of LGBT people who live and work there.

In 2016, the first year HRC included Edmond in its index, northern Oklahoma County city scored a 14. A perfect score is 100. So far, no Oklahoma cities have attained the coveted top score. Top scores send clear messages to LGBT communities and their supporters about which cities stand firm on the ideals of inclusion, acceptance and opportunity.

How cities reach a top score does not involve extreme change. According to Stevenson, it can be as simple as a municipality updating internal policies to ensure nondiscrimination in employment.

Last week, HRC — in partnership with the Equality Federation Institute — issued the 2017 Municipal Equality Index report examining 506 of America’s cities, including eight in Oklahoma. The index rates cities based on 22 criteria falling under five categories, which are nondiscrimination laws, a municipality’s employment and contracting policies, inclusiveness of city services, law enforcement and municipal leadership on matters of equality.

Oklahoma City scored 41 out of 100 points in the index, while the average score for cities in Oklahoma is 20, which falls below the national average of 57. Norman scored 42 points, Tulsa scored 34, Edmond scored 20 points, Lawton scored 17 points and Broken Arrow scored 12 points. Both Moore and Stillwater failed to earn any points. Of the 506 American cities scored, 11 earned scores of zero.

Sixty-eight cities, including nearby Dallas, Fort Worth, Denver, St. Louis and Kansas City, Missouri, scored 100 percent on the index.

As a member of the national Equality Federation, Freedom Oklahoma assisted in the data collection for the report. Despite Oklahoma cities scoring in the bottom tier, Stevenson argued Sooner cities have made progress toward LGBT equality in recent years. Further, he contends that scores should be higher for Tulsa and Norman.

Tulsa failed to receive 12 points for reporting hate crime statistics from the Federal Bureau of Investigation. In late 2015, Norman City Council extended the city’s civil rights protections to include LGBT residents. The city’s resolution, which updated Norman’s discrimination policy from 1986, was not counted in the nondiscrimination category.

“We’ve done a lot of work in Norman in the last few years,” Stevenson said. “The index has very strict guidelines on nondiscrimination laws. Norman’s resolution didn’t meet those criteria. We disputed, and we plan to talk about it next year to make sure the resolution is counted and their score is changed.”

In Oklahoma’s third most populous city, the motto is “Building an Inclusive Community.” The message, which is prominently displayed on Norman’s city government website and other municipal branding opportunities, is a charge city leaders take seriously, explained Councilwoman Breea Clark.

In addition to tackling issues around LGBT discrimination, the council adopted a resolution recognizing Indigenous Peoples’ Day, which replaced Christopher Columbus Day. This past spring, Clark initiated the community discussion about renaming DeBarr Avenue, which was named after a one-time vice president of the University of Oklahoma Edwin DeBarr. The university official from the 1920s was a high-ranking member of the KKK.

“We are really modeling what Oklahoma cities can look like,” Clark said. “I am hoping to share the benefits of being an inclusive community. It’s not just about the quality of life. It’s about making all people feel that their community is their home and where they belong.”

Norman’s motto and its nondiscrimination resolution send a message to not only its current community members but prospective community members, Clark said. Without such policies, a city could hemorrhage quality professionals or dissuade others from locating there, which can ultimately impact a city’s economy, culture, education and quality of life.

“The generation that is coming has an expectation of inclusivity,” Clark said. “If you want them to live in your community, they need to feel they are a piece of it, that they belong.”

Cities have an incredible power to effect change with municipal protections, especially because there are no statewide LGBT nondiscrimination protections. Mayors and other elected leaders can be at the forefront of change in their communities, Stevenson said.

Since the HRC began issuing American cities equality scores, cities have taken note of their scores and many municipal and civic leaders have contacted Freedom Oklahoma for help, Stevenson said.

In addition to Norman and Edmond, Freedom Oklahoma has worked with municipal leaders in Oklahoma City, Tulsa and parts of rural Oklahoma, like Ada and Tahlequah. In the coming months, Freedom Oklahoma plans to host town halls in Moore and Stillwater to bring awareness to the community about lack of protections.