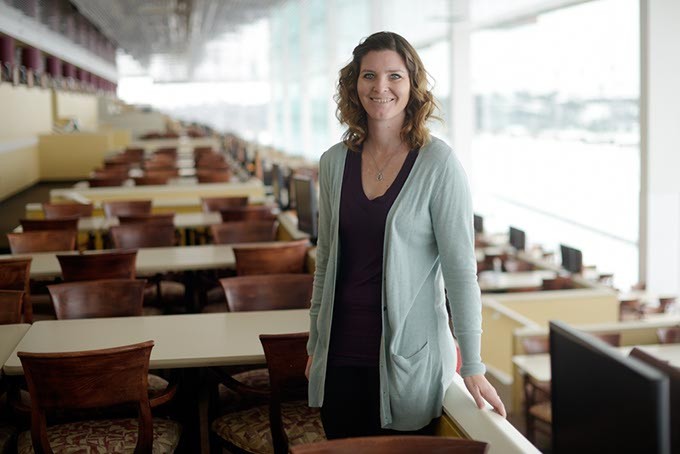 The field of American Quarter Horses is turning for home and heading down the stretch as the crowd’s roar swells from Remington Park Racing & Casino. The traveling sound catches the attention of softball fans located just south of the racetrack in the ASA (American Softball Association) Hall of Fame complex.

On afternoons when horse racing and softball tournaments collide, Oklahoma City Adventure District’s manager Tiffany Batdorf is asked repetitively about the various attractions in the northeast quadrant of the city. Often, her responses about the lively entertainment and educational offerings in the district generate bewildered replies.

“People will tell me they had no idea there was even horse racing in Oklahoma,” Batdorf said. “Many people know about the zoo or Science Museum Oklahoma, but I don’t think people know all we have in the district.”

What the Adventure District has is what no other district in the area or state can claim. The area is home to five museums, which includes the National Cowboy & Western Heritage Museum, 45th Infantry Museum, Oklahoma State Firefighters Museum, The American Pigeon Museum & Library and Science Museum Oklahoma. Furthermore, the district boasts a golf course, a major movie theater, a special events venue, an amphitheater, a health department, a career and vocational school and neighborhoods such as South Park Estates and Wildewood.

First coined by marketing professionals in 2000, the Adventure District appears to have all the key ingredients for further economic growth: infrastructure, location and people. Annually, 4 million visitors funnel through the major attractions, the district reports.

Stakeholders and residents have witnessed slow growth in regard to retail, restaurants and hotels, explained Oklahoma City Ward 7 Councilman John Pettis Jr., who represents the area.

With construction of an $80 million racetrack in the late 1980s, city leaders and nearby residents expected the area to witness an economic boom. Before construction began in 1985, Ward 7 Councilman Goree James described the racetrack as “the greatest economic shot in the arm the northeast area has ever had.”

Now, over three decades later, no major hotel brands or restaurant chain has dotted the district’s vacant land, which is not far from the crossroads of interstates 44 and 35.

“It’s one of the strongest areas of the city; just think of the number of people who visit the area,” Pettis told Oklahoma Gazette. “It’s sad to say, but the visitors and residents must go far northwest Oklahoma City, Midwest City or Edmond to eat, to shop or to stay the night. I am hopeful we will be able to change that and bring money back into city limits and into the Adventure District.”

In hopes to spur economic activity, Adventure District leaders pursued a business improvement district (BID), a collaborative initiative in which property owners pool resources for services. Like many endeavors, such districts take time to develop fully and strengthen.

What is a BID?

Other commercial areas of the city, including the SW 29 District (La 29), actively seek BID status.

In a BID, municipalities collect mandatory tax assessments on commercial property owners to cover district costs in areas of marketing and public relations, enhanced maintenance, capitol improvement projects and administration. With a defined boundary, a district manager and a business-merchant association establish a mission and goals to strengthen and uplift the area.

Leaders of the Adventure District were attracted to the BID method for its role in bringing all attractions and businesses together, which Batdorf explained had never been done before.

“We wanted to come together as one unified voice and bring attention to the district,” Batdorf said. “In the past, communication was just limited to the five major attractions. We’ve opened the line of communication.”

For the area deprived of big-box stores and sit-down restaurants, the BID was viewed as an economic development tool to stakeholders.

While the district can’t directly offer economic incentives or tax breaks, the district could proposer through its goals of maintenance and beautification, advocacy and promotion.

Such endeavors are known to lure new businesses eager to become part of a thriving commercial area.

Thirteen months ago, with more than half the commercial property owners in favor, the city council approved the district’s request for BID status. For 10 years, tax dollars from property owners (including the city-owned zoo and racetrack) will be pooled together for a $200,000 annual budget.

The district’s first task was putting up a new website listing all the area’s attractions and established businesses. Debuting in April, the website replaced an aging nine-year-old site without mobile capabilities. In the first eight months, more than 4 million impressions were captured on the website. A district brochure and an initial beautification project for a median along Martin Luther King Avenue marking OKC’s Adventure District were other priorities.

The Adventure District has caught the intrigue of developers and franchisees over the last year, contend both Pettis and Batdorf.

Questions and concerns posed by developers hint the area must overcome misconceptions, like its major attractions operate seasonally.

Entities like the zoo, racetrack and museums offer year-round events and exhibits bringing people to the area all 12 months of the year, Batdorf said.

Efforts are underway to break down attendance numbers at the museums and other entities by quarters, which would prove visitors come year-round.

BID status earned the attention of the Greater Oklahoma City Chamber, which listed the district in economic development materials.

Pettis joined chamber officials at a Las Vegas retail conference where he personally introduced franchisees, including those with interest in entertainment districts, to the Adventure District.

“No one seems to want to be the first,” Pettis said.

The first-term council member explained developers often ask why development has been stalled over the past three decades.

“For them, that’s a red flag,” he said, “but to us, no one has taken the opportunity. We are still waiting to see who will be the first.”

Small signs of progress eventually make a big difference — Batdorf and Pettis are counting on it.

On cold and dreary winter days, Batdorf notices swarming parking lots at Science Museum Oklahoma and the movie theater. Holiday parties at Remington Park stretched from the second weekend in November into New Year’s Eve. In the event of an unseasonably warm winter day, families walk the zoo grounds and golfers take their swings on the course.

“We have the kids, we have the moms, we have adults and we have seniors,” Batdorf said. “We have a little bit of everything out here. … We just need that one developer to come out here, see the potential.”