Preparing costumes for a theater performance or ballet production takes time and planning, but the art of costume design and directing is not one that ends when the curtains rise. In a lot of cases, in fact, the work is just beginning.

Dayna Brown has been the costume director for Oklahoma City Ballet for the last three years, contracted to work for the company 33 weeks out of the year. Outside OKC Ballet, she also does costume work for groups like Oklahoma Children’s Theatre and Lyric Theatre of Oklahoma. Brown runs Costumed, a business based out of her home that rents out costumes to people and throws photo-centric theme parties for children.

During any given OKC Ballet production, one is sure to find Brown somewhere behind the stage and out of view, waiting as a lifeline for those in need.

“Anytime there’s a ballet performance,” she said, “I have to be backstage the entire time in case something breaks, which does happen.”

Brown recalls a production of Romeo and Juliet, when a dancer playing the character Paris had a zipper down his back begin to split. It was just moments before the character was scheduled to die with his back to the audience.

“He has like two seconds,” Brown recalled. “He runs out and he’s like, ‘Something’s breaking!’ I’m just standing in the wings, and I have to sew them up real quick.”

She remembers other emergency instances, like when a dancer’s skirt was stepped on and torn during a matinee performance. Brown had to work quickly to repair the skirt before the next scheduled show later that night.

OKC Ballet rents costumes for most of its productions. It is far more cost- and time-efficient than designing a new set of pieces for each ballet the company produces.

Still, there are some shows that involve designing original pieces. Whether a production is rented or original has a huge effect on the way Brown approaches her job.

For rented shows, Brown begins her work about three weeks before the premiere. The first thing she does is unpack all the delivered costumes and compare their inventory list with what has arrived. She takes time to get familiar with every detail of the outfits.

A big difference between ballet and general theater productions is that in theater, one typically has a good deal of artistic license. Often in ballet, everything must be replicated to a T, down to the correct shade of lipstick or whether a shoe can have straps of not. It’s Brown’s job to make sure everything is accurate.

After she finishes her initial prep work, it is time to begin fittings. Brown has to work around rehearsals and dancers’ personal schedules.

On the other hand, if a show is a complete original production, Brown’s first step is meeting with the choreographer and working with him or her to understand their vision for the show. She might listen to the score or ask the choreographer if there are any colors they want to see.

“One choreographer just gave me a picture of the ocean,” she said. “He was like, ‘I want this, and here’s the songs.’ That was a challenge, but it was cool because it was really open and he was really open. After the show, I got a lot of compliments.”

Often, Brown is designing costumes before a production’s choreography is even finished. In addition to looks, she also has to account for dancer movement in her designs.

Designing original costumes can be fun and challenging, but it can also be nerve-racking. And Brown said a lot of the costumes OKC Ballet rents for its shows are very beautiful and a thrill to work with. The costumes rented for a recent production of Swan Lake were the same ones used in Taylor Swift’s “Shake It Off” music video, for instance.

“They were so gorgeous and so well put together,” Brown said. “Every detail of every costume was so amazing.”

Some of the costumes OKC Ballet uses can be washed by an outside cleaning service, but what a lot of people do not know is that Brown has to handwash many of the more delicate pieces.

“I don’t wash the skirt part,” she explained while holding a Snowflake tutu used in The Nutcracker. “I just sit it in the sink and I wash the bodice.”

Brown said her workload is only manageable through a lot of advance work and preparation.

“It’s a lot of organization,” she said. “It’s almost like event planning because you have so many details and everything.” 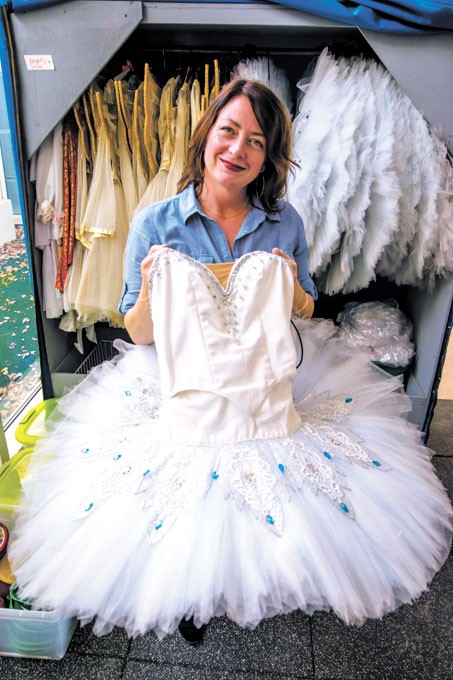 Outsiders will often tell Brown how fun they think her job must be. They are not wrong with their enthusiasm, but even the most colorful and elaborate jobs are still jobs.

“It’s really fun, but the deadlines are killer,” she said. “People have to have their clothes. It doesn’t make any difference if it’s a Saturday or something. It has to get done.”

Still, with each fitting session she runs, Brown is reminded why she loves her job.

From the tiniest child dancers to the company’s most seasoned vets, everyone wants to see their costume. Often, dancers come into fittings after a long day of rehearsals and stern instruction from directors. For them, fittings are a welcome break.

Brown said the main reason she works in costuming is to be an integral part of what goes on stage. To her, it feels like magic.

“A performance space is sacred,” she said. “Audience members can be forever changed within a few hours experiencing a live performance. Nothing else compares.”