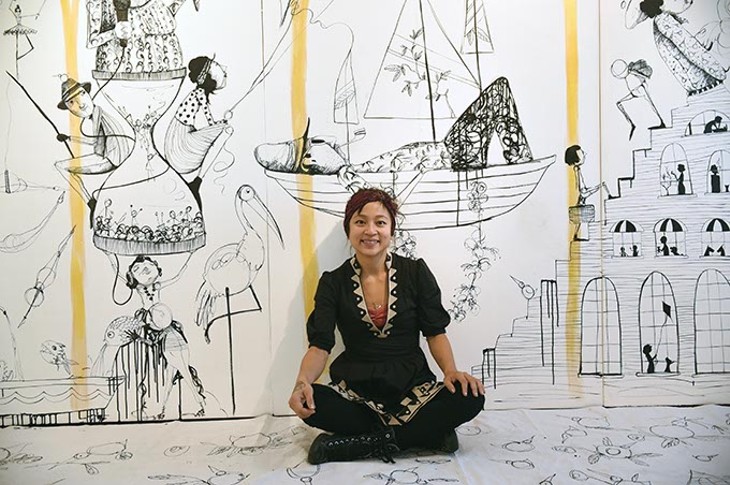 “What do you want to be when you grow up?” her parents would ask.

“An artist,” Duong would reply.

Maybe the question never changed because her parents never liked the answer. Art might be suitable as a hobby, they would say; but for a career, you could find something with a lot less risk.

Duong, however, has never been about the safe choice or routines. This is a woman who spent this summer rafting the Nile, one who decided to move away from Hawaii because it was not “environmentally stimulating” enough.

The Oklahoma City-born artist’s most recent exhibition, Flux, at JRB Art at the Elms in December highlighted the artistic and personal growth experienced by Duong on some of her recent travels.

She has a serious case of wanderlust. She claims to have made stops in more than 50 different locales since April. In 2016, she plans on being overseas for more than half the year, including going to Hong Kong and India to collaborate with a jeweler friend and for one of her exhibits at a gallery in Korea.

“As long as my dog is with me, I can just be gone forever,” Duong said.

Her expressive art style did not fully develop until she was in college at the Art Institute of Chicago. It wasn’t so much the school itself that informed her style; she said there was not much a professor could do to “change” anything about the way she draws.

Instead, she said she found herself caught up in the unique urban sprawl that makes up the city. She remembers sitting, waiting for the train, sketching the world as it looked from her eyes.

“I feel like the things I create in Chicago are kind of different from everything else,” she said.

Above all else, Duong said her drawings are mostly just an interpretation of her environment, meaning there’s always a need to go out into the world just so things can happen.

The drawings in her Flux exhibit depict memory after travel memory. She remembers house-sitting across the western United States earlier this year with her friend from India.

“We were just living out of our suitcases, hauling my dog and my cat around. It was pretty fun,” she said.

Later this summer, she met another friend in Uganda who was finishing her master’s degree in international agriculture. She was still working during Duong’s first weeks there, so Duong took the opportunity to explore. She said she was one of the last people to raft the Nile in that area before the installation of a hydroelectric dam.

She later went gorilla-tracking that same trip. The group of gorillas they followed had the most babies, though their silverback left them momentarily to go fight the silverback of another tracking group.

Travel was not a sudden awakening that took place this summer. Duong said her first time abroad was a trip to learn Spanish in Costa Rica in the summer right after high school.

Oddly, Costa Rica is what reminds her of the world’s ascent into a new digital age. The Internet, she said, was really just taking its place in mainstream life around the time she was leaving school. She remembers being in Costa Rica, hoping to find pamphlets or something with college options.

“I wasn’t trying to figure out a school to go to yet, and somebody told me to ‘look at the Internet,’” she said. “I was like, ‘The Internet? I didn’t think about that.’”

Her most notable traveling feat is likely the time she hitchhiked across the United States in her early 20s with another friend. Her goal on the adventure was to not spend a dime the entire trip.

“I did it at a young enough age where I didn’t have any fear, so it was like, ‘Whew! Whatever. I’m doing this,’” she said.

Duong, now an experienced hiker, said the trip stands out most in her mind because of how unprepared she was to live in rugged conditions for such a long period of time. She said it definitely encouraged them to rely on the many street-savvy individuals they met along the way who showed them how to survive.

“Now I feel like a pro; I feel like I could write a handbook for living on the streets and not spending any money,” she said.

Duong owes a lot to the world. She has met friends and made life experiences. Perhaps, most of all, the world and its wonders have helped her grow artistically in a way that would have never manifested otherwise.

She has grown emotionally as well as artistically.

“[Travel] opens your views on the world, on people, humanity,” she said. “I think it gives you some humility and just an overall passion for life.”