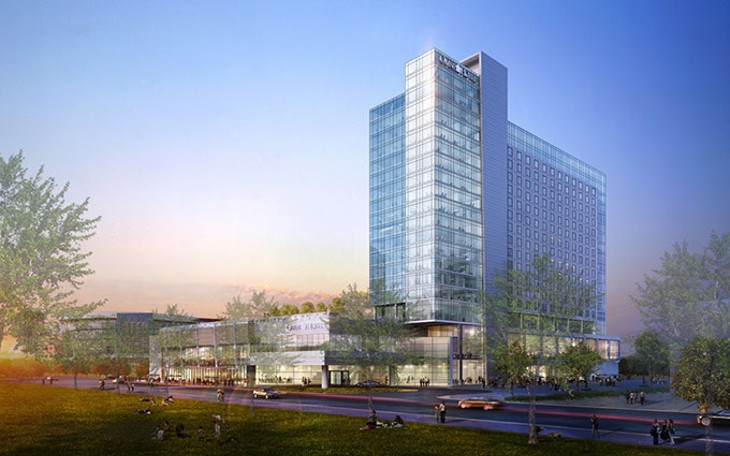 In three years, Oklahoma City will be home to a $288 million, state-of-the-art convention center with more than 275,000 square feet of event space. Adjacent to the venue will be the 70-acre Scissortail Park as the Oklahoma City Streetcar glides by with service to popular downtown destinations, including Midtown, Automobile Alley and Bricktown.

In 2009, Oklahoma City voters backed the third installment of MAPS (Metropolitan Area Projects), MAPS 3, to further transform and improve the city, mostly downtown. In coming months and years, residents and visitors will begin to experience eight quality-of-life projects developed for an estimated $777 million. Some smaller MAPS 3 projects like Riversport Rapids and the fairground’s Bennett Event Center are already complete and operational.

Three years from now, a 600-room, $235.5 million hotel by Omni Hotels & Resorts will rise across the street from the convention center, located within the boundaries of SW Fourth and SW Seventh streets between S. Robinson Avenue and S. Shields Boulevard. Last week, the Oklahoma City Council approved an $85.4 million public financing agreement with the luxury hotel chain, sealing the future of a headquarters convention center hotel.

While it has taken years to get to this point with the convention center — architecture firm Populous delivered 60 percent of the project final plans to the council July 18 — it has also taken just as long to land a convention center hotel. Despite the importance of their coexistence, the two are separate projects.

Discussion about the need for a new convention center to replace aging Cox Convention Center led to hotel talks between city and economic development officials.

The debate is now over. Oklahoma City has officially joined a growing list of cities not only building a convention center, but also handing out millions to ensure the development of a neighboring full-service hotel in efforts to attract convention-goers and spur city tourism revenue.

In addition to improving the quality of life in Oklahoma City, MAPS projects spur private investment, which is evident from the original MAPS projects, like the improvements to the Oklahoma River and the construction of Bricktown Ballpark. A key negotiator in the deal with Omni, Cathy O’Connor, who leads Oklahoma City Urban Renewal Authority, said private investment follows the city’s proposed streetcar system, downtown urban park and convention center.

A 600-room hotel across from the convention center that is connected by a sky bridge will also spur the local economy, O’Connor said.

“This project is designed to create new economic impacts and benefits to Oklahoma City,” O’Connor said as she spoke in favor of a headquarters hotel when addressing the council at its regular July 18 meeting. “It will generate increased tourism to Oklahoma City, which is one of the fastest-growing components of our local economy, it will provide job creation and increased employment opportunities both as the hotel is constructed and as the hotel continues operation. And it will enhance and foster greater utilization of the new convention center, making it much more economically feasible and sound as it goes forward with its operations.”

Those economic benefits come with a tax subsidy. Oklahoma City’s Omni is expected to cost $235.5 million, with 36 percent of that funding provided by a subsidy. To pay off the bonds over a 25-year period, the council plans to sell municipal bonds to cover its share and use 10 different funding sources.

Under conditions in the 45-year agreement, Omni will pay $200,000 a year for 25 years, beginning the fifth year after hotel completion. Omni will make a minimum annual tax payment of $1.4 million for 30 years.

Additionally, Omni is required to pay the Oklahoma City Economic Development Trust 10 percent of its net operating income in excess of $20 million, capped at $15 million.

In the agreement, the city promises to deliver on its commitment to building the convention center, downtown park and streetcar system. Additionally, Omni will be Oklahoma City’s “convention center hotel.”

The city must move forward with the build and operation of a parking garage to serve Omni and convention center guests. Under a parking easement agreement, Omni will have access to 450 parking spaces, which access at the market rate.

Oklahoma City Council has estimated the parking garage building cost will be $37 million, and it has been suggested to use some funds from the MAPS 3 contingency fund to complete it. The council has not reached any final decision on a funding plan for the garage.

Cox Convention Center, which is currently the city’s main convention center, may not be used as the main convention center one year after Omni opens. The agreement restricts redevelopment as a hotel. Omni would be offered first rights to develop a hotel on the site. Additionally, the agreement creates a “no-subsidy zone” that would restrict the city from offering subsidies for any future hotel development. First National Center, which is beginning renovations to make way for a hotel, apartments and retail/dining, was excluded from the zone.