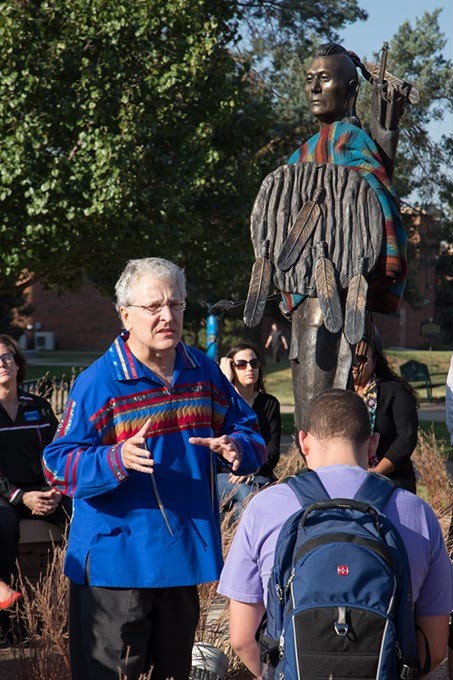 When it comes to explorer Christopher Columbus, many recall learning the ubiquitous rhyme “In 1492, Columbus sailed the ocean blue.”

Countless American grade-schoolers memorized the line on or around the second Monday of October, known as the federally recognized holiday Columbus Day.

Oklahoma City resident Sarah Adams-Cornell remembers those lessons. A member of the Choctaw tribe, she asserts the holiday overlooks the painful history of Native Americans and is often celebrated under misperceptions.

The implications of Columbus’ New World discovery are more complicated and serious than a grade-schooler can fathom. The Italian sailor was not the first to discover the New World, and he never set foot in North America. History shows that his ships reached various Bahamian islands and met with Lucayan-Arawak Indians, which were later terrorized by Columbus and his crew.

For years, Adams-Cornell observed American cities that were renaming the second Monday in October Indigenous Peoples Day and shifting recognition from the conqueror to the people he encountered and their descendants. In 1992, Berkeley, California, was the first city to proclaim Indigenous Peoples Day. Last year, Seattle and Minneapolis became the first major cities to recognize Indigenous Peoples Day. This month, Denver; Portland, Oregon; St. Paul, Minnesota; and Albuquerque, New Mexico, joined the list.

In September, City of Anadarko leaders approved an Indigenous Peoples Day proposition and became the first Oklahoma municipality to make the switch. Presidents at the University of Oklahoma (OU), Oklahoma City University and Southeastern Oklahoma State University followed suit, which led to on-campus cultural ceremonies and celebrations of the decisions.

Adams-Cornell believed Oklahoma City would be next. She rallied friends from fellow tribes and created the grassroots group Indigenous Peoples’ Day OKC. After presenting its call during the public comment portion of the Sept. 15 Oklahoma City Council meeting, a resolution was drafted following support from Councilman Ed Shadid.

“It is something we wanted to change for a long time but never felt like we had an opportunity,” said Adams-Cornell, activist-in-residence for the Center for Social Justice, an initiative of the Women’s and Gender Studies Program at OU. “As native people, we don’t have a large seat at the table. We are underrepresented at every level of government, local included. We’ve never seen that opportunity arise to have some success. This year was different.”

The resolution was presented to the council Sept. 29. After dozens of community members — many of whom identified themselves as Native Americans — spoke in support, the measure failed in a 4-4 tie vote with Councilwoman Meg Salyer absent.

The same resolution came before the council at the Oct. 13 meeting. Under the council chamber’s chandeliers adorned with metal Native American chief busts, more than 20 people reiterated their call for Indigenous Peoples Day to all nine council members.

The public requests, along with letters from residents and tribal leaders, weren’t enough to sway the council. The resolution failed in a 4-5 vote. Council members James Greiner, Larry McAtee, Salyer, Mark Stonecipher and Mayor Mick Cornett casted “no” votes without explanation in open session.

The final vote elicited a shout from the chamber gallery: “We’ll be back.”

“One of the things made very clear is the insult that the indigenous people feel about this date being named in honor of Columbus,” said White, who requested the Oct. 13 re-vote. “This is an effort to bring history back in line with what really happened.”

Shadid agreed. Before voting, he urged fellow council members to join him in support and said the federal government made a mistake in 1937 when it created the holiday.

The City of Oklahoma City does not observe Columbus Day. Unlike federal workers, city staffers work the second Monday in October. Additionally, there are no public celebrations or ceremonies held in Columbus’ honor. The mayor said he believes altering the holiday is the role of the federal government.

That plan is in the works, but native leaders also see value in first presenting legislation at the local level.

“I think it is important that our national leaders see what is happening in our cities, and then they will see the need for it to happen on a federal level,” Adams-Cornell said. “Our local governments ... can pass resolutions or proclamations. They have the power, and we are ready for them to exercise it.”

Indigenous Peoples’ Day OKC will present its request to OKC leaders again, as Shadid asked for the resolution to be added to an agenda in 2016. Adams-Cornell said the group is reassembling and encouraging natives to register to vote and become involved in local government.

“This is a unifying issue for the Native American community,” Adams-Cornell said. “Though we are sovereign nations … this is an issue that brings us all together.”

Various tribes were represented in the council chambers during the past three meetings. Some even came from outside of Oklahoma City. Jasha Lyons Echo-Hawk is a Pawnee resident whose heritage is Pawnee and Seminole. She was ready to see progress in Oklahoma’s largest city.

The experience prompted her to work with the Pawnee Nation of Oklahoma to promote Indigenous Peoples Day in Pawnee, a city in northeastern Oklahoma.

“It matters to us, and it matters to more than just indigenous people,” said Lyons Echo-Hawk. “It is about truth-telling, and it is about integrity … I think it will speak volumes when Oklahoma City adopts this resolution. It is a matter of time.”