The bar at The R&J Lounge and Supper Club, 320 NW 10th St., gets noisy. Booths are filled, the patio bustles and voices rise over music.

In the back, past the bathrooms and up a small set of stairs, is a door to a quiet, intimate room. Once a week, dinner there is prepared by chef Brad Ackerman.

R&J Dinner For Twelve joins a bevy of one-time and ongoing multi-course dinners across Oklahoma City that cater to diners’ growing appetite for out-of-the-ordinary meals.

One of the city’s long-loved fine dining spots is The Metro Wine Bar & Bistro, 6418 N. Western Ave., and it has hosted special dinners almost since it opened.

“We started doing wine dinners about 26 years ago,” said owner Chris Lower. “I have seen a lot more of those spring up lately.”

While there’s nothing wrong with a wine distributor rep planning a paired dinner, Lower said The Metro only holds them when the winemaker or winery owner is in town. The experience is about inviting people to hear a personal story from someone who has a connection to the wine. Over the years, the restaurant built a fairly large mailing list to alert guests about upcoming events.

“We have some people who come to almost every winemaker dinner we do,” Lower said.

“It has to be outside of the regular restaurant experience,” he said. “It’s not just good food and good service. There has to be a wow factor.”

That can be a special space or special guests, like when Stranger teamed up with dozens of local chefs and celebrity restaurateurs Danny Bowien and Rick Bayless for OK Chefs Relief in May 2013 to raise money for victims of the Moore tornadoes.

To do something extraordinary in his home base at Ludivine, 805 N. Hudson Ave., Stranger turns to exotic ingredients and meals outside the norm, as he has with his Head-To-Tail dinner series, where guests paid a premium to dine on Oklahoma-raised black wagyu beef dishes, grass-fed Oklahoma lamb and wild yellowfin tuna from Montauk, New York.

“For one thing, it’s on a Monday night, when the restaurant is usually closed,” he said. “And I really push myself to serve something we wouldn’t serve every night.”

The tuna only has four muscle groups, so he cooked using the spine, the collar and the eyes to create memorable dishes.

“You don’t really make money on all the extreme stuff,” Stranger said. “It’s about doing it because you want to.”

He said his next special dinner has almost no lead time.

“I’m working on something that’s a surprise. No one will know about it until an hour before it starts,” he said. “This one I’m doing, it’s going to be incredible. I just want to be a part of people dining this way.” 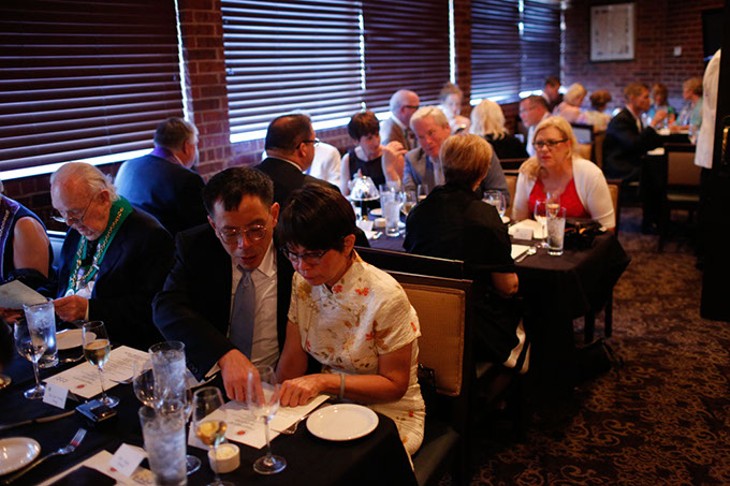 Dinners vary in scope and price, but for restaurateurs, Lower said, the best part of set menus is certainty.

“The economics of it, you can dial those in,” he said. “You know what you’re paying for the food, and you know exactly what the wine costs.”

Unlike most evenings, he knows just what customers are going to have because they’re all having the same thing, he said. It’s almost like a catering job, except chefs have the luxury of cooking in their home kitchen and serving the food fresh.

The Metro usually holds special dinners on Sunday nights — typically a slower night for the restaurant — meaning a bump in sales.

It’s also a chance for chefs to raise their culinary bar.

Several times a year, members of Confrérie de la Chaîne des Rôtisseurs get together and ask some of Oklahoma City’s best chefs to push the boundaries of cuisine in the metro.

Chaîne meals range from about $50 for the Dining Around series to upwards of $150 for full-fledged dinners with wine pairings. Each time, the local chapter of the international dining club explores the skills and imagination of the chef.

Though the menu at The Red Cup, 3122 N. Classen Blvd., is filled with Frito chili pie and sandwiches during the day, once a month, chef Patrick Clark expresses gourmet flair with The Red Cup Supper Club. His focus isn’t just on skill; it’s on giving diners a better understanding of the ingredients.

“After speaking with [iconic local chef] John Bennett about the dinners when they first started,” Clark said, “we both agreed that I should focus on the individual ingredients, highlighting them in their prime rather than pairing them with other things causing the palate to overlook how amazing a fresh ingredient is.”

Stranger said that’s the job of a special dinner.

“You have to take people out of the norm and out of their comfort zone,” he said. “It’s difficult to do well.”

The key, Stranger said, is to try to understand it from the guest’s experience. If diners don’t think there is anything special about the meal, they’re also unlikely to come back when it isn’t a special event.

For those tired of hearing about great dinners after they happen, check out restaurants’ websites and Facebook pages for information and sign up for mailing lists. Here are a few to start:

» Reserve a seat for The R&J Lounge and Supper Club’s Dinner For Twelve at 405-602-5066, and find the most recent menu at rjsupperclub.com/events.

» Learn about upcoming guest chef and wine dinners at The Metro by emailing metrowinebar@coxinet.net with “add to email list” in the subject line.

»  Ludivine keeps a running list of recent and upcoming events at ludivineokc.com/events.

» The Red Cup Supper Club’s August dinner is already sold out, but tickets are available for September’s dinner No. 7 on eventbrite.com.