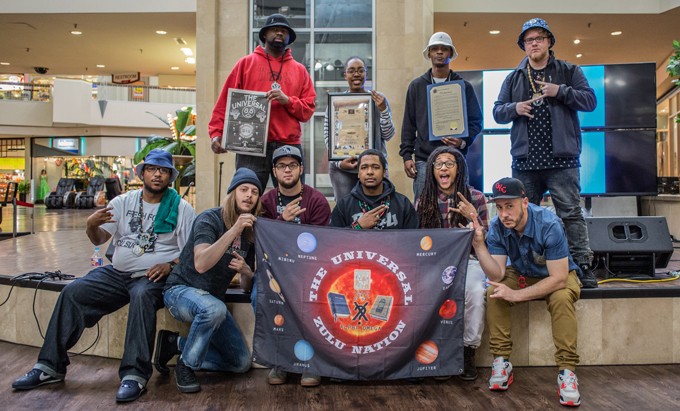 Stephen Cooper couldn’t share the good news, but he was itching to do so.

Cooper is the founder of the Oklahoma City chapter of the Universal Zulu Nation, a worldwide organization promoting peace and understanding through hip-hop culture. He emailed Mayor Mick Cornett’s office in early February, requesting the city to acknowledge Hip-Hop History Month in November.

When he got a call from Cornett’s office saying the mayor would issue a proclamation establishing the celebratory month in Oklahoma City, Cooper was thrilled. He told the chapter’s council members but didn’t want the news to get any further until they had the actual document in hand.

“It was eating at me because I was like, ‘Man, I want to tell the rest of the [members] about this,’” he said.

The second week of March, the chapter finally received a copy of the proclamation. It outlined the significance of hip-hop, the Universal Zulu Nation and the culture. It was posted on social media and shared hundreds of times.

Chapter member Lemuel Kelly said he felt like the city’s official recognition was overdue but he was nonetheless thrilled it came to fruition.

“I’m hyped up like a little kid at Christmas. For real,” he said.

Response from people outside the group has been positive, though chapter members said some interpreted the proclamation as an attempt by them to get the city’s permission to celebrate something they’ve lived for years.

Member Rod Malone said the significance of the proclamation is in sharing an understanding of the culture with the larger community.

The organization plans to celebrate with a November event, but details are still being developed. Malone said he wants celebrations to include more than music, teaching youth about the true meaning of the culture and how it differs from pop culture depictions.

Oklahoma City’s Zulu Nation chapter is more than a year old, but member Keon Ellison said the progress it has made in that time is encouraging. Some outsiders didn’t know how to interpret what it was trying to do.

“Looking at it a year ago, there was so much skepticism,” he said. “People were so unsure: ‘What is this? Are they trying to take over?’ And a year later, to see where we’re at now and where we’re going, it’s a beautiful thing. We’re definitely making a lot of headway.”

Ellison remembers the days when clubs in Bricktown refused to book or play hip-hop music, he said. Since then, more positive hip-hop acts and events  helped rehabilitate the culture’s image across the state. He’s proud to say hip-hop has reached a point where it is not only tolerated in the city, but celebrated.