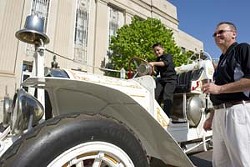 As American cities go, 125 years is on the young side.

Oklahoma City’s birthday celebration last week could be considered a Sweet 16 as the state’s capital city celebrated its 125th birthday.

OKC may be young, but it has packed a lot into more than a century of existence.

“When you look back at our city’s history, it seems we are always in the best of times or the worst of times,” said Mayor Mick Cornett on the city’s birthday on April 22.

“But you look at where we are now, and I think we are really going to thrive in the future.”

Depressions, droughts and terrorism have challenged OKC over the past 125 years, but Cornett said all those factors have made for a strong city that can weather future storms.

City officials present and past were on hand for a daylong birthday celebration last week at City Hall. Even William L. Couch, the city’s first mayor, was on hand — played by an actor.

Former mayors Andrew Coates and Ronald Norick also were present for the event and took a few moments to reflect on the history they helped create.

“I enjoyed tremendously my service with the city, it was really a lot of fun. Trust me; when you are through with your service, you will look back on it as a wonderful experience.”

A standing-room-only crowd also filled the council chambers to hear a presentation on the history of OKC.

“History is made by the decisions people make when they walk onto that stage of history,” said Bob Blackburn, executive director of the Oklahoma Historical Society.

The city’s birthday celebration was a chance for citizens to get a closer look at OKC’s history.

But city officials said they also came away from the event with a deeper appreciation of the town.

“But it wasn’t until we put the tour together that I learned more about City Hall. I have always appreciated this building greatly. Every time I walk in, I feel grateful to serve citizens, but to learn more about the building has been very eye-opening to me.”