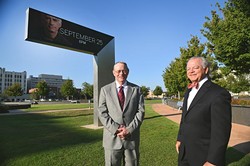 Oklahoma City Jazz Festival, a weeklong musical event celebrating Oklahoma City’s history with jazz, is underway, courtesy of veteran performers and the next generation of musicians. It continues through Saturday.

Most of the event is free, with performances at locations throughout the arts district. Benoit’s concert on Friday is the only ticketed event, and Thursday’s Jazz on the Rooftop requires a $5 cover.

“From the ’30s and ’40s when jazz started in Deep Deuce to today, jazz is still playing an important role in central Oklahoma,” said Mike McAuliffe, festival coordinator.

In addition to celebrating the past, present and future of the eclectic genre, OKC Jazz Fest also serves to elevate new talent and further musical education through event workshops, including a session taught by Benoit at University of Central Oklahoma’s Jazz Lab.

“That group is now up to 200 students. Last year they had 90 students,” McAuliffe said. “They practice during the school year — every day for an hour — and they coordinate transporting all of these kids to that one central location.”

Proceeds from the event will support Oklahoma City Public Schools’ music program and as well as the UCO music program.

Jazz on the River

Jazz on the Rooftop

Jazz on the Lawn