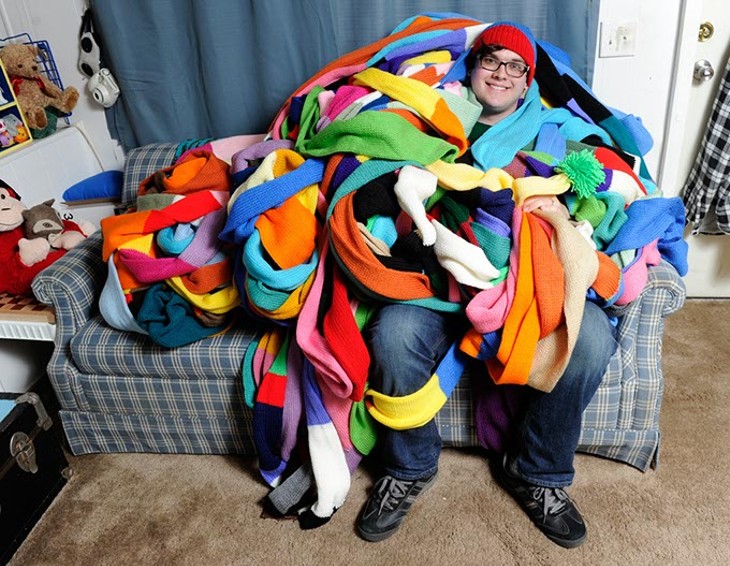 Aaron Miller’s creation is over 800 feet long, weighs about 85 pounds and lives on the bedroom floor. It has no mind of its own but could swallow your whole head.

A technicality keeps Guinness World Records from calling it the largest hat in the world, but most people will likely never see one as long as the multicolored ski hat tangled in a semi-knot on Miller’s floor.

Miller said he worked three to four hours a day on the project — sometimes more on the weekends — for six months.

“There were a lot of big night trips to Wal-Mart for more yarn,” he said.

He estimates 160 balls of yarn were used to create his entirely hand-stitched effort; he spent about $140 total. Some of the yarn was collected at garage and estate sales Miller would find online. He sometimes walked away with trash bags full of fiber on the cheap.

“For six months, I don’t think we ever made a trip to any store without getting yarn,” said Broc Simon, Miller’s fiancé.

Miller did a lot of his work after he came home at night, as a way to relax and unwind. The hat is actually made of 90- to 100-foot lengths stitched together. Any bigger and the project would become unmanageable.

An artist who also paints and takes on other craftwork, Miller titled his work “A Long Winter,” taken literally. At the end of the hat, should one manage to find it, sits a large green pompom.

Guinness won’t count his hat as one of the world’s largest, Miller said, because a “world’s largest” object has to be a model “to scale” of the original object to qualify. His hat is long, but in width, it is no different than an average ski hat.

The largest knitted hat, according to the record keeper, resides in Peru and is 66 feet 3.2 inches in circumference. In height alone, however, Miller’s hat beats the record-holder, which only stands at 56 feet 10.6 inches.

Miller said a similarly long hat he read about in Sandpoint, Idaho, helped inspire his efforts. The Sandpoint hat, 700 feet in length, is paraded around the town as part of its annual winter carnival.

When Miller completed his six-month project, he estimated his hat might be about 700 feet long, but he needed an official measurement. It was impossible to lay out and measure the hat at home, so Miller had to find a way to get the giant into his car and transport it to a local school gymnasium.

He painstakingly folded the garment into the kind of large, plastic tub in which one might store an artificial Christmas tree. Miller hauled the tub, weighing about the same as an average 12-year-old boy, to his car only to discover there was no way he could get it to fit inside his red, 1999 Chevrolet Cavalier. He removed the hat from the tub and unceremoniously pounded it into his trunk.

“I was just punching it into my car,” he said. “I kicked it a few times. And then I had to get it out again — twice.”

With the headwear zigzagging across the gym floor, Miller found that the length actually exceeded 800 feet.

It would nearly extend across three football fields. He said he spent much time comparing the length of his hat to the world’s most notable landmarks. It is more than two times taller than the Statue of Liberty and is just 44 feet short of matching Devon Energy Center’s tower.

Miller said a big question he gets is, “Why?” The hat, he said, has no especially deep meaning or social message tied to it. It served merely as a project to keep him busy and something he hoped might entertain others.

“I don’t want to change anything; I don’t like to get political or anything,” he said. “If I can get someone to smile or something, that’s enough for me.”

Miller has been knitting heavily for the last couple of years. While making his epically long hat, he was simultaneously completing and selling other, standard sized hats and scarves.

As for the future of his trademark piece, the artist said he is trying to figure out if he should sell it whole or do something else with it.

“I know I want to do something that involves charity,” he said. “I want to try and find a way to snip it off into lengths and make it into actual hats people can wear, possibly, or I just want to find the end and just unravel the whole thing and do something with that yarn.”

Whatever he decides to do, Miller said one of the biggest payoffs for him is the sense of accomplishment that goes along with finishing something on this scale.

“I think this is my first step in believing I can do something that won’t just take an hour,” he said.