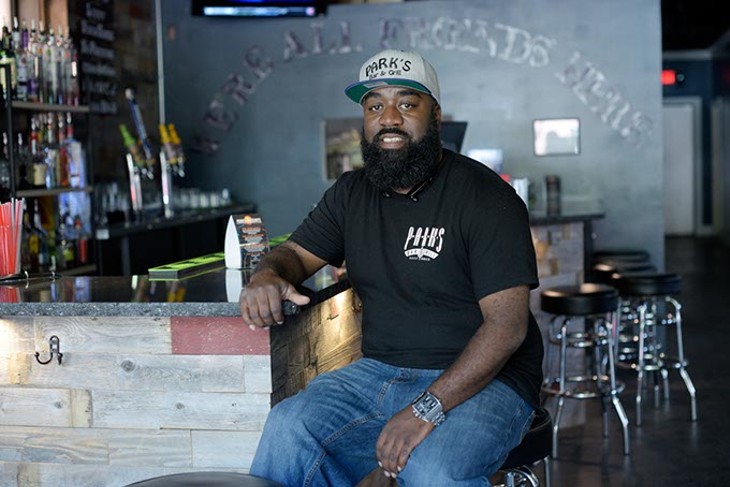 In 1962, Park Prince Sr. asked Marjorie Franklin out on a date.

In the early 1960s, black couples could find a limited number of venues in which to enjoy a night out together. One area they were welcome was Deep Deuce, known for its great jazz and blues establishments. So 55 years ago, Park Sr. took his future wife to Ruby’s Bar & Grill.

In December, Prince Jr. opened Parks Bar & Grill, 322 NE Second St., in the same location. As he walks through the door every day, he’s greeted by a painting of his parents that hangs on the wall.

From open mic nights to karaoke and even a little country music, Prince said he caters to a wide variety of clientele.

“I’m a huge lover of live music, and I love diversity,” he said. “The easiest way to create diversity is to have the country bands fans come, have the R&B bands’ fans come, and they all vibe and … everyone can get along and those cultures can intertwine.”

Prince also recently added a VIP virtual reality room where guests can play Call of Duty with a VR helmet. He knows of no other bar in the city that offers that.

Parks said he worked a year and a half to ready Parks Bar & Grill — located in the former Urban Roots venue, surrounded by condos and brownstones and nestled in the opening to the Deep Deuce district — for its grand opening late last year. He said the eatery is a tribute to his family and the fulfillment of his lifelong dream to own and run his own business.

“The building became available, and the opportunity to recreate their first date and that vibe,” he said. “I knew this is what I was supposed to be doing.”

His goal is to contribute to growing the communal feel of the downtown Oklahoma City district; to renew the welcoming and diverse vibe that drew his parents to it so many years ago.

Prince’s daughter is 10 years old and has already caught the entrepreneurial bug. Prince hopes to leave his bar and grill to her when she gets old enough.

“That’s a goal, man; that’s a generational goal,” he said. “I want it to grow so much that when my daughter has this bar when she is old enough, she can say that her father started something and she kept it going. I want it to be a generational thing.”

Print headline: Love connection, Parks Prince Jr. opens his own eatery in the Deep Deuce location where his parents first dated 55 years ago.