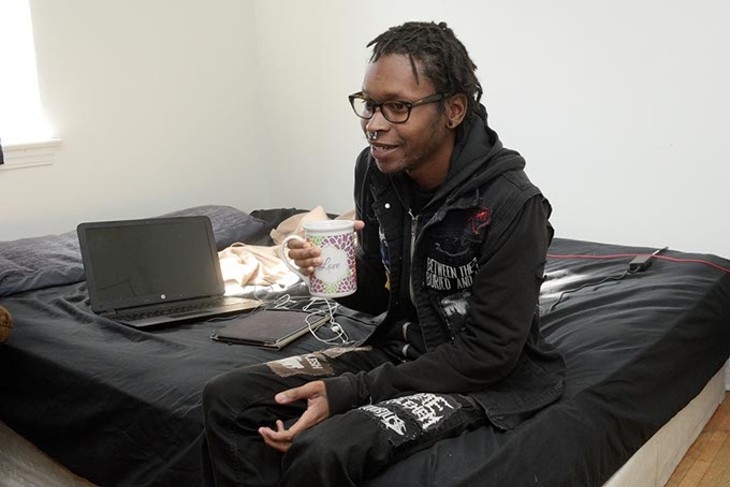 Steven Lewis is a gracious, warm and soft-spoken host as he sits in the bedroom of a house he shares with roommates near Oklahoma City’s Windsor District.

He drinks fresh coffee from a floral-printed mug labeled “Love” in fancy cursive script. The vessel humorously contrasts with the upside-down cross patch on his vest that reads, “Fuck me Jesus.”

“I feel like if I go to a church, I’m just going to explode,” he said.

Lewis, who moved to Oklahoma from Florida in 2014, is an atheist, but the idea of Satanism intrigues him. He draws on the concept of the Antichrist and his own general anxiety and depression in crafting music for Dead & Grey, his raw, one-man black metal project.

All of Dead & Grey’s music is made with exclusively virtual instruments utilizing sound production programs like GarageBand. It’s an aesthetic that is common in the do-it-yourself black metal world and fits the genre’s well-established ethos. Aside from a general connection to Satanism and harsh Nordic winters, black metal is known for low-fi, bare-bones recordings.

The first Dead & Grey album, appropriately titled I (the Roman numeral for one), was released in February 2014. Lewis took about a year off to work on other projects but began renewing his efforts in summer 2015, when he put out follow-up album II.

Lewis uses a drum machine for percussion at speeds faster than most humans are capable of replicating. While his trademark shrieking vocals seem otherworldly, his piercing voice is a natural gift.

Still, what sets Dead & Grey apart is Lewis’ creative vision and propensity for writing. His ideas easily outpace his ability to actually produce the music, which helps speed up the technical process.

“Usually if I’m really excited about it and I have everything written down, I’ll just get right to it,” he said.

Lewis grew up in a strictly Christian family, but he said he has consistently rebelled against religion since childhood. That conflict often led to rough times at home in Deltona, Florida, near Daytona Beach.

He partied and caused general havoc for his parents. Lewis remembers his mom bringing pastors to his house to pray for him.

After turning 23, Lewis finally had his fill of Florida. He moved to Oklahoma in 2013 because he had a close friend here. It didn’t take him long to learn about local death metal and punk music scenes that were much more vibrant and welcoming than anything he’d experienced back home.

“There’s a lot of really cool people here,” he said.

Lewis’ interest in black metal started in high school as a result of his own online research. The first black metal album he heard was a Deathspell Omega project recommended by someone on a metal forum. It immediately fascinated him.

“Everything about it, from the vocals to the guitars to the drums being super fast and technical, was just mind-blowing,” he said. “I thought, ‘Wow! This is insane.’”

Lewis has been in a few bands before but never considered himself a gifted player of real instruments. His musical journey took off in earnest shortly after moving to Oklahoma, when he got his first iPhone and began experimenting with GarageBand. Lewis said his technique has greatly improved since then and he’s constantly learning new things from friends and connections he has made in the city.

Lewis plays his Dead & Grey material live, but not as frequently as he would like. There are several obstacles that stand in the way, one of which is that he does not own a car.

“I’m really nervous, and I have anxiety like crazy,” he said. “Every time I play a show, I get so nervous, but I’m just like, ‘Let’s just get this over with and do it.’ I have a fun time playing it; I put all my energy into it and make it as loud as possible.”

The energy he puts into his performances has led to a lot of positive crowd feedback, which in turn has helped steadily build Lewis’ confidence. He remembers one time he performed at a noise house show in Norman where no one in the crowd had any interest in black metal.

Before the show, Lewis was not sure how they would react to his shrieking music, but his reception after the show was very warm.

“Everyone was telling me how great it was and how different it was to what they usually see it, so it was really cool to get that feedback,” he said.

Lewis is aware that Oklahoma sits squarely in the Bible Belt, but he does not let that have any bearing on the often-Satanic content in his music.

“I feel like I’m standing up for it,” he said. “I’m an atheist, but I like the idea of [Satanism], and it just pisses people off. I grew up in a really strict Christian home, and just to do something different is gratifying.”

Lewis doesn’t let outside opinions affect him because his music was never an attempt to claim widespread fame. It’s a very personal sound, which is part of what has endeared it to others.

“I don’t do this just to get popular or anything,” he said. “I do this because it’s fun to me and I have a great time doing it.”

Stream or purchase music at deadandgrey.bandcamp.com.