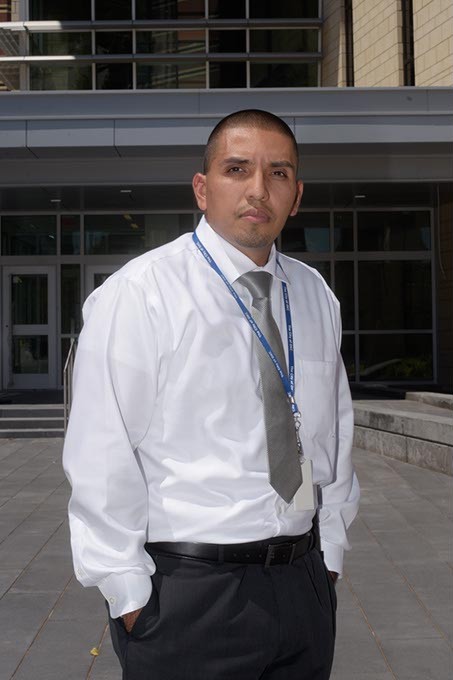 On any given day, Manuel Hernandez is called to meet one-on-one with a Spanish-speaking court patron who has arrived at the Oklahoma City Municipal Courts and doesn’t understand their ticket or what they need to do to resolve it. As the court’s community relations coordinator, Hernandez goes through the options and answers any questions in Spanish.

A few hours later, Hernandez finds himself repeating that information and answering similar questions. He doesn’t mind, as he knows entering the municipal court system can be confusing and nerve-wracking. More importantly, he knows it doesn’t have to be that way. When court patrons have the right information and know what to expect in the municipal court system, cases move through the system more efficiently and matters are resolved quickly.

“If you take it down to layman’s terms, I am the bridge between the courthouse and the community,” Hernandez told Oklahoma Gazette on a recent afternoon at the Oklahoma City Municipal Court building, 700 Couch Drive. “If you don’t fully understand what is going on, I am going to be the guy who explains it to you. I will share the options. If I don’t know what the options are, I will go find out for you.”

Last month, Hernandez, who is fluent in English and Spanish, joined the municipal court staff as its first community relations coordinator, a position added as part of the court’s ongoing efforts to strengthen the efficiency and effectiveness of the court system. One of his main duties is informing patrons of their options and developing and implementing outreach programs to enhance the court’s relationship with the community.

After only a few weeks on the job, Hernandez sees the need for such a position. At the downtown courts building, he meets with patrons anxiously waiting to resolve their issues and get back to work and their daily lives. Outside the municipal court, during visits to community centers and churches, Hernandez hears all the reasons people stay away from municipal courts. People say municipal fines are too high, that they face multiple municipal warrants, they don’t have the money to clear it up and that the municipal court system sends poor people to jail because they can’t pay.

Hernandez not only explains how the system works but how it has changed in recent years. People who enter Oklahoma City’s municipal court system these days will find staff eager to help resolve cases. No longer are defendants with Oklahoma City municipal court warrants arrested when they enter the building, nor are they arrested if they can’t pay fines and court fees. Instead, defendants are brought before a judge immediately or schedule an indigency hearing.

“It’s hard for people to believe that if they have a warrant through the municipal court, we will not arrest them if they come to court,” Hernandez said. “A lot of people don’t believe that. It’s the main message we are trying to get out there, and we are really reaching out to the community. We have over 100,000 warrants at any given time. We want to get them resolved.”

Prompted by the U.S. Department of Justice’s report on the Ferguson Police Department that documented widespread abuses in its police department and municipal courts, City of Oklahoma City leaders and its municipal court leaders started discussions about policies and procedures in 2015.

They recognized that the system could be improved to better serve the public. In addition to establishing new ways to enhance the sharing of information, leaders were determined to prevent people from being sent to jail due to poverty.

Now, after the implementation of new policies and reforms, court leaders said their efforts have changed the culture of the municipal court.

“There has been a significant change that even people with a very brief exchange in our court can see. It is about information-giving,” said Cindy Richard, deputy municipal counselor.

Reforms included translating court forms and brochures into Spanish and other languages, creating an Understanding Your Ticket brochure for police to hand out with misdemeanor tickets, updating the website and mailing post card notices of missed court dates listing the 15-day grace period to avoid increased fees or a warrant. While some of the changes seemed minor or small, court staff believes they have increased the likelihood of defendants appearing in court and defendants paying or making the effort to pay fines and fees.

At the same time, the court has made strides to better address indigent people who are issued citations for speeding, trespassing, stealing and other city law violations. Indigent people are entitled to a court hearing on their ability to pay when fines and court fees are issued; the municipal court has expanded opportunities for low-income people to come before a judge to explain their financial circumstances. There are now eight indigence-hearing dockets each week with a review docket set on Fridays for defendants on a payment schedule to appear before a judge.

“If anyone says they can’t pay their ticket, they are given a packet of information,” Richard said.

The packet details what documents a judge needs to rule on reduced or suspended fines, payment plan arrangements or continuing with the set fine.

“If they want to plead to their ticket but they don’t have the money that day, we send them to an indigene hearing,” Richard said. “Sometimes people just need more time.”

In late October, municipal court operations will move across the street to the new Oklahoma City Municipal Court building, 701 Couch Drive. A $22.8 million project funded by the 2007 General Obligation Bond program, the new court building is home to six courtrooms as well as court offices and attorney-client rooms. And although judges and court staff will move into the modern offices, the true beneficiary of the courthouse is the public, said LaShawn Thompson, municipal courts administrator.

The new building will allow people who simply want to pay a ticket to visit a kiosk without going through the security checkpoint. Additionally, kiosk screens will provide the public with the building’s directory as well as the dockets scheduled for the six courtrooms.

With a new building and reform efforts continuing, Hernandez is confident that the public will begin to see the municipal court in a different light.

The new building is user-friendly, which Hernandez said matches the new philosophy of the municipal staff.

“We are taking the fear out of coming to court,” Hernandez said. “We want to be more appealing to the public. Let’s get everything resolved by finding the best solution for everyone.”