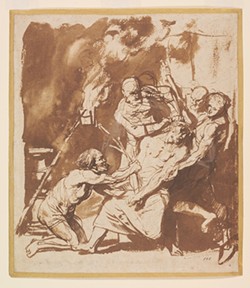 Master Strokes: Dutch and Flemish Drawings from the Golden Age is the latest headlining art exhibition set to make a tour stop at Oklahoma City Museum of Art (OKCMOA). The exhibit, which includes 90 works by about 60 total artists, opened Oct. 28 and runs through Jan. 21, 2018 at the museum, 415 Couch Drive.

If it feels like OKCMOA has been riding a powerful wave of momentum for the last couple of years, it is because it is true. The museum broke major ground and set personal attendance marks when, in June 2016, it became the only North American tour stop for the traveling exhibition Matisse in His Time: Masterworks of Modernism from the Centre Pompidou, Paris. The exhibit highlighted the work of French artist Henri Matisse and included work from many of his modernist contemporaries, including Pablo Picasso.

OKCMOA director of curatorial affairs Michael J. Anderson said Master Strokes holds up the bar of excellence the museum set in 2016 with Matisse in His Time.

“We know that exhibition will never come back here, so it’s a challenge to maintain that level,” he said. “With Kehinde Wiley and now Master Strokes, I think we’ve been able to follow that groundbreaking exhibition with worthy successors to it.”

“There will probably, at most, end up being just three venues in North America [where Master Strokes tours],” Anderson said. “We may end up being the only venue in the United States, so this is really a rare opportunity for people to see this collection. It really is one of the great collections in Europe.”

As with many great things, there was some serendipity involved in OKC landing the international debut of Master Strokes. The Victoria and Albert Museum was looking for a place to begin its tour this fall at the same time OKCMOA was looking for a touring exhibition to schedule for its 2017-18 holiday season.

Anderson said OKCMOA first got in touch with the Victoria and Albert about a year ago.

“After we heard of their plans, we got in touch and managed, through some good fortune, to be the first venue for this exhibition,” he said.

Victoria and Albert is one of the most famous museums in the world, but it is primarily known for displaying the decorative arts — works that are both beautiful and functional, like pottery, fashion and dishware. The English museum is nevertheless home to one of the world’s finest European holdings of sketches, drawings and prints. Anderson said this is the first time such a large portion of the collection has traveled outside Britain.

Master Strokes covers about 400 years of art, beginning in the Northern Renaissance of the 16th century and ending in the 20th century after the time of Matisse and Picasso. The exhibit includes artists in the Netherlands and Flanders (modern-day northern Belgium).

One of the things Master Strokes shows is the development of an artistic genre. In the 16th century, for primarily economic reasons, a mercantile middle class began to develop. For the first time, the average person could afford to buy art.

“That led to the development of all kinds of innovations that hadn’t existed before,” Anderson said.

Those who visit the exhibit will notice on the museum label that pieces are marked either for the mostly Protestant Dutch north or the Catholic Flemish south. Anderson said it should not take long for guests to see a difference in subject matter between the two areas.

The drawings in the exhibit range from sketches to working studies and finished “pictured drawings.” A variety of tools and techniques are used, including watercolors, trois crayons and pastels. 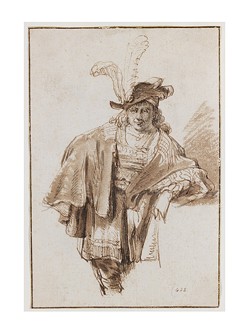 Anderson said Master Strokes can be seen as a reflection of the museum’s ambition and its commitment to bringing excellence to the local community.

“We don’t have any Rubens in our collection,” he said. “But through exhibitions like this, we’re able to bring those to Oklahoma City. You can see some, really, masterpieces by Rubens, and that was the same sort of philosophy we had going into the Matisse exhibition.”

While many guests will connect Master Strokes and Matisse, Anderson said while Wiley’s work was in part a response to Baroque and Neoclassical styles, he also greatly respected them. It is OKCMOA’s hope that frequent museum visitors will notice a running narrative through its exhibits.

“We want to bring in different periods, different styles, different approaches, but we do want to tell a coherent story with our exhibitions as well,” he said.

Anderson said Master Strokes is ideal for multiple viewings and perfect for families and entertaining out-of-town guests during the holidays.

“That’s sort of the strength of this exhibition,” he said. “Because there are more than 90 works and so many artists and styles, it’s really a wonderful exhibition for the holiday season. I think it’ll have that kind of feel. On a cold day, it will be a great time to come in and spend some time with these works.”

Master Strokes: Dutch and Flemish Drawings from the Golden Age