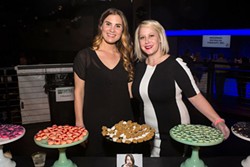 Thirty-three years ago, a small committee of volunteers hatched a plan for what has become one of Oklahoma City’s best-loved, longest-running and most successful fundraising galas: Omelette Party, benefitting Oklahoma City Museum of Art.

Its 2017 iteration, themed Viva Las V-EGG-as, is 7 p.m.-midnight March 3 at Chevy Bricktown Events Center, 429 E. California Ave., and will most likely sell out — prospective eggheads had better scramble to secure their tickets. Tickets are $100-$125 and are only available in advance at okcmoa.com or by phone at 405-236-3100.

Highlights of the evening are its masterpiece-laden art raffle, which occupies a sizable section of the events center. Art for this year’s raffle was donated by 50 local artists, including sculptors, painters and jewelers.

“This is my seventh year to be a part of the Omelette Party and donate a piece of art,” said Oklahoma City sculptor Joe Slack.

Details surrounding this year’s piece have yet to emerge, and Slack often finds that inspiration doesn’t strike until the week before the event.

“There is nothing like a deadline to inspire a great idea,” said Slack, who has been a full-time artist for 12 years.

Art is his livelihood, and he feels a sense of obligation when it comes to supporting the arts community.

Omelets are inexpensive to make, and that was one of the reasons for making the versatile dish the centerpiece of the event, which is the brainchild of legendary Oklahoma City architect and arts supporter George Seminoff, who passed away in 2013.

Fare for this year’s party will include omelets, egg dishes and sweets created by chefs from 13 restaurants, bakeries and other purveyors including Jason Campbell from Mary Eddy’s Kitchen x Lounge in the new 21C Museum Hotel; Michael Haddad from PaceButler Corporation; Frank Newcomb and his team of volunteers; and Bill Leib, a chef instructor from Francis Tuttle’s culinary arts department.

Leib, an East Coast transplant who has called Oklahoma home since 2009, and his team of 13 students have come up with a unique dish that looks a lot like an omelet.

“We are making an egg yolk taco,” he said. “You salt-cure the yolks and dehydrate them. Then you can roll them out and make what look like soft tortillas. This process gives you a wonderful vehicle for serving an appetizer.”

It’s a dish he often served during his early years as a chef. He and his team will fill the egg yolk taco shells with sautéed beef tongue, cauliflower that has been deep-fried in chicken fat and house-made salsa verde and pickled onions.

“I’m not a huge fan of a traditional omelet, personally, but this dish looks a lot like an omelet,” Leib said. “My students will help prep everything for the event. The timing is perfect because we are working on vegetable preparations right now, so pickling and salsas are perfect. We will begin the prep the Thursday before the event, and then on Friday, I will take a team of three to four students with me to actually execute and serve the tacos at the event. We’re bringing enough ingredients to make 600 egg yolk tacos.”

Frank Newcomb, owner of Tony Newcomb’s T-Shirts, has been cooking for Omelette Party guests for a long time.

“It’s been 12 or 15 years, maybe longer,” he said. “I got involved because I love to cook. I cook competitively; it’s what I do to unwind. One year, I just asked if I could be involved, and now I look forward to it each year.”

Newcomb competes in chili and barbecue events but has also added omelets to his competitive repertoire.

“We do events for all kinds of groups,” he said. “I’ve really enjoyed getting to know everyone we cook with at the Omelette Party, and I make sure to go around and test everyone else’s dishes.”

Newcomb’s team consists of himself, chef Bill Shipley, and a buddy, Joe Green, who’s a retired banker from Chickasha.

“We may be the only team that makes traditional, made-to-order, hearty omelets,” he said. “We have all of the veggies, cheese, bacon, ham and all sorts of things and make great omelets. There’s an element of showmanship to our station. We laugh and flip our omelets, and if the line isn’t too long, we’ll flip and catch each other’s omelets. That doesn’t happen too often because we usually have a pretty long line. We just love it.”

Viva Las V-EGG-as is co-chaired by Cindy Friedemann and Matt Thomas. A plethora of showgirls will be on deck to lend authenticity, and guests will enjoy an open bar and a dress-up photo booth with a Sin City theme. DJ Brian Smith and live music by Stars will round out the evening’s entertainment.

“This year’s Omelette Party builds on a 33-year tradition with another great theme: Las Vegas,” Friedemann said. “We’re excited to welcome back many of the wonderful chefs and restaurants that have made this party one of the most fun benefits in the metro.”