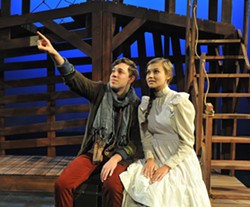 “We had Avenue Q on the schedule last year,” said Don Jordan, CityRep’s artistic director. “However, that was the year that our customers really wanted to get the One-Man Star Wars back.”

As a result, Avenue Q debuts Feb. 12, making it perhaps the most interesting Valentine’s date imaginable. Who needs long waits at restaurants when you can see what all the puppets from your childhood were really thinking?

Auditions for the season were completed in August, and Haque, founding artistic director and business manager, said the number of auditions indicated that CityRep’s visibility is increasing.

“We had eleven actors from Dallas, a couple from Shreveport and Louisville and electronic resumes from Chicago and New York,” he said.

CityRep does not always hold open auditions. The company has been around long enough to develop a great pool of local talent, but the upcoming season’s shows require more actors, Haque said. By using American Theatre Magazine and Theatre Communications Group, a professional organization for regional theater, CityRep has managed to generate interest across the region.

The company is bringing back Jonathan Beck Reed to play the role of Black Stache in the season opener Peter and the Starcatcher. The Peter Pan prequel and multi-Tony winner will be produced jointly with Oklahoma City University’s School of Theatre. The play will be performed at OCU’s Burg Theatre, 2501 N. Blackwelder Ave., instead of Civic Center Music Hall.

“We are diligent to reach out to other theaters and companies to coproduce,” Jordan said. “That’s one way to build awareness and a theater-friendly community.”

For the season’s second performance, A Funny Thing Happened on the Way to the Forum, CityRep brings back Robert Picardo to play the role of Pseudolus. Picardo has been in movies and television for decades and is likely best known for his roles in The Wonder Years, Star Trek: Voyager and Stargate SG-1.

“He was theater-trained at Yale as well,” Jordan said. “We’re excited to have him playing Pseudolus in one of the funniest plays ever written.”

A Funny Thing Happened on the Way to the Forum is also a joint production with Oklahoma City Community College (OCCC). The production, which opens Nov. 19, will be staged on OCCC’s campus in the new Visual and Performing Arts Center Theatre.

Jordan said the company tries to offer an eclectic slate of productions every year and it always includes thought-provoking stories. He believes theater should offer a service to the community by generating dialog about important topics.

The season’s fourth show is ’night, Mother, the 1983 Pulitzer Prize winner for drama. It focuses on a mother-and-daughter relationship, and the dialogue follows the pair’s conversation after the daughter Jessie announces she will commit suicide.

“I learned that suicides among our service members was spiking after they returned from deployment,” Jordan said. “Shortly after the recession, I read that suicides were up in people over 50. I thought, ‘We have to talk about this as a community.’”

The final show of the season is an appropriate one for an election year. Red Hot Patriot: The Kick-Ass Wit of Molly Ivins focuses on the scathingly funny former political commentator, author and comic. Ivins spent most of her professional career writing for newspapers in Dallas and Fort Worth, where she took on Texas politicians — including the Bush family — for their exploitation of the “good ol’ boy network.”

“We might have two female candidates in next year’s election,” Jordan said, “so I think this will be a timely production.”

Jordan travels frequently to keep an eye on the industry, and he said Red Hot Patriot is currently one of the hottest shows in the country. The June 3 showing will be the play’s Oklahoma premiere.

Tickets for CityRep shows are $30-$35 and are $8 for students. Discounts are available for groups over 10. The student ticket price is also offered to service members, including military, police and firefighters.

Peter and the Starcatcher

on the Way to the Forum