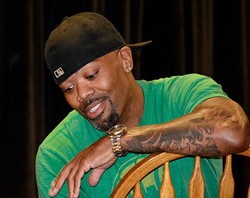 Oklahoma City Theatre Company continues to bolster its reputation as one of the city’s most daring troupes with its latest production, Beyond the Stratosphere.

Written by Oklahoma City playwright La’Charles Purvey, Beyond the Stratosphere is just the latest challenge to performers and audiences alike in the company’s 2015-2016 season, aptly themed Barely Legal.

Purvey’s story features a diverse group of five black men who are trying to find meaning in their lives at an early 1990s Christmas party. Each one is marginalized in some respect and is dealing with HIV and AIDS.

It’s anything but George Bailey running through the streets of Bedford Falls, and even Purvey’s synopsis seems a bit dark.

“It is some heavy stuff, and it deals with people from a marginalized community, but it’s ultimately a message of hope,” Coburn said. “It’s fun, and there are some real moments of comedy, so it’s more like a modern Christmas tale. It deals with heavy stuff, but we don’t want people to go away feeling like the Earth caved in on them.”

Coburn said it was especially vital to everyone that the play be presented during this time of year.

“I feel like it’s really important because it talks about a taboo subject, and that’s HIV and AIDS. People are still suffering from this today, and although it’s not as prevalent as it was, African-American men are still the No. 1 affected group in America when it comes to the disease,” Coburn said. “We immediately decided that this show needed to be in this season, because it’s a subject that’s just not talked about enough.”

As for the nuts-and-bolts benefits of working with a playwright that lives down the street, Coburn said she hopes the results will speak for themselves.

“We’ve been doing a lot of work on the show because it’s actually been workshopped here for about two or three years now,” Coburn said. “La’Charles Purvey is a very talented playwright, and we’re so lucky that he’s allowed us to take his work and workshop the piece and hopefully make a product that he is proud of.

“I’m really lucky because he is local, so he’s been involved in the process, from rehearsals to feedback and everything else. If you’re doing a Chekov piece, that’s not possible.”

“It’s different from anything and everything else you’re going to see this holiday season,” she said. “We love our traditions, especially at this time of year, but this is something that breaks the mold and gets you out of that Christmas rut. If you’ve had enough Rudolphs and Frosty the Snowmen, then this is perfect.”