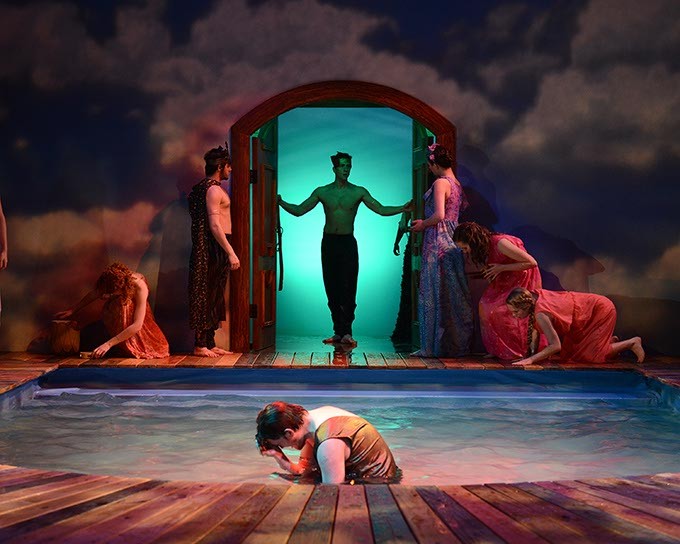 D. Lance Marsh, artistic director and head of performance for TheatreOCU, usually tries to stay away from themed seasons. But the metamorphosis aspect of each production presented itself as the selection grew.

“A lot of these plays are about transformation, the power of looking at yourself and looking at the world through someone else’s eyes and how becoming transformed is really about being a human being,” Marsh said.

TheatreOCU starts its fall season with a co-production of Peter and the Starcatcher Sept. 18-27 with Oklahoma City Repertory Theatre (CityRep) where some roles will be filled by local professionals and local community actors along with OCU students and faculty. The play is the prequel to Peter Pan and details how Peter became Pan.

Oct. 22-24, TheatreOCU will perform Oxygen, which is a scientific mystery about who the Nobel Prize should be awarded to for the discovery of oxygen. The play features unexpected twists and turns while alternating between time periods.

Later next month, TheatreOCU presents a festival of solo performances with three different solo performances by members of Actors’ Equity Association. The festival runs Oct. 28-31 in Walker Center. Luke Eddy, movement professor at OCU, will perform the Irish vampire/ghost story St. Nicholas. Lisa Dalton will take the stage with a one-woman show based on Russian author Anton Chekhov’s short story The Darling. Los Angeles-based actor Doug Tompos will perform Bent to the Flame: A Night in the Life of Tennessee Williams.

“It’s interesting to watch a play where it’s one actor transforming into a character and to see one person carry the ark of the story,” Marsh said.

TheatreOCU will end its fall lineup with The Man Who Came to Dinner Dec. 4-12 in Burg Theatre. The play is a classic American farce from the middle of the 20th century centered on a famous radio personality who happens to be a curmudgeon. Over the course of the play, he learns how to value the people in his life.

Feb. 5-13, TheatreOCU performs a co-production of The Giver with Oklahoma Children’s Theatre, and the play is based on the young adult novel by Lois Lowry. The story focuses on a futuristic community where everyone is happy, except for one person who holds all the burdens.

Feb. 26-28, TheatreOCU will produce The Last Days of Judas Iscariot. The play will be performed in the Moot Courtroom in the OCU School of Law in downtown Oklahoma City. The performance will be a staged reading set up in the confines of the courtroom with the audience sitting across the bar.

Visit okcu.edu for more information about TheatreOCU’s 2015-16 season or to purchase tickets.

Arts Bent to the Flame: A Night in the Life of Tennessee Williams Oklahoma City University Peter and the Starcatcher St. Nicholas The Last Days of Judas Iscariot The Man Who Came to Dinner theater Transformation