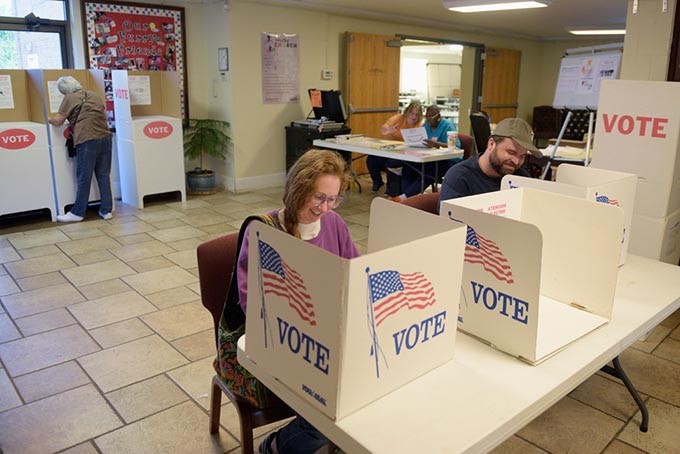 About a week after Oklahoma City voters authorized a $967.4 million general obligation bond program for investing in 13 different areas of city government, Oklahoma City’s civic leaders cut the ribbon on the new Municipal Court building, one of the hundreds of projects listed in the 2007 bond program.

Following elections, it is typical for elected officials and government leaders to hear questions about projects moving forward. As in past bond elections, the answer is that it takes time. Currently, city workers are in the midst of completing 2007 bond projects, which range from installing sidewalks to resurfacing residential streets. City officials expect all 2007 bond programs projects to be completed or under construction by 2019.

The Sept. 12 election, which asked Oklahoma City voters to decide the fate of the 2017 General Obligation Bond program and two sales tax initiatives, will carry the city forward in its next decade of infrastructure projects. Voters endorsed the $1.2 billion plan, which included a tax hike in exchange for more police and firefighters.

“The difference is now we have the resources to do it,” Nelson said.

What did voters approve?

Voter authorization allows city officials to move forward on hundreds of projects that will be completed over the next decade. Projects from the $967 million General Obligation Bond program include a new police and fire training center, improvements to the Softball Hall of Fame and Chesapeake Energy Arena, construction of a new south OKC library, repairs to Civic Center Music Hall and purchase of new Embark buses, along with thousands of street projects, which include resurfacing, reconstruction and widening.

Further, the city will boost its investment in street projects through the passage of the temporary 1-cent MAPS (Metropolitan Area Projects) tax. The tax — collected beginning the first of the year and ending in 2020 — is expected to raise $240 million. The tax has been viewed as a placeholder, bridging the MAPS 3 program to its next installment.

In the election, which brought out about 44,000 voters, the proposed permanent quarter-cent sales tax found favor in 52 percent of voters. Beginning Jan. 1, the city’s sales tax rate will rise from 3.875 to 4.125 percent. With the combination of state and county sales tax, most shoppers will pay 8.625 in total sales tax, with the sales tax slightly higher in Cleveland, Canadian and Pottawatomie counties.

City officials estimate the new tax will raise $26 million annual with 65 percent dedicated to public safety. Over time, funds raised from the tax will facilitate the hiring of 129 new police officers and 57 new firefighters.

The new quarter-cent sales tax is the first general obligation sales tax rate increase since 1976. In an interview, four-term mayor Mick Cornett explained the increase is in response to sluggish tax collections into City Hall, which local economists attribute to increased online shopping.

On Oct. 10, Midwest City voters will weigh a proposal to raise the current sales tax by seventy-five hundredths (0.75) of one percent. Funds generated from the tax increase would be split among general operations, fire and police. Midwest City officials cite flat sales tax revenues coupled with increasing budget demands as key reasons behind the sales tax proposal.

Cornett believes the city’s history of investing in the projects outlined in voter-approved bond issues and MAPS initiatives would earn favor among voters as they considered the city’s proposals and a tax increase.

“The citizens trust their city government,” Cornett told Oklahoma Gazette. “They don’t trust the other levels of government anywhere near that level. It has taken decades to build up trust between us and our voters.”

Following the election, Cornett’s statement echoed his words from earlier in the month.

“We appreciate the trust our residents placed in us and will continue being good stewards of taxpayer money by delivering what we promised,” he said.

A key message of Taylor’s campaign was his current and future efforts to correct past decisions and actions by Whetsel. Part of his job going forward includes advocating for more funding from the county’s leaders. In addition to investing in the jail’s infrastructure, Taylor wants to invest in employees.

“The employees deserve better, and that’s certainly one of my goals,” Taylor said in an interview with Oklahoma Gazette in August. “As soon as possible, I want to direct some money to salaries. We are so far below the average pay for this area. It is an absolute travesty.”

In Norman and Noble, voters elected Democrat and educator Jacob Rosecrants to represent House District 46, a seat previously held by Republican Scott Martin. Rosecrants became the third Democrat to be elected in a special election to the Oklahoma Legislature this year. He earned 60.43 percent of the vote while Republican Darin Chambers captured 39.57 percent.

Print headline: Future plans; Oklahoma City voters set a course for infrastructure development over the next decade with the passage of two sales tax initiatives and a bond issue.