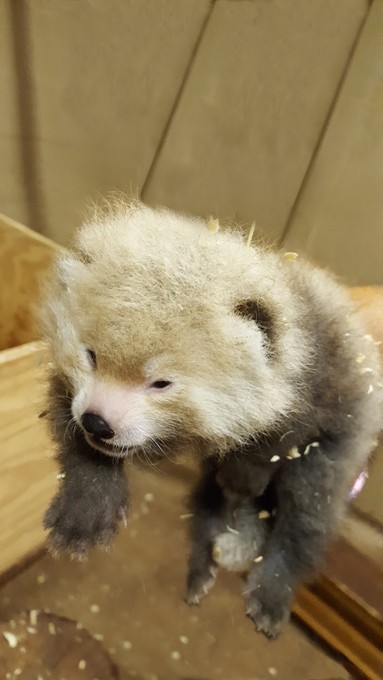 Unfortunately, while two panda cubs were born on July 3 to mom Jaya, 9, and dad Lhotse, 2, only one survived.

“We are saddened by the loss of one of Jaya’s cubs but thrilled that the surviving cub is healthy and receiving great maternal care from Jaya,” said Nate Strong, animal supervisor, in a media statement.

Zoo staff recently determined the surviving red panda cub is female and named her Wasabi, or Sabi for short.

Jaya and Sabi have been in their nest box in the back of their habitat for several months, and Lhotse spent some time in the animal hospital after Sabi’s birth.

“He’s a young male, so he doesn’t know his boundaries as well,” Strong told Oklahoma Gazette. “He squabbled with [Jaya] a bit. So we decided to pull him out and let her bond with the baby.”

The zoo plans to share updates on social media about the red pandas and when they will be visible in their habitat, which is located across from the zoo’s Endangered Species Carousel.

Sabi left her nest box and started exploring Sept. 28, and she and her mother will return to their exhibit this month.

The breeding season for red pandas runs December through March, and with a delayed implantation, cubs usually start developing around June.

As a member of the Association of Zoos & Aquariums (AZA) since 1981, the zoo participates in the Red Panda Species Survival Program (SSP), developed by the AZA to help promote genetic diversity through species management.

“Looking back, we did see a little bit of evidence [on the X-ray images], but it wasn’t conclusive when we first looked at it,” Strong said of the panda’s early pregnancy in June. “We’re always cautiously optimistic; so we still prepare just in case.”

Red pandas were upgraded from a vulnerable to an endangered species in 2015, according to the International Union for Conservation of Nature (ICUN) Red List of Threatened Species. Only about 10,000 red pandas live in the wild because their habitats are threatened by deforestation, agriculture, cattle grazing and competition for resources.

The SSP works with the Lincoln Park Zoo in Chicago to do computer simulations of the genetics and make breeding recommendations.

“We found out our female is pretty globally valuable, whereas (regionally) her bloodline is actually produced quite a bit,” Strong said. “So the SSP is looking for options that way to see what they can do globally.”

The red panda has caused a lot of controversy over which taxonomic animal family it belongs in.

Red pandas have canine teeth, which has led scientists to classify them as carnivores. In the past, they were grouped with raccoons or bears, but now they’re the only living species in the ailuridae family, which is in the mammal order Carnivora.

Eventually, the male red panda will be put back with the female, and around November, when Sabi gets older, the zoo will work with the SSP to see where to place her and whether the Jaya should be bred with Lhotse again.

Sabi is Jaya’s fifth offspring since arriving at the OKC zoo in 2011.