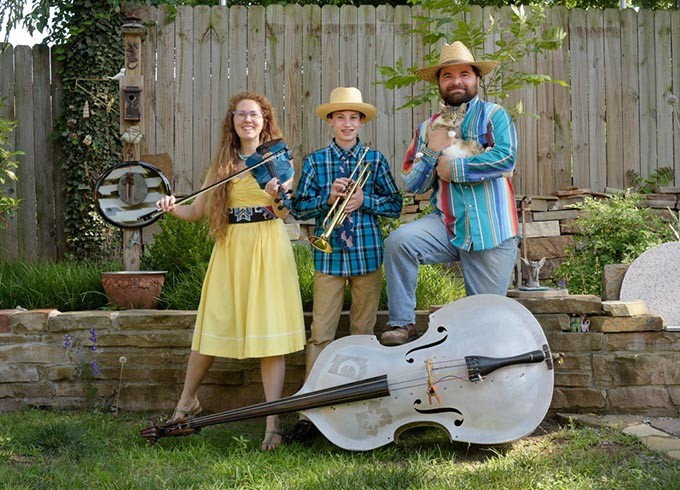 For those who go out and about in Oklahoma City, it’s not a question of if but when they will encounter folk-centric family band Casey and Minna.

The husband-and-wife duo — sometimes a trio with the addition of 13-year-old son August Biggs — can be frequently spotted out in the area, playing live music at open-air festivals, private parties or wherever people like to gather and feel good. Casey Friedman plays guitar and upright bass while Minna Biggs handles fiddle. August mostly plays tin whistle, but with some trumpet and guitar as well.

Casey and Minna incorporates folk styles from across the globe, including Europe, Asia and the United States. The band can be seen 3-5 p.m. Saturday at Anthem Brewing Company, 908 SW Fourth St.

Some might wonder how a band could possibly function as a family outside show hours. The family wonders how it possibly couldn’t. Working together as a unit is the only thing that makes playing music full-time a viable family business.

“We’re not splitting money up,” Minna Biggs said. “It’s all going to support one home.”

Both halves of the couple grew up around Oklahoma City, but they did not meet until their 30s, despite running in somewhat close circles.

“Casey and I often reflect about the many unknown encounters we must’ve had growing up in Oklahoma City,” Biggs said.

Biggs moved to Colorado after high school and spent her 20s in the state before returning to Oklahoma around 2009 to be closer to her family. Her first official gig back in Oklahoma was in Civic Center Music Hall’s Meinders Hall of Mirrors. Friedman, whom she did not know at the time, was her soundman.

She was curious about him, but Friedman and Biggs’ lives diverged for about a year until they worked together again to record a video as part of Friedman’s YouTube series Acoustic Oklahoma. Friedman’s video series led to a weekly live acoustic showcase, and he would often call Biggs to book her band for the show.

“His calls to book my band were lasting longer and longer,” she said. “It finally became pretty clear that we were developing more than a business relationship.”

Biggs had not been on the Oklahoma music scene long when they officially started dating.

“I had no idea he was a bass player or really even a musician,” she said. “What a nice surprise the first time I saw him onstage with his band, Burlap Tuxedo.”

Casey and Minna launched as a guitar-fiddle duo in 2011 but became a full family act in 2013, when Biggs’ son August played with the band for the first time as an 11-year-old.

“When not in school, August is the star of the show,” she said.

His mother described him as a natural musician. August grew up around her rehearsals and performances and feels at home on stage.

Biggs said her son’s musical journey began in elementary school, where he was having a tough time.

“We kind of bribed him and said, ‘Hey, if you learn an instrument, we’ll think about homeschooling you,’ which was kind of an empty bribe,” she said. “He went ahead and he learned it. He enjoys playing music, but he still goes to public school, only he’s much happier now.”

The Belle Isle Enterprise Middle School student primarily plays tin whistle with Casey and Minna now, though the first instrument he learned to play was the recorder. It would be easy to picture August as a future career musician, but Biggs said he dreams of becoming an orthodontist.

“I’m so proud and grateful August still wants to make music with us,” she said. “He’s gained self-confidence, courage and a vivid experience as a professional musician working hard in Oklahoma.”

Biggs remembers being 3 years old and hearing about her brother’s dream to play the violin. Because she wanted to do everything he did, she was not far behind in lessons.

The siblings learned classical music growing up, but Biggs enjoyed listening to the radio, specifically local station KJ103. She loved Cyndi Lauper, Madonna and The B-52s. Folk music was not yet a big part of her life.

“It’s funny growing up in a place renowned for some of the world’s best folk fiddle music that I wasn’t exposed to it,” she said. “But I was a latchkey kid in the suburbs of northwest Oklahoma City before the internet.”

Her first meaningful exposure to fiddle in a folk context came, fittingly enough, on the radio — only this time it was on a National Public Radio (NPR) affiliate in Colorado. She heard Cajun band BeauSoleil and was thunderstruck.

“A big light came on in my head,” she said. “I discovered fiddle in a whole new way after having taken a break from music for several years.”

A similar music-discovery process now fuels Casey and Minna, only now YouTube has replaced the radio. The couple uses a Roku media player to stream music from the site to their television. Casey and Minna primarily represents Cajun and Celtic styles, but through the band’s continual search for new music, it has also come to incorporate other European, Chinese and West African sounds.

Biggs said they also enjoy playing Christmas music and oldies, with some alternative and pop music blended in.

“Basically, it’s all our favorites interpreted and improvised in our own way,” she said. “We hope to create music everyone enjoys.”

No one can accuse Casey and Minna of being idle. The band has averaged around 17 shows a month in the last several months.

That is already a lot, but the duo said it is always looking for more gigs. In an ideal world, they would like to play around 25 shows per month.

The spaces the band can be seen in are varied. Casey and Minna plays art galleries, weddings, restaurants, senior living centers and nearly anywhere one can find live acoustic music.

Biggs said the band has written a number of original songs within the last few years and is currently looking around at studios where it can produce its first project.

“We’re really excited about it,” she said. “We’ve had these original songs for a long time, and it would be so great to record them.”

Still, the live performances are what have endeared Casey and Minna to many. Its fiddle folk is a fun, easy, feel-good listen that many different types of people can enjoy. Biggs said the most common feedback she hears about the music is that it’s “soothing.”

“If it makes them feel good, I’m happy with it,” she said. “Soothing people, it’s a nice thing.”

Because the family spends so much time out in the city, performing shows, they can’t help but feel especially rooted in the local music and Oklahoma City communities. Similarly, there are plenty of people who know the family as a city fixture.

“Often, we’re performing unplugged and off stage,” she said. “It feels personal, and people remember being face to face. Our community knows us just like they know their mail carrier or grocery store cashier. We’re their local family folk band.”

Print headline: Better together, Fiddle folk band Casey and Minna brings a soothing sound to the metro as a family.