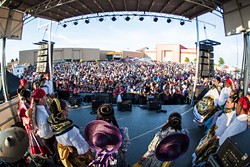 “The event will kick off … with the arrival of the cabalgata (horse parade) that will start that morning processing down Eastern and arriving at Plaza Mayor,” said Robert Ruiz, Scissortail Community Development Corporation president. “This representation of Mexican horse culture will feature groups of charros (costumed cowboys), tamborazos (musicians), rope artists and escaramuzas (horse teams) all in traditional attire.”

Food and drink, including low-point beer and margaritas, will be available for purchase, and kids attractions will be on-site. Lucha libre matches, Mexican-style masked wrestling from Mid-South Wrestling Alliance, happen between music performances.

“The community really sees this [event] as one of the first opportunities this year to come together and celebrate as a community after a tumultuous election season,” Ruiz said. “The theme of this year’s festival is unity.”

Organizing the Oklahoma City Cinco de Mayo Festival is especially poignant given OKC is a sister city of Puebla, Mexico.

While some confuse the holiday with Mexican Independence Day, which is Sept. 16, the May 5 holiday commemorates an 1862 victory by a vastly outnumbered Mexican army over French forces at the Battle of Puebla in the Franco-Mexican War.

The battle began at daybreak May 5 when 6,000 French troops descended upon Puebla de Los Angeles, which was defended by a poorly supplied force of 2,000 Mexican soldiers. It ended that evening with France withdrawing after losing 500 men compared to 100 Mexican casualties. Though not a major turning point in the war, it solidified Mexico’s resolve. In 1868, French forces withdrew from the war.

“Cinco de Mayo in the U.S. has mostly become a celebration similar to St. Patrick’s Day and is celebrated more widely here than in Mexico,” Ruiz said. “The only place there is a large celebration in Mexico is in Puebla. This is why we strive to maintain that connection and give people more context around the celebration and celebrate our sisterhood with Puebla here in OKC.”

His hope is to garner more supporters and turn Oklahoma City Cinco de Mayo into a multiday event, creating a cultural exchange with Puebla to bring its artists, dancers, chefs and musicians to OKC and provide Oklahomans a more authentic experience.

Plaza Mayor at the Crossroads