by Jennifer Chancellor and Greg Horton 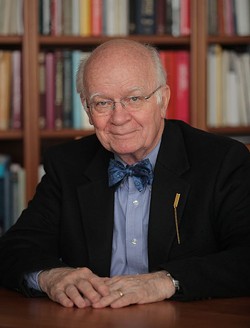 Marty has spent more than 60 years in ministry. He also is the Fairfax M. Cone Distinguished Service Professor Emeritus of the History of Modern Christianity at the University of Chicago Divinity School and has written hundreds of articles and more than 50 books.

At the event, Marty will receive the Bishop Floyd Schoenhals Distinguished Ecumenist Award, which is given to individuals “who have made an outstanding contribution to promoting and facilitating unity among the various Christian denominations and other religious traditions,” Tabbernee said.

He said that he knows of no other figure who is as articulate as Marty in “helping people from diverse religious backgrounds understand that their differences are not as important as the things they already hold in common.”

Marty said his keynote address, Ecumenical Difference Versus Spiritual Indifference, will include interfaith groups. In addition to its coalition of churches, OCC has interfaith partners, and an Interfaith Award will be given the night of the dinner.

For Marty, ecumenism — and by extension, the ecumenical movement — is an attempt to express “responsible diversity.”

“Christian ecumenism — there are other kinds — names the gift and effort of believers in diverse communities to relate to each other in prayer, thought and common action,” Marty said. “I am interested in ecumenism in which the various parties draw on the depth of their particular vision and share it, even as they listen to others. For me, the enemy to good Christian ecumenism can be summarized in an informal coinage: wishy-washy.”

Thursday, Adam Soltani, executive director of the Oklahoma chapter of the Council on American-Islamic Relations (CAIR), will receive the 2015 OCC Interfaith Award. Tabbernee called Soltani a “calming presence” in Oklahoma, especially in terms of the state’s “alarmingly hostile anti-Islamic environment.”

Soltani is chairman of OCC’s Religions United Committee and a former board member of Interfaith Alliance of Oklahoma. He said he joined CAIR three and a half years ago.

“OCC has really solidified what it means to live ‘interfaith,’” Soltani said. “When you live it, it becomes a part of you. The OCC has stood by the Muslim community in Oklahoma, even when it was difficult. They did not waver.”

Reservations are required for the dinner. Learn more and register at okchurches.org/annual-dinner.