Oklahoma Contemporary Arts Center’s decision to move from the state fairgrounds to downtown shows that it can embrace change.

Its children’s art education programs and adult art classes are meant to bring about change in the lives of the people who participate.

Its current space at the fairgrounds has many flexible spaces that morph into new configurations to meet the needs of the program or exhibition. Now, plans are underway to move from its flexible home at the fairgrounds to an even more flexible campus with two buildings, one of them new, at NW 11th Street and Broadway Avenue.

According to Donna Rinehart-Keever, Oklahoma Contemporary’s (OC) executive director, it will have 80 percent of its funds raised by late 2016, when it breaks ground on its new building as it remodels an existing one on the site.

The campaign to fund the building on the new campus is underway, with $13 million of the $26 million goal having been raised to date.

She gave an illustration of the reason its board decided to follow the suggestions of a 2011 study that recommended that they leave their current location and move close to downtown.

They have a make-and-take program once per month when parents and children can come to OC and make a piece of art. Normally, about 50 people participate. But recently, it tried hosting the same event at its new location, and according to Rinehart-Keever, about 350 people came. The difference was the location.

Organizers expect to have a larger impact on art education in Oklahoma City because of its new location once they move into the new spaces by 2018.

A warehouse that currently sits on the site that straddles NW 11th Street will be remodeled into a type of maker space that will allow for art education that is focused on pottery, painting, sculpting and 3-D computer-generated art.

The new building will have many flexible spaces both inside and outside that will allow for performances and exhibits of art that students have created.

According to architect Rand Elliott, the new building is meant to show that commitment to change has been a critical element in OC’s education success over the years.

Elliott was blunt about the degree to which change is at the core of the organization.

Elliott has been investing creative energy into the revival of Automobile Alley since 1995. That was when he bought an old, triangular-shaped building and turned it into the headquarters for his architectural firm, Elliott + Associates Architects.

Now, he is working on what will be a signature “gateway to downtown,” as he called it in a recent interview with Oklahoma Gazette.

Elliott is the architect for a campus that will be the new home of Oklahoma Contemporary Arts Center, centered on NW 11th Street between Campbell Memorial Park on Broadway Avenue and the railroad tracks, in 2018.

That gateway is a new building that will be the centerpiece of the 4.5-acre campus.

He calls the new building Folding Light because it is designed to reflect the changing angle of the prominent Oklahoma sun as it moves across the sky during each day.

Galvalume, a 55 percent aluminum-zinc alloy coated sheet steel, will play a large role in the variations of reflected light along with unique angles throughout the structure.

The existing warehouse close to the railroad tracks on the site will be refitted as a maker space that will be for creating pottery, painting, sculpting and other activities that create a lot of dirt and debris and require large doors to move supplies and finished art pieces in and out.

He referred to the activities of the maker space as being “the dirty arts” and the music, dance, performances and galleries in Folding Light as being “the clean arts.”

But there was another advantage in keeping the warehouse building.

“The thing that was so great was that there were economics in leaving this existing building, renovate it into a maker space and let it be the dirty arts. And then let [the new building] be the clean arts,” Elliott said.

Added accessibility for children and adults in OC by offering various art classes year-round is a key motive for moving. And Elliott was clear about the leadership that Christian Keesee, co-founder and board chair, has provided.

“Chris’ goal is to make art accessible for everyone, which has been an important point of view for this organization. And that’s very exciting, I think,” he said.

The exterior design of the new building is intended to serve more than just an aesthetic purpose.

There are five balconies designed into the exterior, one of which is 15-by-153 feet long, with a view to the outdoor performance spaces. 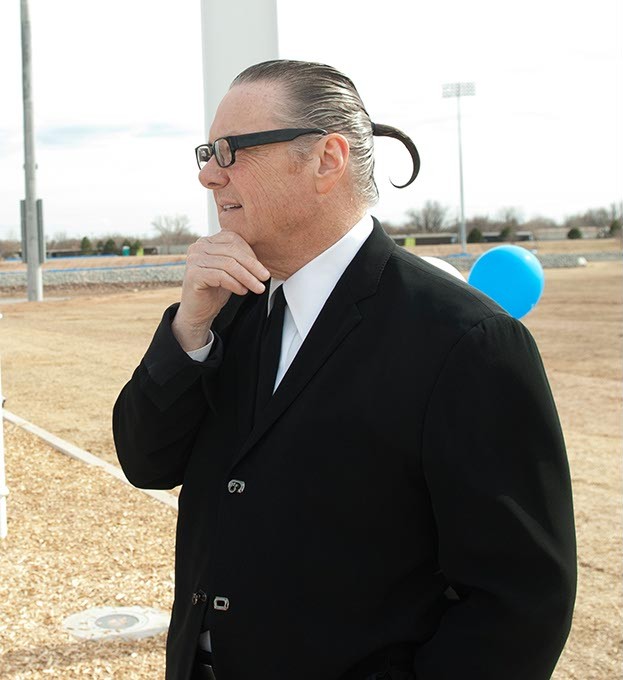 Elliott said that as Oklahoma experiences more and more 100-degree days, it is important to take into account the importance of shade. Rand has done that with the biggest balcony.

“It is on the eastern side of the building, and purposefully so,” he said. “If you spend any time in Oklahoma, you know that we have heat and wind. And so how do you handle heat and wind? You do it by shade and obstruction.”

That dynamic will unlock the flexible outdoor spaces even in the long, hot Oklahoma summers.

“The idea here is that if you want to come to Oklahoma Contemporary, there will be many opportunities for you to have an event in the evening. It’s on the east side of the building, so that building itself is the shade for the event,” Elliott said.

In the new building’s interior, flexibility of any space is the intent, even when it comes to the freight elevator.

The first floor will be mainly for classrooms, of which many are flexible for multiple types of use.

The balconies and the library are accessed through the second floor, which will be administrative space. The fourth floor will house additional administrative offices and mechanical equipment.

The third floor’s performance spaces will have two main theaters, the “black box”-type theater accommodating around 300 seats, and the dance theater, which will hold about 75 seats.

According to Elliott, both spaces will lend themselves to wide variations of arrangement in order to adapt to the needs of the particular performances.

“We’ve been very focused on trying to make the experience at every level, whatever you do, to be a very interesting kind of thing because that’s really what art is,” Elliott said. “You never know where art happens, how art exists. So it’s our goal to surround people and immerse them in spaces and experiences that maybe they never had before.”