Results from Oklahoma’s Nov. 6 elections reflect a divide between urban and rural counties. 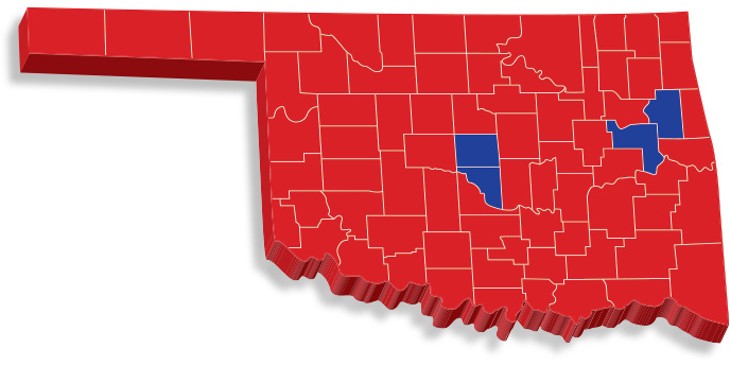 Results from Oklahoma’s Nov. 6 elections caused emotions to stir across a state that ushered in new governor Kevin Stitt and turned representation in Oklahoma’s 5th congressional district over to a Democrat for the first time in 43 years. Political scientists said election outcomes are indicative of changes that reach far beyond individual mind shifts.

“A common assumption is that if you’re a Democrat you’ll vote Democrat and if you’re a Republican you’ll vote Republican,” said University of Central Oklahoma political science department chair Louis Furmanski. “But until recently, that wasn’t really the case. While Oklahoma is a Republican state, we haven’t demonstrated this much attachment to our political parties for some time.”

Counties in the panhandle including Cimarron, Beaver and Ellis saw more than 79 percent of voters cast ballots for Kevin Stitt.

In casting their votes, Oklahomans created what political scientists call the doughnut hole effect, in which rural counties that sit on the outskirts of a state vote red and urban counties near the center of the state vote blue.

Since the 1930s, when rural dwellers began migrating to cities in large numbers with the hope of finding jobs outside an agricultural industry that was experiencing devastating losses due to droughts and the Dust Bowl, Furmanski said there has been a divide between rural communities, defined by the U.S. Census Bureau as those with populations less than 50,000, and their much more densely populated urban counterparts.

Oklahoma Education Association spokeswoman Carrie Coppernoll Jacobs said she believes a low cost of living could not be enough for rural teachers to disregard the need for school funding and increased teacher pay across the state or vote against Drew Edmondson, who stood for additional teacher pay raises and expanding pre-K to every school in the state.

While differences in educational policies might not have swayed rural voters one way or another, Oklahoma Cattlemen’s Association executive vice president Michael Kelsey said the differences between Stitt and Edmondson’s proposed agricultural policies were crucial in helping rural voters choose their candidate.

“Time and time again, I heard our members say that they couldn’t stand behind Edmondson because they didn’t feel like he valued them,” Kelsey said.

The fact that Edmondson was in favor of eliminating the capital gains tax deduction and he represented what Kelsey describes as an “aggressive animal rights group” while he was an attorney deterred many rural voters from voting for him Nov. 6.

According to Kelsey, the capital gains tax deduction is incredibly valuable for cattlemen and farming families across the state because they don’t invest in traditional employee retirement saving accounts like 401(k)s.

“A retired farmer might need to sell his land so he can afford medical treatment, or a young farmer might sell his cattle to make room for new additions,” Kelsey said. “The money that we gain from selling our capital and not having to pay taxes on the sale usually goes to the purchase of new farming equipment like a new tractor or we reinvest it in our livestock.”

In October, Rural Oklahoma Farmers and Ranchers Council announced its endorsement of Edmondson, who promised to create a Family Farmers Bill of Rights if elected governor. While Edmondson strived to assure Oklahoma’s farmers that the removal of the capital gains tax deduction would affect mostly wealthy companies situated in the state’s urban counties, Stitt ultimately got the rural vote.

In general, Furmanski said, Oklahoma’s voting trends reflected what was seen on the national level.

Oklahoma was one of only two states where all counties voted for Donald Trump in 2016’s presidential election. Those who voted Republican two years ago held tight to their party affiliation on Election Day in Oklahoma this year. Likewise, Furmanski said, those who identified as Democrats in 2016 did so again this year but were more vocal about their beliefs and desire to usher the party’s “blue wave” into the Sooner State.

While splashes of blue were seen, Oklahoma didn’t experience the wave Democrats hoped for beyond the election of Kendra Horn to represent Oklahoma’s 5th congressional district.

“That could happen someday,” Furmanski said, “but my guess is that it won’t be for a very long time.”

Voting trends are not stagnant, Furmanski said, and they are never as black and white as they seem.