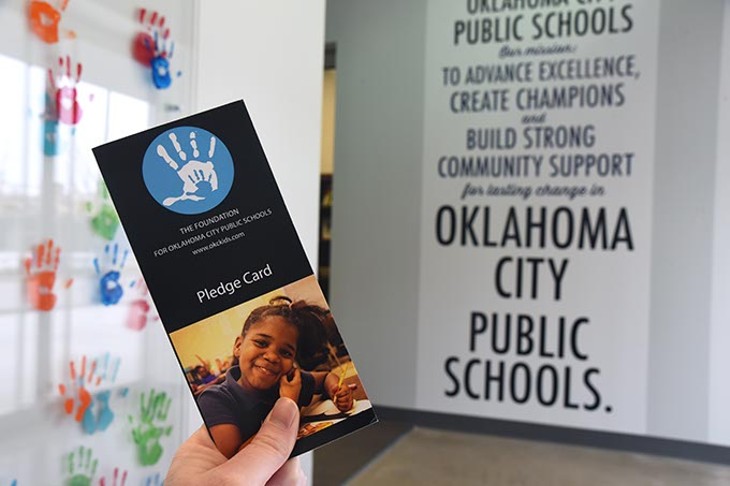 “If I had 15 seconds to talk to a legislator or someone from the governor’s office, what should the message be?” Cobb asked. “The students said [legislators] need to get in the schools and talk to students.”

“[Lawmakers] need to hear from parents and talk to students,” Cobb said. “Students ... can tell that story best.”

Oklahoma media consistently devotes headlines and airtime to issues such as teacher shortages, low pay, school performance and drops in funding. The coverage isn’t unwarranted. Crisis is a word used by many education leaders when describing school finances and the dwindling number of qualified teachers.

Catastrophe recently hit again when the State Department of Education learned it would take a mandatory 3-percent reduction, a $46.7 million funding cut. The midyear cut trickled down to schools across the state hit with adjustments from the state agency. The state’s largest school district, Oklahoma City Public Schools, faced a $1.5 million loss. Across town, the Mid-Del district was dealt $1.2- to $1.5-million in cuts.

“It’s the long-range planning that is the scariest,” Cobb said. “We just don’t know where we are going to be.”

About a week earlier, the personal income tax rate dropped from 5.25 percent to 5 percent thanks to legislation passed in 2014. The cut will deplete the state of an estimated $147 million during the next budget cycle.

The tax rate will likely have little impact on Oklahomans, but it severely impacts funding for government agencies. Proponents of the cut believe it will boost the state’s economy.

According to Oklahoma Policy Institute, the median household will receive $29 from the cut and two out of five households will be unaffected. The nonpartisan nonprofit posted a tax cut calculator on its website.

Rep. Jason Dunnington, D-Oklahoma City, was one of many to post about #GiveItBackOK on Twitter. He donated his cut to The Foundation for Oklahoma City Public Schools, which supports schools in his district.

“I have the utmost respect for those in our education community, but I hate that it is those outside of the building at 23rd and Lincoln (Capitol) that are having to lead on an issue as simple as funding education in Oklahoma,” said Dunnington, who was elected in 2014 and represents House District 88.

Traditionally, school district foundations assist schools in improving the quality of education through donations to the classroom.

Lori Dickinson, Edmond Public Schools Foundation executive director, said school foundations are very successful in bridging the gap between what teachers have and need in their classrooms. However, the role is increasing as districts receive fewer dollars from the state.

Since 2008, Edmond Public Schools has seen an increase of about 4,000 students. During that same time, funding was cut more than $4.5 million per year.

“There is a perception that Edmond is a wealthy community with a rich school district that has everything it needs,” Dickinson said. “That is simply not the case. The [community] passes bonds, but bonds don’t pay teachers or put books on the shelves.”

Last week, the foundation encouraged residents to donate the equivalent of their income tax cut to Edmond Public Schools through a tab on its website. Social media posts on Twitter and Facebook were well received and generated meaningful dialogue; however, Dickinson wondered if it will translate into donations.

At The Foundation for Oklahoma City Public Schools, staff encouraged people to visit DonorsChoose.org to find specific classroom projects to donate to. Dozens of different needs, which vary from technology to class supplies, are posted. The group matches donations.

“Cuts to education funding at a time when we are already dealing with teacher shortages and much lower than average per-student spending make the work of The Foundation for Oklahoma City Public Schools even more critical,” said Mary Mélon, president and CEO of the foundation, in an email statement.

David Blatt, executive director of Oklahoma Policy Institute, said it will take a variety of changes by state leaders before public schools and other state agencies begin to receive adequate funding. The state’s revenue failure and midyear cuts impact all state agencies.

“Now that we are facing the slump in the energy sector, it is easy and tempting to blame all our troubles on $30 oil,” Blatt said. “We have cut the income tax repetitively, and it has had a very large revenue impact on the state. Our inability to give pay raises to teachers, adequately staff correctional facilities and provide services to mental health [patients] is in part the result of policy decisions made by the Legislature.”

The policy group supports repealing the income tax cuts. For more than a decade, the state income tax has dipped. In 2004, the rate was 6.65 percent. The annual revenue loss from these cuts adds up to $1.022 billion, according to an analysis by The Institute on Taxation and Economic Policy sought by Oklahoma Policy Institute.

Jan. 19, Senate Finance Committee Chairman Mike Mazzei, R-Tulsa, filed Senate Bill 1073 to suspend the drop to the state income tax rate because of the revenue failure declared by state officials. The bill is one of many financial proposals lawmakers will discuss when returning to the Capitol on Monday.

“One of the hopes … is that folks will reconsider the short and long-term tax and policy mistakes made over the last 10 years,” Dunnington said. “The first way to clawing our way back is for people to recognize there have been some mistakes made.”

Back at Mid-Del schools, Cobb and other school leaders are not replenishing school and office supplies. This spring, when resignations and retirement notices arrive, Cobb predicts he won’t look to replace them.

Donations of $20 or $200 wouldn’t fix the funding shortage for a school district, but educators believe it’s a start and donations add up.

Print Headline: Deep cuts, Can a hashtag save education? No, but it might help stanch a midyear revenue failure.