From Homeric heroes to modern-day adventures, an odyssey typically signifies a period of testing and personal growth. Seven John Rex Charter Elementary School fourth-graders will prove their mettle in the upcoming Odyssey of the Mind 2017 World Finals, May 24-27 at Michigan State University.

Designed in 1978 as a competition that fuses elements from science and the arts, Odyssey of the Mind poses creative challenges to student teams around the world. The annual competitions include problems in vehicular, technical, classical, structural and performance-related fields.

John Rex formed an Odyssey team after fourth-grade teacher Wendi Liles — who participated in the program at a previous school — sent an invitation to parents and students, said Alicia Currin-Moore, a John Rex parent.

“This was the first year that we’ve ever participated in any type of competition in general and also in Odyssey of the Mind,” Currin-Moore said.

After an application process in which students wrote about their interests in creative problem-solving, they chose the Odd-a-Bot problem, a situation that required them to create a robot with human characteristics and then write about a family that receives the robot as a gift, Currin-Moore said.

“One of the overarching goals for the students is to learn how to work collaboratively as a team,” Currin-Moore said.

In October, the team began practicing two to three hours each school day, with additional practices on Saturdays. They created the robot, a set and props and costumes and wrote the script for their performance.

After progressing from a regional competition that featured OKC metro-area teams, John Rex advanced to the state competition in Owasso, receiving second place. Next, the team advances to the World Finals, which features two teams from each state as well as teams from countries like Japan and Poland. 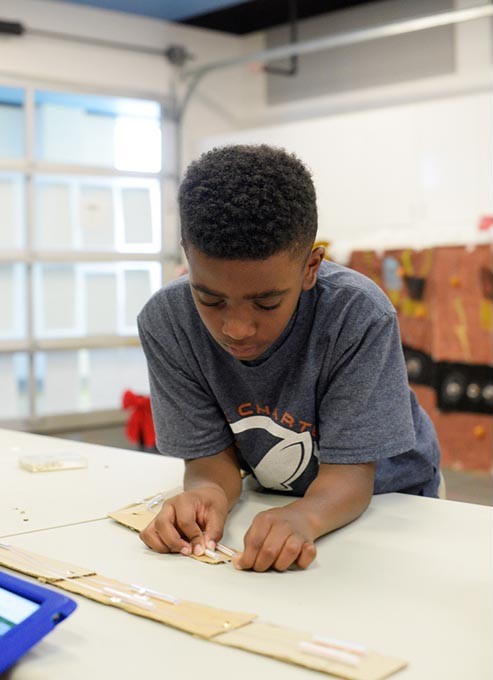 At the World Finals, teams also have the opportunity to enjoy international festivals. In order to cover travel costs, John Rex’s Odyssey team launched a GoFundMe campaign a few days after qualifying for the final competition.

The campaign, which ended April 28, raised $6,435 of its $10,000 goal from 81 donors. The students also worked as Sonic carhops and hosted an ice cream social and art auction at SixTwelve during the Paseo Arts District’s May 5 First Friday Gallery Walk.

“We are really excited and thrilled at the support that the community and the school have provided, and we’re excited for the next phase of the journey,” Currin-Moore said.

She said the Odyssey of the Mind competitions and practices provide students with unique opportunities for personal and collective growth. Because the team does not have a set captain, each of the members must know when to step forward into a leadership role, Currin-Moore said.

In order to determine the best course of action, the team also votes on the best idea in order to move forward.

The competition also helps team members exert independence in their problem-solving, communication and critical thinking skills without relying on adults. Currin-Moore said it was rewarding to see such a process boost the team members’ confidence.

“They make it happen,” Currin-Moore said. “They ask for the right supplies and tools, and they are able to create it from their imaginations.”