Western Avenue from NW 41st to NW 43rd streets will be closed for the free festival, which runs noon-10 p.m. Sept. 19. An after-party will follow at VZD’s Restaurant & Club, 4200 N. Western Ave.

“It was crazy. We polled everyone, and they all said the same thing,” Taylor said. “Patrons overwhelmingly said they wanted a big street festival.”

When organizers put out a call for musicians, they responded, too. More than 125 local and regional bands applied, and 19 were selected. Acts such as Deerpeople, Annie Oakley, Bowlsey, Gum and Softaware will perform on two outdoor stages. (Hear Oklahoma Gazette's WestFest playlist on Spotify.)

“Oklahoma is full of incredibly gifted musicians,” Taylor said. “It’s exciting to know how dedicated they are to the district and its success.”

Access to the beer garden, located in the parking lot next to The Barrel, requires a valid ID and paid admission, Taylor said.

Streetscape projects are underway from 41st to 45th streets along Western, so guests also will witness improvements.

“It’s a unique time to see the old and the new to get a feel for the amount of work that’s being done,” Taylor said.

The area is improving streets, sidewalks and lighting to make it more pedestrian-friendly.

“This festival is about creating fun and good times in the district specifically and in our city in general,” Taylor said.

Guestroom Records, The Tasting Room, Weldon Jack, Savory Spice Shop, All About Cha, The Wedge Pizzeria and The Garden Gnome Bonsai are within walking distance of the event. Crown Heights neighborhood just east of Western also is walkable and filled with historic homes and expansive parks. 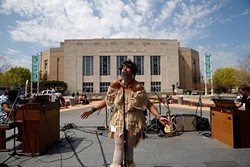 Founded by Brian Haas in 1994 while he was a music student at the University of Tulsa, Jacob Fred Jazz Odyssey has toured the globe, wrote an acclaimed album about the Tulsa Race Riot and recorded almost 30 albums.

“They’ve been amazing in their support of this festival,” Taylor said.

For decades, the group has played at Western Avenue venues such as VZD’s.

Its live sound is progressive and original and fuses sounds of free jazz, electronica, blues, pop, avant-garde, Americana and hints of swing, zydeco and punk into a sound it calls Red Dirt jazz.

JFJO’s WestFest gig coincides with the September release of its psychedelic comic book, The Battle for the Earth, which includes a download of a live concert the trio recorded late last year in Denver.

The band’s long trek through its experimental and evolving soundscape also means it has been everything from a nine-piece to a trio. It now includes core members Haas on piano, Fender Rhodes, bass and Moog; Chris Combs on lap steel, electric guitar and synthesizer; and Josh Raymer on drums.

Listen to JFJO on Spotify: