Oklahoma Gazette editorial staff rounded up some of their deadCenter Film Festival favorites for this year’s event, which runs Thursday through Sunday at venues across downtown Oklahoma City. 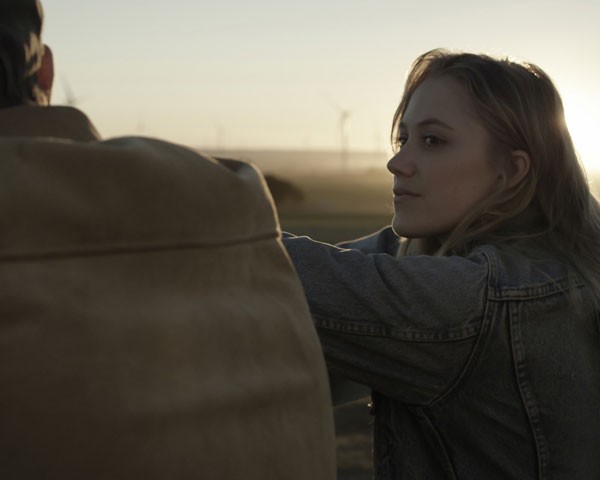 The Scent of Rain & Lightning

The Scent of Rain & Lightning begins with Jody Linder’s uncles and grandfathers telling her to come home to the farm. Billy, the man convicted of murdering her parents, has been released from prison.

Local filmmakers Casey Twenter and Jeff Robison, who wrote and produced Rudderless (directed by and starring William H. Macy), return to deadCenter Film Festival with their compelling, Western-tinged mystery The Scent of Rain & Lightning. Based on the 2010 novel of the same name by Nancy Pickard and directed by Blake Robbins, the story follows Jody (Maika Monroe), now in her mid-20s, as she returns home to face the unease and unhappiness that have long swirled inside her and the rumors that again sweep over the town like a squall line just before a thunderstorm.

There are hints about what it is to be a Linder: rugged, hard-working, blunt, driven and mired in tragedy. But hints are about all anyone gets. However, one thing does quickly become obvious: Jody pays attention.

About the time viewers think the whiplash-like back-and-forth between “back then” and now have blown the story’s otherwise taut narrative, they realize they’ve witnessed a powerful lightning flash as family secrets are illuminated.

Comedian Gilbert Gottfried’s trademark squawk has perhaps typecast him as Hollywood’s favorite bird. Though loved for his clean voice-over roles as Aladdin’s Iago, Cyberchase’s Didge or the Aflac duck, most are aware that Gottfried’s standup act is far from family-friendly.

2017 documentary Gilbert highlights many examples of the longtime comic’s political incorrectness and frequent use of graphic language while delivering punchlines. He is admired within industry circles as a comedian’s comedian. The Neil Berkley-directed documentary interviews a range of comedians who praise his comedic bravery, including Jim Gaffigan, Dave Attell, Bill Burr, Lewis Black and Whoopi Goldberg, among others.

This is the outward side of Gottfried that most already know. The value in Gilbert is that it cracks through the show-biz exterior and gives viewers a rare look at the highly private comic’s personal life. How many people know or even ever consider that Gottfried has a wife, two kids and two sisters he loves deeply? The comedian’s private self is a shy, sweet and reserved one far removed from his crude stage act. This dichotomy might best be represented in a scene that shows a 91-year-old Dick Van Dyke singing with a clearly blissful Gottfried on the comedian’s podcast, after which the comic thanks him with a crude remark.

Yet both sides are a part of what makes Gottfried whole. Gilbert tracks the several instances in which his humor crosses a societal line, in some cases threatening his career.

Berkley’s film is a tremendous and surprisingly tender documentary that will change the way Gottfried is seen by many. 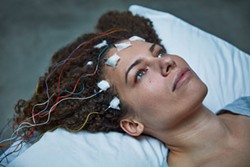 When journalist Jennifer Brea began to experience unexplained and inhuman pain, she turned on her camera.

Lying on a wooden floor, Brea’s breathing grows more rapid as she tries to push herself up. After falling, Brea crawls with a camera facing herself in one hand. A fatigued-looking young woman lands in bed before the film cuts to the next scene at a hospital.

Directed by Brea, Unrest is a documentary based on her own footage of her life as it unfolded during her diagnosis with myalgic encephalomyelitis (ME), commonly known as chronic fatigue syndrome. Tapping her journalistic abilities, she investigates the condition and its controversy. As Brea explains in the film, the condition and its symptoms affect a million Americans, leaving a quarter of them housebound or bedridden. This remarkable documentary explores ME but also captures the effects the debilitating condition has on those diagnosed with it and their families.

Bound to her bed by ME, Brea conducts interviews via internet and as her film team records the interviewee, which includes ME patients and their families, along with researchers and physicians. Brea gains insight into the condition and begins to build an online community amongst ME patients with each interview. The community fights back against their conditions and its critics with health equality rallies in major cities across the globe.

In the end, Unrest delivers a message of resilience.

One of deadCenter’s annual highlights is the Comedy Shorts program spotlighting hilarious and off-kilter short films that often have audiences gasping for air between laughs.

This year’s is strong with plots ranging from lowbrow fun like Death Metal to sad and surreal I’m in Here.

The Artist is the slowest build of the 11 films in the program and one of the shortest at just 2 minutes. Centered on an isolated writer who suffers for the reader, the film pokes fun at the pretentious myth of puffed-up novelists before puncturing it in the closing moments.

Absurdist Beach Day plays its low-budget cards to maximum effect. Actors and directors Matt Stryker and Dalton Allen use sound effects and razor-sharp comedic editing to tell the story of a fateful visit to a deadly foe: the “water.”

Some of the most consistent laughs come from UK short Help! I’m Trapped in a Movie, in which Tom wakes up to find his reality has become that of a film. This will play especially well for cinema enthusiasts, as the short delves into the idiosyncratic behaviors and cues that are second nature in movies.

Killing the Fiddler explores wedding-day jitters that are only compounded by family history, thanks to commentary from a wall full of dead relatives.

Death is a running theme throughout the shorts, including slapstick Death Metal, the profane family drama of Last Will & Testament, Inc. and substantial Death$ in a $mall Town.

$mall Town is particularly poignant in Oklahoma, where rural communities are fighting for survival. In this short, the mayor is keeping the town afloat with an unconventional strategy that might take him to the governor’s office. 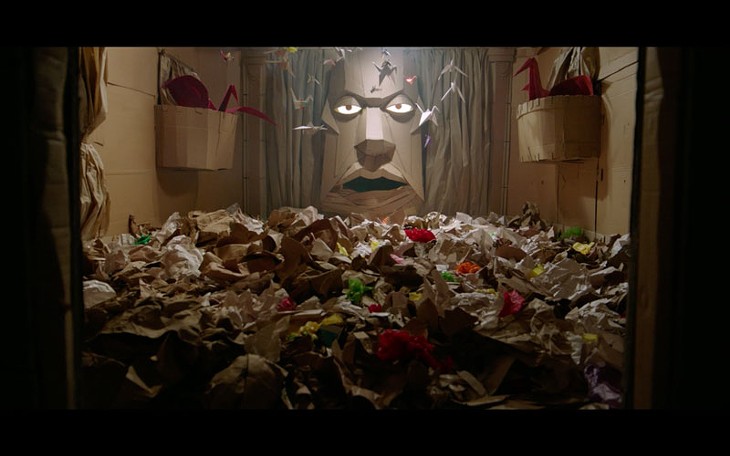 Dave Made a Maze

While his girlfriend is out of town, aimless 30-year-old Dave (Nick Thune) spends his time building a cardboard maze out of a refrigerator box. When Annie (Meera Rohit Kumbhani) gets home, she finds the maze, which leaks steam and strange noises, and begs Dave to come out and explain himself. The only problem is Dave is lost and won’t let Annie tear down the fort from the outside.

She resorts to calling his quirky best friend Gordon (Adam Busch) for backup. Though Dave tells him not to, Gordon calls in even more reinforcements, including their strange friend Leonard, a documentary film crew led by friend Harry, a loud woman who seems a bit too excited about the maze, a hipster couple, some tourists and a hobo with ulterior motives. Again, Dave begs everyone to stay out, but most go in to rescue him anyway.

The maze, which Gordon insists is actually a labyrinth, is bigger on the inside, takes on a life of its own and quickly reveals its dark nature, deploying fatal booby traps and unleashing animatronic paper animals and a flesh/cardboard minotaur in search of someone to eat. Pursued by the minotaur, the group makes its way through the strange, growing maze and, arguably, the dark recesses of Dave’s psyche and his angst about life at 30. They lose friends along the way, challenge their interpersonal skills and, ultimately, push Dave to finally emerge from the darkness and actually finish something. Whether a metaphor for depression or a commentary on our modern, failure-to-start lifestyles, Dave Made a Maze is an entertaining journey with a simple premise that works without hyper-technological special effects or a multitude of gimmicks: all we really need to accomplish anything is a vision and a really great group of friends.