Perhaps a sign of the times, 2015 was a year in which the biggest films were installments of much larger film franchises. But the year saw a fair share of great one-off ventures and a solid batch of captivating local films and documentaries. Here is a short list of some of the year’s most notable pictures and a look at what epics might come in 2016:

Max is back to saying little and doing much. In this chapter of the franchise, he encounters a village ruled by the tyrant Immortan Joe and his army of brainwashed youths. Max is then thrust into the heat of Joe’s crazed chase to bring home his most prized possessions: human “breeders.” Despite a big budget and effects beyond the capabilities of George Miller’s ’80s-era projects, Fury Road feels like it belongs in the Mad Max franchise and embodies everything the series ever wanted to be.

Last time we saw Matt Damon in a space suit, he definitely wasn’t this funny. In The Martian, Damon plays an astronaut who maintains a surprisingly cool head while marooned on the red planet. NASA, its scientists and the whole world watch as he survives and plans his return home. Based on a book by the same name, The Martian earned praise for being one of the most scientifically accurate space movies ever seen.

Sterlin Harjo returns with another Oklahoma-based movie. This one follows Mekko, a wayward Muscogee ex-con trying to settle in Tulsa after a long stay in prison. With nowhere else to go, the title character soon finds his way into an equally downtrodden group of homeless Native Americans. Mekko made its way through 2015’s Toronto International Film Festival and received favorable reviews from Variety and The Hollywood Reporter. Rod Rondeaux is particularly memorable in the lead role.

What happens when a satanic black mass takes place inside a public event space nestled in the heart of the Bible Belt? Chaos, of course. This documentary follows Adam Daniels as he prepares his ritual in Oklahoma City and deals with the resulting public backlash. The Real Enemy is both impartial and captivating. Candid interviews, particularly with Daniels, highlight the vigor that exists in religions of all kinds. The film can be viewed free on YouTube, so watch it and share with your friends.

After a bizarre and disastrous raid on a house in Arizona, by-the-book FBI agent Kate Macer is invited to join a special CIA team to take on a notorious cartel in Juarez, Mexico. Almost immediately, Kate finds that she’s being left in the dark about the mission’s greater goals. For sequences, Sicario is as intense as it gets. But the action doesn’t guide the film; the acting does. Emily Blunt and Benicio Del Toro shine in award-worthy roles.

Shot in Oklahoma, Skid depicts a long and tiresome trans-Atlantic flight in which the many colorful passengers have no choice but to get to know each other. Colorful characters include clashing pilots, an Oprah Winfrey superfan, a spy and others. Adapted from a book by Rene Gutteridge, the movie had its Oklahoma premiere at 2015’s deadCENTER Film Festival. The project touches a wide range of moods and emotions during its 92-minute runtime. 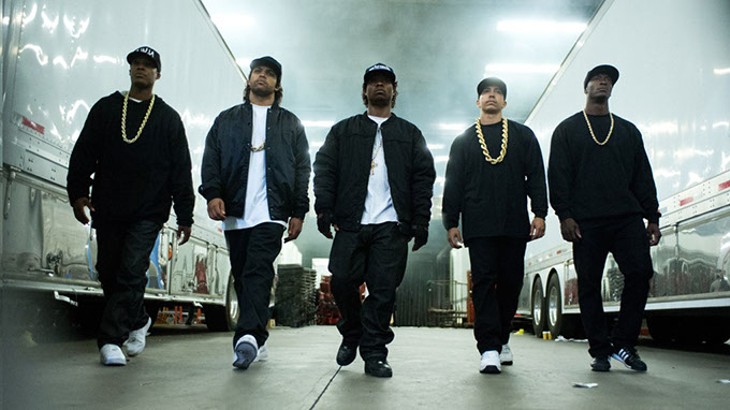 In 1980s Los Angeles, a group of hungry, young visionaries assembled the rap group that grabbed America by the throat. However, money and outside pressures doomed the group. Despite hostile feuds, the group got back together just as things turned bleak. Even if Straight Outta Compton does not separate itself much from a typical, one-sided band biopic, it is beautifully shot in spots and is a welcome trip down memory lane for fans of classic hip-hop.

Big names will do big things in the next 12 months. As the year before it, 2016 promises blockbusting updates to some of our favorite film franchises. Here are three movies we hope to see on the big screen:

One of the wonderful things about classic movies is that they are part of shared childhood experiences between generations. Disney released its animated version of The Jungle Book in 1967, so it’s likely parents and children alike will want to see the live-action version, due out in spring. It is stacked with names like Scarlett Johansson, Bill Murray, Ben Kingsley, Lupita Nyong’o, Idris Elba and Christopher Walken.

Marvel has reigned supreme in the comic movie world the last couple of years, but will 2016 be DC’s year? There’s certainly potential. With its Avengers titles, Marvel has shown that it can successfully juggle multi-hero flicks. DC attempts to do the same with Batman v Superman: Dawn of Justice and the more villainous Suicide Squad. As early predictions say a mashup between the world’s two most popular heroes might be too big not to disappoint, the return of the Joker interpreted by Jared Leto could be a fan’s best bet.

The movie is based on the story of Dr. Kermit Gosnell, a former abortionist sentenced to life in prison after performing a string of late-term procedures. Gosnell was filmed in Guthrie, and its subject matter is likely to spark some controversy somewhere, especially considering the involvement of right-wing filmmaker John Sullivan. Dean Cain, known as the most recent host of Ripley’s Believe It or Not!, plays the lead role as the detective who eventually busts the doctor.