Purple Tangie Cannabis Co. has taken home prizes in both High Times Cannabis Cup and Cowboy Cup during its first year in business. 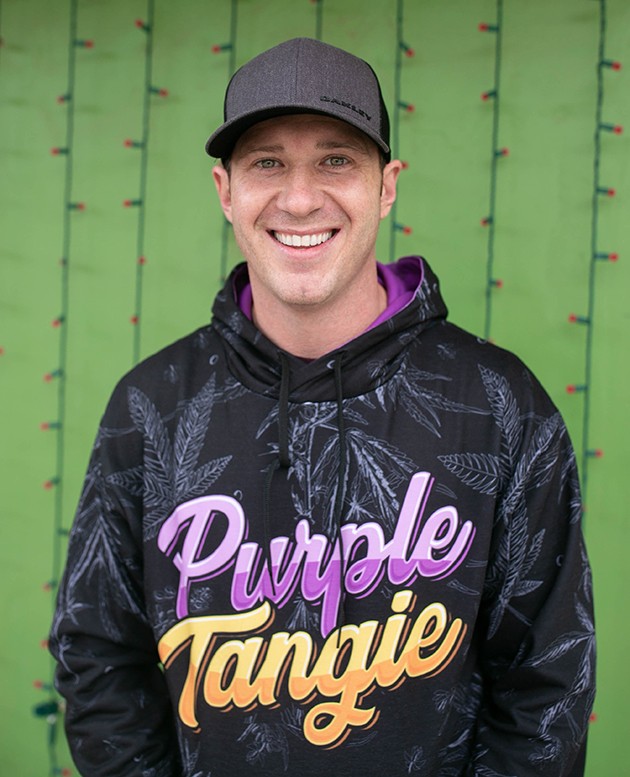 When he took the stage at Cowboy Cup to accept the back-to-back awards for best indoor flower and grand champion flower, he did not do so as Jeremy Jones but as Jeremy Purple Tangie.

Jones is the owner and public face of Purple Tangie. While he is not the only employee, being the public face of the company is part of his job and the moniker, first used on Facebook, is now how people commonly refer to him.

“I guess you expect to win, but I didn’t go out and plan a speech for it. I expect to win, but you didn’t you don’t think that you’re really going to out of this many contestants, but then I won and I had my platform to share, but I really didn’t,” Jones said. “Just on a personal note, I’ve always been that person, like people feel that I’m real confident, maybe even cocky sometimes, but I’m not the person that’s ever, like, wanted attention. … I didn’t set out to become Jeremy Purple Tangie. Purple Tangie is the name of our company. We have a strain behind it, and it was like, I’m Jeremy and then the company’s Purple Tangie. We needed an outlet to be able to send friend requests and you can’t do it with a like page, and then boom, I become Jeremy Purple Tangie. I’m okay with that. I like the positive attention that we’re getting.”

Cannabis has been one of Jones’s passions since he was a teen.

“It’s all about the team and a collective
of bringing those unique results.”
—Jeremy Jones tweet this

“My relationship with cannabis probably started when I was 2 to 3 years old and I wondered what was that smell coming out from the door of my dad’s bedroom,” Jones said.

“When I tried weed, there was something about it that connected with me, and I needed it from then on and I’ve been a daily smoker every day of my life since nearly 15, so yeah, I battled with it, that, ‘Oh, am I a drug addict?’ 15, 20 years ago because of the scenario that we were in then. ‘Am I this bad person?’ I knew how good it made me feel, and I knew how it inspired me. … I’m very passionate about this product,” he said. “I love this product, and I want people to have the best cannabis and I want them to have really affordable access and I’ve been doing this more than half of my life.”

Jones was born and raised in Eufaula, and that is where his companies are based now. He planted his first seed when he was a teen, but cultivation was never his passion.

“Being from southeast Oklahoma, we really have great conditions for cannabis cultivation, so what I found is you can plant a seed in the right area and a lot of years, it would really take care of itself a lot of times. Certainly not every year, but we have the conditions for the right cannabis genetics to truly thrive and sustain on their own, so pretty much the shit can grow wild,” he said.

Purple Tangie is the opposite of seeds thrown into the ground, with a carefully cultivated product and image.

“The results that you see, it’s not the results of myself. It’s the team that I surrounded myself with and then was blessed to be part of building,” Jones said. “So it’s really a team effort. … Basically, when we came together and we formed the team, we had brought people on the other experience that had been on other teams that, you know, had those achievements. As far as an award, a High Times Cannabis Cup award, Oklahoma, that was my first one to be a part of.”

While Jones is the public face of the company, he has partnered with longtime friend and associate Brad Williams.

“We actually shared this mutual interest from the time we were about 18 or 19 years old, and so we actually kind of knew each other through that,” Jones said. “And so with his abilities on SEO, website design, graphic design and stuff like that, we’re kind of the opposites of the spectrum, and I knew that, ‘Man, I want this guy on the team. I need him on the team.’ I wanted him putting something together bigger than myself, so I am the owner of the company, but Brad, he plays a crucial role and I just see him like a partner.”

There are about 10 other employees in the company, but the lead grower who cultivated the award-winning crops this season, Kirk Laminack, just left the company to start a family.

“He got a master’s degree from Texas A&M. He grew exotic plants from all over the world for about four years, then he came in and assisted, really led it, for about eight months,” Jones said.

Purple Tangie, the public-facing company, and Green Rush Gardens, the growing arm of the operation, are just two of the projects in the works. Jones is currently at work building a much larger concept under the name Pharmicated Collective.

“I want to do something way bigger than me. I want to do something bigger than myself,” Jones said, “and so when I really started with this, I embarked on bringing people together that were better than me, that had their gifts, that really complemented my gift and trying to bring the right people together to get the right results and then make sure that we’re able to provide them with the right tools that they need for success. … It’s all about the team and a collective of bringing those unique results.”

Purple Tangie takes great pride in taking top honors at Oklahoma competitions because this state is and will always be home to Jones.

“We have a purpose. We’re real folks. We’re normal people, everyday people, and we’re here in this. Yes, we want to be wildly profitable and successful. There’s nothing wrong with that, but we want to do it in a way that’s right, that’s sustainable and that’s beneficial for the state,” he said. “I don’t want to see a guy come in here and get a partnership and then he’s yanking all the fucking profits out of that company and sending it back to California or back to Chicago, back to Florida. I want to see the business here stay here. I want to make money so that I can reinvest it in this state. I want Oklahomans for Oklahoma.”