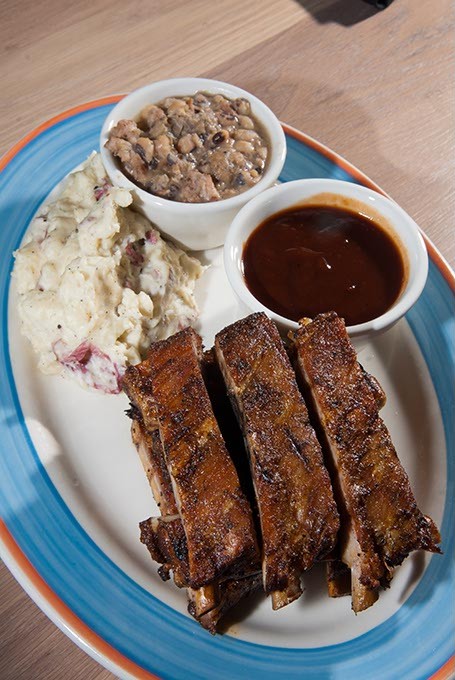 In the 1800s, pork and corn were staple foods on the frontier. Native American staples included corn, squash and black-eyed peas, a variety of cowpea. Okra has possible African origins and is believed to have been brought over by 17th-century slaves. These and other foods reflect the culinary mélange over time in the American South.

The list of much-adored dishes comprising the state meal is what tugs at the heartstrings of Oklahomans and their appetites.

The Tuesday and Sunday specials menu at The Boulevard Cafeteria, 525 NW 11th St., offer a hearty chicken-fried steak with buttered potatoes and gravy ($8.80). It’s served from a serving line — cafeteria-style — and you can pair it with buttered sweet corn. Everyday items include green beans, Harvard beets, glazed carrots and buttered spinach. This family-run restaurant has been in business since 1947 and has a menu that reads like a grocery list for grandma’s Sunday dinners, and its menu items are prepared fresh daily.

Its signature dessert, the pecan pie, is dense and sweet in a melt-in-your-mouth pie crust. Whole pies also can be ordered in advance for special occasions.

The steak, generously cloaked in peppery, breaded comfort, comes with lettuce, tomatoes and french fries on the side. And as a topping, expect gravy. Depending on the day of the week, there can be up to 47 varieties available, from sausage to veggie jalapeño bacon. (An additional small side of gravy is only $1.29 if you can’t make up your mind.) And lunch specials include dessert.

To honor part of the official state meal at breakfast, order the Good Gravy! ($9.99). This is a hearty start to your day: large biscuits covered with gravy, sausage, hash browns and two eggs. Some days, it’s just all about gravy. You just have to accept it.

Finding the most state meal dishes at one place is a slam-dunk at Kd’s Southern Cuisine, 224 Johnny Bench Drive.

It was launched by the Oklahoma City Thunder’s Kevin Durant just last year, and the variety translates to a lot of wonderful state food right in Bricktown.

The well-seasoned half-rack of barbecue pork ribs ($15) are served stacked in three layers, coated in barbecue sauce and so tender that meat falls off the bones. The entrée comes with mashed red potatoes with garlic and smoked black-eyed peas. The black-eyed peas were cooked to perfection, not mushy, with just enough texture. And it doesn’t have to be New Year’s Day to enjoy them.

Most other sides at Kd’s, including fried okra, seasonal roasted vegetables, sidewinder fries, macaroni and cheese, collard greens, coleslaw, green beans with bacon, waffle and red beans and rice, are $5. For $1 more, you can order organic Texas grits, crispy cauliflower or a traditional Caesar or house salad. Breads include buttermilk biscuits for $5 and chipotle cornbread in a cast-iron skillet for $6. (And we all agree that if you’re having an Okie-centric meal, the cornbread should always come in a cast-iron skillet.)

print headline: Eat your (official) dinner, Oklahoma has its own beloved state meal. You know you want it. Here’s where to find it.