There are a few names that frequently pop up in the common debate over who is the greatest rapper of all-time: Tupac Shakur, The Notorious B.I.G., Rakim, Nas, Jay-Z, Eminem.

Gregory Jerome, a rapper and community activist originating in Oklahoma City, said there is one name frequently left out of the discussion that shouldn’t be: The Roots’ vocalist Black Thought.

“You’re not catching too many emcees out here who are recording an album with a live band,” Jerome said. “Now, you might see them performing with one every now and then, but to put out album after album, 20 years plus? Come on, man.”

Black Thought, whose birth name is Tariq Trotter, is the verbose lyrical wordsmith behind the Philadelphia-formed hip-hop band most known for its Afro-sporting drummer Questlove and its residency as the house band for host Jimmy Fallon on The Tonight Show.

Jerome, now based in California, is also founder of Oklahoma Hip-Hop Festival, an event he said is taking a one-year regrouping hiatus after two initial years. In its absence, he is throwing a one-off tribute to The Roots called The Next Movement: A Tribute to the Legendary Roots Crew. The event is 6-10 p.m. Nov. 5 at Venu Lounge, 224 E. Main St. Tickets are $10-$25.

Contrary to some of the city’s more casual hip-hop events, Jerome wants The Next Movement to be a night of mature sophistication and called it a “black carpet event.”

Music from The Roots will be playing all night long. Oklahoma City jazz and hip-hop group Culture Cinematic, with a few added members, will act as the event’s house band. Headlining the tribute is Brooke Taylor, a Los Angeles-based neo soul artist who has appeared on The Steve Harvey Morning Show and collaborated with Murs and other hip-hop artists.

Jerome said the musical diversity found in the jazz- and soul-influenced Roots will be present in the night’s lineup. That same diversity The Roots are known for is also part of the reason Jerome has Black Thought in his list of top five emcees.

“He can even sing hooks that are soulful hooks,” he said. “It’s not a Drake hook — it’s soulful.”

In an era when even some of hip-hop’s best and most popular music is produced entirely on a computer, Jerome said The Roots has always stood out for its use of a full band.

“You can’t even compare it,” he said. “You can have Timbaland, you can have No I.D., you can even bring in 9th Wonder on production, but once you put live instrumentation to hip-hop, it changes the whole dynamic. You can’t beat it.”

Jerome first thought of holding a Roots tribute show not only to honor the group’s impact on hip-hop as a whole, but also as a personal thank-you to an act that has meant so much to him and his career.

Tribute shows like this are common throughout the country but are usually reserved for bands that are dead or disbanded.

“I wanted to pay homage to them — give them flowers while they’re still here,” Jerome said. “Instead of waiting till everything is over and done with, I wanted to pay tribute to these guys for being so influential to me and to hip-hop itself.” 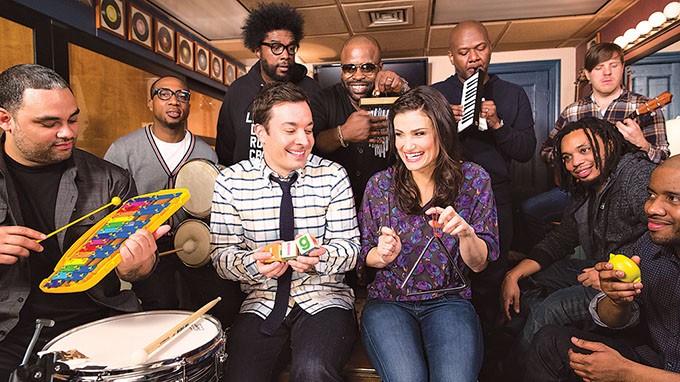 Though known by a wider audience for their appearances on television, The Roots are known within hip-hop and music circles for poetic, jazzy and soulful hip-hop albums like 1996’s Illadelph Halflife, ’99’s Things Fall Apart, and 2011’s Undun, as well as collaborative records with John Legend and Elvis Costello. In addition to producing most of his own band’s music, Questlove has also worked as a producer for artists like D’Angelo, Al Green, Erykah Badu and Common.

Jerome was in college in 2005 at Middle Tennessee State University, studying the music industry and launching his rap career, when he was asked to open for The Roots in Memphis. It was a night he said would go on to shape how he approached the rest of his music career.

“Being able to call Black Thought just Black, like ‘Yo, Black, what up?!’’ and he pounds you up?” Jerome said, reminiscing. “I gave him my album — my solo project. That was a moment I’ll never forget, to shake hands with this dude and give him my album personally while I’m still in college.”

Part of The Roots’ legacy will forever be its work as an ambassador for hip-hop. With a regularly scheduled appearance on network television, no rap group has ever been more visible. The band’s sophisticated sound helps break down misconceptions people outside of the genre have for hip-hop.

Jerome said one reason for The Next Movement is to break down more barriers and give fans a night of mature hip-hop indulgence.

“I was like, ‘Let’s give Oklahoma an experience. Let’s give them something they’ve never experienced before,’” he said.

Jerome might not have been able to host a full version of the Oklahoma Hip-Hop Festival this year, but he is confident the event will return soon.

The festival originally got its start to help fund Jerome’s nonprofit educational hip-hop program Elemental Hip-Hop, which helps teach art to students through hip-hop culture. Jerome said bringing a regular, successful hip-hop festival to OKC would also be a major boost for the area. Because there are no other pure hip-hop festivals in the region, he believes it is an event to which interested people in surrounding states would flock.

“This is a huge opportunity for Oklahoma City as a whole,” he said. “Not only socially, but economically.”

Since beginning the mission to bring such an event to life, Jerome said he has been learning what works and what does not. “It’s like a little baby,” he said. “You’ve got to crawl before you can walk, and then you fall down and bump your head or whatever the case may be. But as long as you continue to grow, it continues to get better.”

Print headline: Living legends, Oklahoma Hip-Hop Festival hosts a tribute to The Roots as the annual event regroups for the future.

The Next Movement: A Tribute to the Legendary Roots Crew