Oklahoma is using a federal grant to study apprenticeship programs 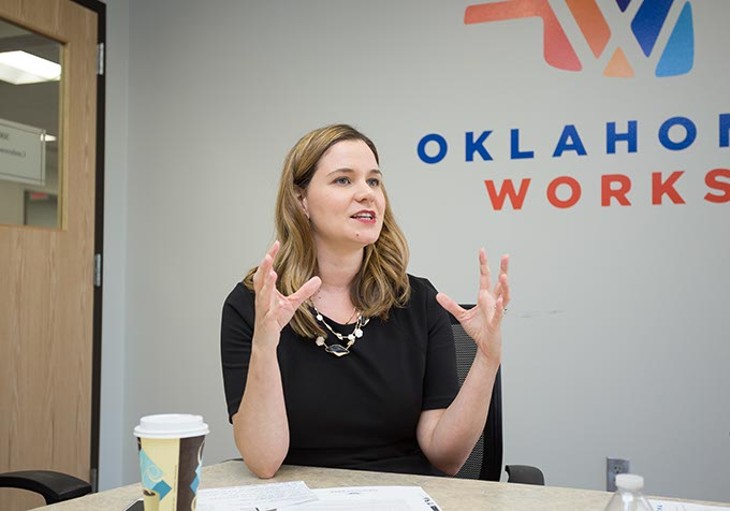 One hundred occupations are identified as “critical” to Oklahoma’s future, according to Oklahoma’s Office of Economic and Workforce Policy.

Forty-one of those 100 jobs require associate degrees or higher to attain.

Fifty-nine others can be attained through vocational, career tech and on-the-job training, shows the office’s study Oklahoma’s Ecosystems: Accelerating the Growth of the State’s Economic Prosperity. In fact, 48 of those 59 occupations can be filled by some form of on-the-job training.

That’s where Erin Risley-Baird, executive director of Oklahoma’s Office of Workforce Development, enters the process. The office is part of a larger Oklahoma Works initiative launched several years ago by Gov. Mary Fallin.

Oklahoma Works is a coalition of state agencies, businesses, training schools and other groups that connects job-seekers, employers and employees with available training, information and programs. In short, the initiative facilitates earning and employment opportunities between job-seekers and businesses.

“Our hope is that we can identify specific apprenticeships to expand,” Risley-Baird said. “We want [to find] new avenues that we could explore for creating a new apprenticeship opportunity that fits in with the industry that we have in Oklahoma.”

She said the goal is to help train people while they’re employed while aiding Oklahoma employers as they expand their skilled workforces.

“It’s not just for getting them in the door,” she said, “but getting them the skills they need and then getting them to be loyal and have that professional development opportunity.”

The funds are from the first round of U.S. Department of Labor grants awarded as part of its ApprenticeshipUSA program, which promotes apprentice training.

“There’s a big push by the [U.S. Department of Labor] under the Obama administration to get apprenticeships out there,” Risley-Baird said. “They’re putting a lot of money where their mouth is. It’s definitely in tune with what we are trying to do in Oklahoma.”

In 2016, U.S. Department of Labor committed $90 million with the goal to “double and diversify” apprenticeships by 2018. Of those funds, $60 million is committed to state initiatives developed with accelerator grants, like the one Oklahoma received. The other $30 million will be awarded to industry partners to diversify U.S. apprenticeship programs.

The U.S. Department of Labor identified 1,800 jobs as being of a sort that can be entered by those who undergo an apprenticeship rather than classroom training outside the workplace.

“All of the numbers are telling us that we will get nowhere unless we can get people more educated,” Risley-Baird said. “And by educated I mean credentialed in some way.”

She said with the state’s unemployment rate steadily rising, especially after oil prices fell, there is a large need to give more people a new avenue into the workforce.

Risely-Baird’s office is now developing a plan it hopes will allow the state to win a larger U.S. Department of Labor implementation grant.