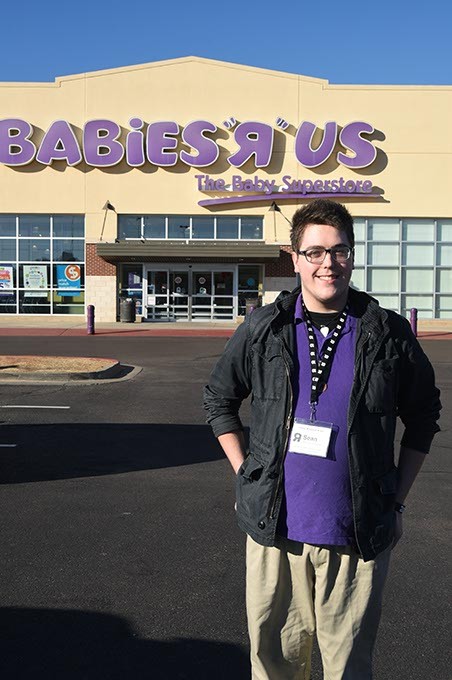 Sean Rowe has been told he cannot wear a jacket while working the cash register near the front door at Babies “R” Us, despite having a doctor’s note recommending one. And when he asked to be provided with a long-sleeve shirt that fits with company dress code, his manager said state law did not require her to provide one.

That exchange, which was recorded on Rowe’s phone last month, is an example of the lack of employee protections and benefits that exist in Oklahoma when compared to other states, especially after the Legislature overhauled the state’s discrimination and worker rights laws a few years ago.

State law does not require employers to offer lunch breaks, while states like California and Colorado require lunch breaks of 30 minutes for shifts longer than five hours. Oklahoma also lacks overtime laws beyond the federal Fair Labor Standards Act (FLSA), while states like Missouri and Arkansas require overtime pay for employees who work more than 40 hours a week at businesses not covered by FLSA.

Oklahoma also is one of 14 states that default to the federal minimum wage of $7.25, choosing not to implement a higher minimum wage.

The 2011 law also dissolved the Oklahoma Human Rights Commission and also requires employees to file a complaint with the state within 180 days from the last date of alleged employment discrimination. The time frame was previously 300 days.

Rowe, 22, said his job at Babies “R” Us became almost unbearable after he sent an email to management and the corporate office last month listing several workplace concerns, many of which can be hard to find legal protection from in Oklahoma.

“I don’t know what else to do,” Rowe said after describing what he feels is a pattern of abuse that he has documented in emails and secret phone recordings.

Rowe feels bullied at work for no other reason than he complained about his manager, and he believes his manager is seeking retribution.

“Unfortunately, there is a lot of bullying in the workplace that is not unlawful,” said Amber Hurst, an attorney with OKC firm Hammons, Gowens, Hurst & Associates. “I call it being an equal opportunity jerk.”

Hurst, who also is president of the Oklahoma Employment Lawyers Association, said there are laws to protect employees from specific forms of discrimination on the basis of race, gender or religion. But a case of an employer retaliating because a complaint was made can be harder to defend.

“There are a lot of employers who will try to bully an employee because they don’t want to fire them,” said Hurst, who has not examined Rowe’s case.

Oklahoma requires unemployment compensation benefits when employment is terminated under qualifying conditions, which is why it can be cheaper for an employer to have an unwanted employee resign.

Since sending the letter to management, Rowe feels that his store supervisors target him for minor infractions and call him into a back office numerous times during shifts, demanding that he sign papers that accuse him of breaking company policy.

When Rowe took his concerns to an attorney, prior to sending his letter to managment, he was told there wasn’t much to stand on. Not only did he lack any evidence of discrimination on the basis of race, gender or religion, but Rowe’s options would be reduced even further if he chose to quit.

“I don’t think they want to fire me,” Rowe said. “They are trying to get me to quit.”

Following the complaint letter, Rowe said the store manager, Pankievich, demanded that he no longer wear his jacket and was told to leave work. After obtaining a doctor’s note saying a jacket would be good for him because of asthma-like symptoms, Pankievich said, “It makes no difference,” according to a recording Rowe played for Oklahoma Gazette. She also allegedly told Rowe he was suspended pending investigation. After a few days of suspension, he was asked to come back to work.

Rowe’s recorded conversations played for Oklahoma Gazette also show that a week later, he was confronted by a store manager and a corporate human resources manager who accused him of sexual harassment and cursing around customers. Rowe denied the allegations, and even though management said it had proof, he wasn’t fired.

“I have watched them bully Sean,” said Sadie Elliott, who has worked at Babies “R” Us since September. “I have had my own issues with management.”

Elliott, who suffers from myotonic muscular dystrophy, said she found her job with help of the Dale Rogers Training Center. She claims she was told that she could work at a desk because standing for long periods of time is not good for her.

“Standing makes me very weak, at times, but [my manager] doesn’t want me sitting at a desk, which is what I was hired to do,” Elliott said. “She has put me at the register for long periods of time, and I lean on the counter when I don’t have customers. Then she snaps at me and says we are not supposed to do that. It’s to a point where I don’t enjoy going to work anymore.”

Rowe’s allegations were submitted to the store’s corporate media relations office for comment.

Rowe and Elliott’s situations are examples of workplace abuses that can be hard to identify through current workplace laws. At best, Rowe’s recordings demonstrate a pattern of disrespectful behavior.

Following a Supreme Court ruling last year that upheld the OADA changes, supporters of the verdict said it kept in place important protections for employers.

“The old anti-discrimination act had some guts to it,” Hurst said. “The new act doesn’t offer much for employees, and protections were already few to begin with when you compare us to other states.”

Print headline: Protecting employees, Some workers feel that both a revision of the OADA and a lack of substantial state labor laws encourage unfair and discriminatory workplace practices.