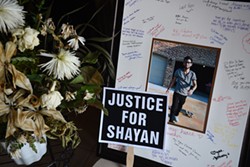 Shayan Mazroei was wise beyond his years, a quality Mandi Legaard first noticed when mutual friends in Edmond introduced them four years ago. Mazroei was devoted to his brood, possessed a strong work ethic and helped his family start and build a successful used car dealership. He wasn’t outgoing, but he was kind and friendly in a way that made strangers feel comfortable.

That was how the young Iranian-American, a graduate of Deer Creek High School, made new friends at Patsy’s Irish Pub in Laguna Niguel, California, an affluent community located between Los Angeles and San Diego. About two years ago, as a new resident of that state, Mazroei stumbled upon the neighborhood bar and, after his first visit, began shooting billiards. He dropped in every week to play pool and hang out with friends. It was a ritual Legaard joined when she visited him.

“We would eat dinner, and I would watch him play pool,” said Legaard, who traveled to southern California six times a year to visit Mazroei. “It is a well-known place for locals to go. I always felt safe there.”

Laguna Niguel neighbors Irvine, which was named the safest city in America in 2013 and 2014, according to FBI violent-crime statistics. Southern California is a diverse community, one many Iranian-Americans call home — more than 100,000 live in the greater Los Angeles area.

Legaard believes Mazroei, 22, never feared for his life at his favorite local spot, despite a recent spark in prejudice against Iranian-Americans in reaction to the Joint Comprehensive Plan of Action, otherwise known as the Iranian nuclear deal.

Like most Americans over Labor Day weekend, Mazroei savored his time away from work and his studies at Saddleback College’s engineering program. He went to Patsy’s to shoot pool. As he left, he was fatally stabbed just outside the pub’s doors.

The Orange County Sheriff’s Department caught the suspect days later at a motel. Craig Tanber is a documented white supremacy gang member and a convicted murderer who was recently released on parole. One of his tattoos peeks above his collar line and reads PEN1, short for Public Enemy Number One, described as a “hybrid racist skinhead street group and prison gang” by Southern Poverty Law Center.

Before the stabbing, Tanber and his girlfriend, Elizabeth Thornberg, were unruly customers of Patsy’s. Thornberg allegedly called Mazroei a “terrorist” and shared her dislike of Iranian-Americans openly to other customers, according to witnesses interviewed by media.

Orange County prosecutors charged the accused 37-year-old with murder, but not with a hate crime, which fueled outrage by Legaard and the victim’s relatives. Iranian-American groups, members of the southern California community and many with access to the Internet insist that the act was a hate crime based on Tanber’s documented gang membership and criminal history. An online petition on Change.org that demands the Orange County District Attorney’s office press hate crime charges and investigate Thornberg as a co-conspirator has more than 6,300 signatures.

“It hits home for people, especially those that have kids Shayan’s age,” said Legaard when discussing the support. “Many people are taking it personal.”

Oct. 2, Tanber entered a not guilty plea to the murder charge and now awaits his December court date in a detention facility.

Orange County prosecutors do believe Tanber and Mazroei exchanged comments at the bar but Mazroei’s ethnicity had little, if anything, to do with the attack that followed.

“It’s not even close to [having] enough evidence to charge it as a hate crime,” Senior Deputy District Attorney Larry Yellin told ABC affiliate KABC. 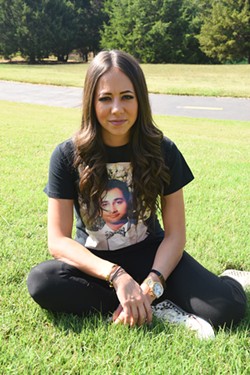 Family-hired attorney Neama Rahmani believes otherwise and is collecting witness statements and other evidence to prove a hate crime was committed.

“Our clients lost their only child to a heinous act of racism and violence,” Rahmani said. “We will not rest until we obtain justice against those responsible.”

The National Iranian American Council also advocates for the Orange County District Attorney’s Office to “acknowledge the racial motive in the case.” The council, along with several civil rights, faith and advocacy groups, submitted a letter to the U.S. Department of Justice to open a federal hate crime investigation.

“The tragic incident reflects the broader problem of bigotry and racism in our country and highlights the rise of discrimination and hate crimes against people of Middle Eastern descent,” said Elham Khatami, the council’s national outreach director, in a press statement.

Oklahoma City became Mazroei’s home when he was 6 years old, after his family emigrated from Iran. Mazroei and his parents lived here for 14 years before moving to California to start their business.

“UIASO expresses its deepest condolences and sorrow to the family and friends of Shayan Mazroei,” UIASO wrote in a statement to Oklahoma Gazette. “We request the District Attorney of Orange County, California, to conduct a thorough and detailed investigation of Shayan Mazroei’s murder, extending the investigation to include other individuals who might bear responsibility for this murder. UIASO also urges the authorities to provide a detailed response to all concerns that have been raised in this case.

When incidents of senseless crimes take place — ones in which characteristics such as a victim’s race, religion, sexual orientation or ethnicity are obvious — many community members and those far removed from the crime push for prosecutors to bring hate crime charges. Dee Patty, an Oklahoma City University criminal justice professor, said proving bias often poses a challenge for prosecutors.

“Prosecutors have to be able to prove bias to file a hate crime charge. Proving bias is sometimes extremely difficult,” Patty said. “Hate crimes or bias-motivated crimes are like any other crimes. Not everyone is going to come forward and report them because of fear, retaliation or they fear nothing will be done.”

Based on his prior criminal history, if Tanber is found guilty of murder, he will be sentenced to a minimum of 76 years in prison. If he is convicted of a hate crime, it will ensure a life sentence and be documented as such.

Legaard wants the murder recognized as a hate crime to send a message that prejudice should not be tolerated. If this can happen to her young boyfriend with Persian features in Orange County, she said, it can happen anywhere.

“It is heartbreaking to know these people had so much hate for no reason,” Legaard said.

Print headline: Seeking justice, Is the murder of a former Oklahoman in southern California a hate crime?

>> 12 hate crimes were reported to law enforcement in Oklahoma City; hate crimes motivated by ethnicity bias accounted for one offense.