Oklahoma Muslims have faith amid fear 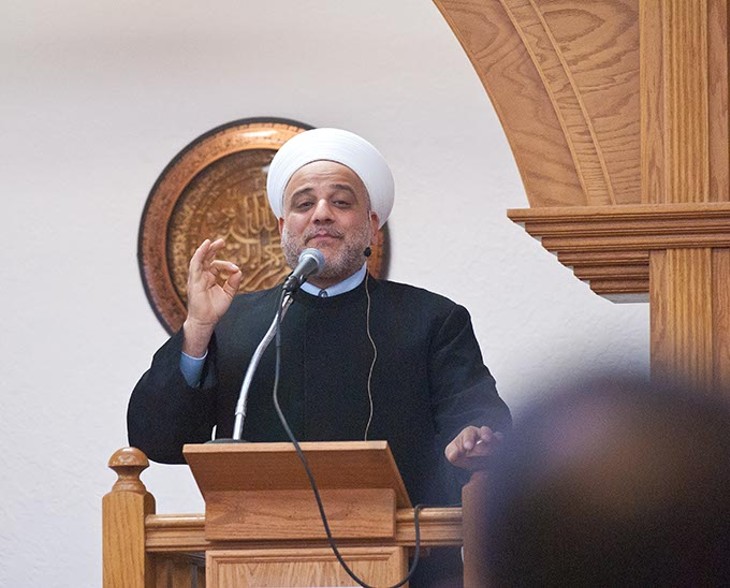 As Imam Imad Enchassi looks out over the hundreds of Muslims gathered for Friday afternoon prayer, he can see the stress in many faces.

There is nothing comfortable about being Muslim in modern America as politicians, cable news talking heads and popular television series project Islam as a radical and violent religion.

Enchassi, who oversees a congregation at the Islamic Society of Greater Oklahoma City in northwest OKC, said last month’s horrendous decapitation of a Moore woman by a man who claimed to be Muslim was a tragedy for the victims and their families.

Though the Federal Bureau of Investigation said it found no ties to terrorism in that case, Enchassi said it is a catalyst that puts Muslims on edge as they encounter fear, misunderstanding, accusations and hate-imbued scowls.

‘We must love all humanity’

It’s not just high-profile politicians and individual acts of violence in the name of Islam that put the state’s nearly 40,000 Muslims on edge. In between the headlines, there are passing remarks in grocery stores, bumper stickers on trucks telling Muslims to go home and extra stops and searches at airports, all incidents that local Muslims said are a common occurrence.

In Oklahoma, a state that likes to promote religious values, individual freedom and common courtesy, Muslims often feel like their faith is under attack, that they lack the same type of freedom afforded to others and that the state’s customary friendly wave to a stranger is replaced by accusatory stares.

The irony of associating violence with the Islamic faith is apparent minutes into Enchassi’s message to those gathered for Friday prayer.

“We must love all humanity,” Enchassi said. “A person that kills one soul, it’s as if he has killed humanity.”

The message continues with a theme of peace and love toward others as over 1,000 practicing Muslims are kneeled in front of Enchassi. Throughout the mosque, there are posters that advocate nonviolence and peace and specifically rebuke acts of terror committed by others in the name of Islam.

“The Quran teaches us that only love can combat hate, only good can combat evil,” Enchassi said. “Hating back is not going to solve the problem; it’s going to amplify the problem. 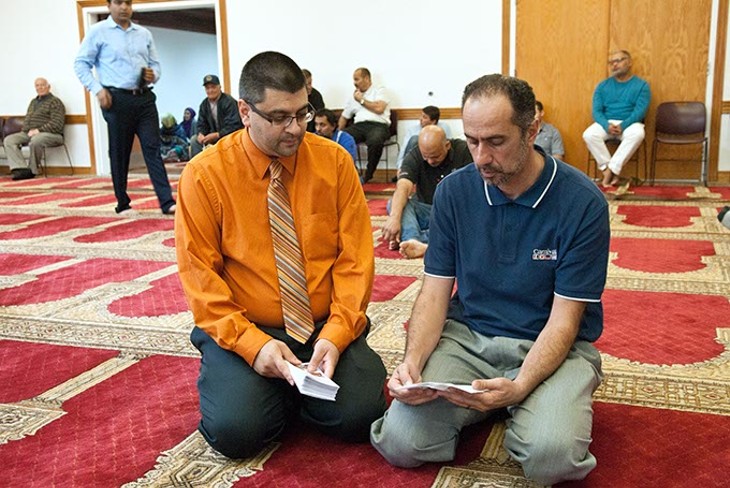 America’s Muslim community has been the target of fearmongering and scrutiny for decades, which increased following the terrorist attacks of 9/11.

However, 14 years later, amidst continued reports of Islamic extremism across the world, Muslim community leaders say they continue to be targeted for abuse.

The Federal Bureau of Investigations (FBI), which tracks ethnically motivated crimes, reports that hate crimes against Muslims jumped 50 percent in 2010 and has remained high over recent years.

“The actual number of reported anti-Muslim hate crimes is small for a country the size of the United States, but the FBI statistics are known to be notoriously understated, in part because more than half of hate crimes are never reported to police,” reported the Southern Poverty Law Center in its spring Intelligence Report. “Two major Department of Justice (DOJ) studies have indicated that the real level of hate crimes in America is some 20 to 30 times higher than the numbers reported over the years by the FBI, which are simply compilations of state statistics.”

Earlier this year in Tulsa, a man was charged under the state hate crime statute after allegedly hitting a woman who was wearing a headdress and vandalizing her car while calling her a “fucking Muslim bitch,” reports claim.

‘America is my home’

In addition to practicing their faith, communities like the Islamic Society of Greater Oklahoma City seek to help others learn more about Islam. During a recent event at Penn Square Mall, Muslims publicly protested the actions of the radical Islamic State group (ISIS), the Middle East terrorist group responsible for the decapitation of Westerners.

Local Muslims also have been heavily involved in relief efforts following recent storms. Several groups, including the Oklahoma chapter of the Council on American-Islamic Relations (CAIR), regularly meet with lawmakers to promote equality and understanding.

However, Adam Soltani, CAIR executive director, gives a long pause when asked if he believes bigotry is waning toward Oklahoman Muslims.

“The difference we see now, over the past several years, is just having that support from the interfaith community, social justice and minority groups, is just unbelievable,” Soltani said.

Days after the workplace violence in Moore, the Oklahoma Conference of Churches released a statement in support of this state’s Muslim community.

“Along with our Muslim brothers and sisters, we affirm that true Islam is, in essence, a religion of peace and that those inflicting violence in the name of Islam are perverting Islam for their own ends,” the statement said.

Soltani said that interfaith and community support also has grown in recent years. However, there is still room to grow.

“By the sheer influx of hate mail and calls we receive, we still have a lot of work to do,” he said. “But we are still working.”

A recent conversation with several practicing Muslims in OKC revealed gratitude for those who are accepting of them, but at the same time, they are hurt by the way their home country and state sometimes rebukes their faith.

“People may say, ‘Go back to where you came from,’” one Muslim man said. “But America is my home. I am just as American as they are.”

Print headline // Faith and Fear, American — and Oklahoman — Muslims and Christians, among others, work to educate our community and dispel fear about Islam.